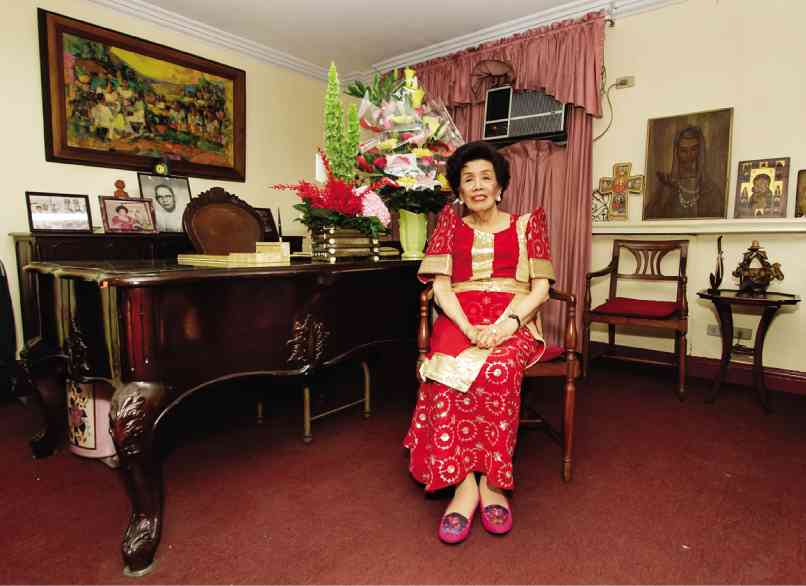 HELENA BENITEZ: Something out of this world. Because I have never had it before, this feeling. All of a sudden, everything is bright. Because everything happens to be together. It’s wonderful. LEO M. SABANGAN II

It was her 100th birthday, and Helena Benitez—outstanding public servant, admired educator, pioneering woman leader—was not going to waste any time. The special day was besides, one that not many live to see.

“You know, when you come to my age, every little thing, every little bit that people do for you gets magnified,” Benitez told her guests following the Mass said in her honor.

She stood out in the crowd in a terno as red as her lipstick, generously embellished in gold for the twice-golden girl.

“It’s not just thank you or a double thank you, it’s 10 times thank you,” said the centenarian, standing up to acknowledge the applause from her front-row seat inside the hall named after her father, Conrado, at the family-built Philippine Women’s University (PWU) in Manila.

Has seen it all

Family, friends and familiar figures in Philippine politics gathered at the PWU flagship campus last Friday for the centenary celebrations for Benitez, a former senator and founder of the world-renowned Bayanihan national folk dance company who is treasured for her innumerable contributions to the country.

Among those in the crowd of about 300 were Senators Loren Legarda and Cynthia Villar, former senator Heherson Alvarez, Buhay party-list representative Lito Atienza, PWU officials and alumnae, and representatives from the Girl Scouts of the Philippines, an organization Benitez cofounded with the late Josefa Llanes Escoda just before World War II broke out.

Another grandnephew, Freddie Benitez Reyes, said Benitez is a woman who has seen and survived it all: two world wars, the bubonic plague, and every single Philippine President since the country became a republic.

For the birthday celebrator, it was a moment she could only describe as otherworldly, a feeling that could not be put into words.

“Well you know, [it’s] something out of this world. Because I have never had it before, this feeling, you know. All of a sudden, everything is bright. Because everything happens to be together, and all of a sudden, you see it there. It’s wonderful,” she said, her smile that of someone experiencing something for the first time.

“That’s very hard to describe, the feeling inside. It’s something only the owner knows,” she said.

Benitez spoke to the Inquirer just before the party began, sitting for the interview at the PWU chair’s office where she keeps the memorabilia of a storied lifetime.

A blown-up photograph of her father serves as the backdrop behind her desk, surrounded by smaller framed mementoes: a photo with former US Secretary of State and First Lady Hillary Clinton taken on June 4, 1993 at the White House, and a souvenir photo from the day she received the Order of Sikatuna (rank of datu) in 1998, the first Filipino woman to receive the honor.

Plaques of recognition from all over the world—only a fraction of the more than 160 international honors she has received—occupied a shelf on one side of the room.

Religious images made most every corner of the room an altar, reflecting the kind of religious devotion that defines Benitez, a single woman all her life but indeed married to God and country.

“That’s the main thing in life. Your relation to God. You have regular hours of praying, but all the time, at the back of your head, you always have a straight line to God,” said Benitez.

She regards public service with the same amount of reverence, saying love of country has served as a guidepost all her life.

“I’ve always worked for the country. I always remember I am a Filipino. When you do that, then you have a guide. If you have decisions to make, you choose that which will be for the good of your country. So that’s very simple,” she said.

That is the kind of legacy that Benitez continues to pass on to generations of Benitezes, continuing a line intertwined with public service that began with her father, Conrado, a member of the committee that drafted the 1935 Constitution, and mother, Francisca Tirona, the founder of the PWU and the Civic Assembly of Women of the Philippines (which is now known as the National Council of Women of the Philippines).

“I think all of us [were taught] to serve the country in every way we could, that we must learn that we are not just for ourselves, just oriented toward profit, toward business, but we must constantly serve for education, for community service. That’s our calling,” said former PWU president Amelou Benitez Reyes, citing the greatest lesson she has learned from her aunt.

For Reyes’ son, Freddie, the PWU vice president for external affairs, the greatest takeaway from his grandaunt is her courage and calm.

“I think what I learned from her is to never be fearful of anything, never to be fazed by any obstacles. You know, she’s always remained calm. And so everytime we have a problem, I always go to her and she’ll explain ‘don’t worry, things will always work out,’” said the younger Reyes.

It is with the same positive outlook that Benitez spends her days, even when at times it would mean getting some bad news.

“[It happens] all the time. It’s always like that. Every era has its own (controversies),” said Benitez with a laugh, when asked what she thought about the recent scandals hounding the Senate, a chamber she served from 1968 to 1972.

“Times are hard, you know, so it’s got to be all over, it’s not just here in the Philippines. All around the world, the times are hard. And we have to learn, we just have to learn to overcome it. That’s the whole point. If we’re together, then we can face it,” said Benitez, who begins her day reading three newspapers and follows news on television between naps.

It may well be her secret to longevity too, along with good genes and a diet that does away with any excess. Her nurses make sure she takes her maintenance pills to keep her blood pressure and cholesterol in check, but other than that, the centenarian is in good health.

“Don’t eat too much. It’s the abundance, it’s the sobra. Busog na tayo sige pa (We carry on eating even when we’re already full.) I think that if you moderate what you eat, you will find that it’s better,” said Benitez, who is known to eat sparingly, especially at night.

She remains sharp as she is “never idle,” still attending board meetings at the PWU, going out for appointments and looking through old files at Mira-Nila, the Benitez family home in Quezon City that has been declared a national heritage site.

“In the morning, she would read the newspaper, then if there’s nothing to do, she looks at old files and newspaper clippings. Then she takes naps or watches TV,” said Christa Rollorata, one of Benitez’s two private nurses.

Benitez also likes going to the mall, where she takes short walks but needs the help of a wheelchair most of the time.

Having been blessed with a century of existence, Benitez said she has nothing more to wish for.

“As they say, birthdays are not a matter of numbers, but really a matter of years: the years that life has given to you and the years you give back to life. Tita Helen has been given a hundred years of life. But I dare say that she has given back much, much more than a hundred. She has inspired so many people of different generations, ages,” said Fr. Paul Marquez, a former PWU chaplain, in a tribute to Benitez.