Centenarian Helena Tirona Benitez: ‘It is a great privilege to be alive’ | Inquirer Lifestyle ❮ ❯ 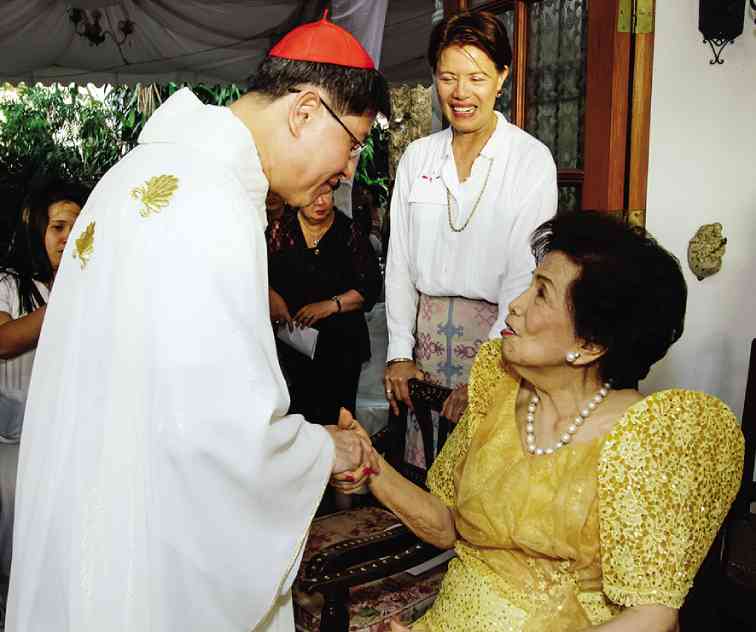 Centenarian Helena Tirona Benitez: ‘It is a great privilege to be alive’

But the open secret among the descendants of her younger brothers Tomas and Alfredo is that their Tita Helen is a beauty junkie.

“Twice or thrice a week she goes to the parlor. Tita Helen wants to make sure her hair, fingernails and toenails are well-groomed. Every week without fail, except when she’s abroad,” said Rosary L. Benitez, eldest child of Tomas.

And even when she’s out of the country, her aunt, Rosary said, has suki among salons in New York and Switzerland whose attendants are familiar with her.

“They know her. ‘Oh, Ms Benitez, so glad you can come.’ And if you notice, she still has very thick hair,” Rosary added.

Armi S. Benitez, wife of Rosary’s younger brother Willy, spends Sunday lunches with her husband in Mira Nila, the family’s ancestral home in Quezon City that has been declared a heritage site by the National Historical Commission of the Philippines.

Armi said her Tita Helen always comes down the spiral staircase “all dressed, ayos na ayos. And she’s very appreciative of all family members who visit.”

Younger relatives came to Mira Nila in hordes in the afternoon of June 23 and offered a “culinary tribute” to Helena.

Seated at the foot of Mira Nila’s winding staircase, the country’s poster girl of mid-20th-century women empowerment looked radiant in her canary yellow terno, her lips dabbed crimson, and wearing a set of pearl earrings and a pearl choker.

As expected, her nails were impeccably manicured.

Why a culinary tribute? Rosary’s granddaughter Stacey explained it’s because the celebrant is a foodie.

Every time Lola Rosary brings her to Mira Nila, Stacey said Helena always asks her what kind of food she craves.

“She’s always giving away popcorn and urging us to eat,” said the sixth grader who came all the way from Cavite to greet her great-grandaunt.

But food is just one manifestation of Helen’s generosity.

Willy will never forget how his Tita Helen went out of her way from Manila in the busy 1970s and flew to Egypt to straighten him after a bout of youthful folly abroad.

Willy said he was still young when his father Tomas died. Tita Helen, as her late brother’s elder sister, took it upon herself to help look after Willy and his eight siblings.

“She always kept an eye out for us. Before my father died, he asked Tita Helen to allow each of us to spend a year abroad after graduating from high school and just before going to college,” the nephew said.

She sent Willy to Egypt. It was martial law in the Philippines and travel was difficult.

“It was the only place I could go to because of its offer of an Islamic scholarship and [President Marcos] wanted to develop ties [to Egypt] given the Muslim rebellion in the south,” Willy explained.

The lack of parental supervision proved detrimental to Willy. “I was young, irresponsible and spoiled. Tita Helen went there to discipline me. She got me out and that [experience] really changed me. The fact [is] that she took time to help [me].  [So] I remember that every time [when] she needs help (because of advancing age),” said the nephew, now an entrepreneur.

Helena’s contributions to women empowerment, education and the preservation of the environment are not lost on the younger Benitezes.

Negros Occidental Rep. Alfredo Benitez, a great grandnephew, said his surname has given him credibility as an education advocate.

After all, Helena’s parents, Dean Conrado Benitez and the former Francisca Tirona, were also heavily identified with education for their key roles in the development of the Philippine Women’s University.

Alfredo is the son of former assemblyman Jose Conrado “Jolly” Benitez. Jolly is the son of Helena’s brother Alfredo, the third child of Conrado and Francisca.

Rep. Alfredo is now focused on a pet bill introducing digital technology to public schools. He said Tita Helen was “very receptive” when consulted about the measure that urges creativity and divergent thinking among students.

More than that, Alfredo said she made sure his generation of Benitezes was taught “old school and traditional values like table etiquette” while staying in Mira Nila.

“I remember her as very prim and proper,” the grandnephew said.

Rosary was blessed to have witnessed Tita Helen in action when she was senator in the pre-martial law 7th Congress.

How was her aunt inside the session hall?

“She has always been a cool person.  She never raised her voice [during debates]. That was unheard of,” Rosary noted.

Helena herself was mum when asked to comment about the sorry state of the Senate where she once served.

Rosary, however, said her aunt reads all the newspapers every morning and “once in a while expresses concern about what’s happening.”

Rosary added that Tita Helen would eventually tell those present that all issues hounding the Senate in particular and the government in general “would be resolved in God’s time.”

The niece also said her aunt had always reminded them as children to “always be nice, to be kind to everybody.”

She said her Tita Helen explained that people “don’t know who they are going to encounter and whether those they do might be having some kind of problems.”

The one thing that really stuck, Rosary said, is how Tita Helen behaves before the househelp.

“She always says ‘thank you,’ and she has instilled the same thing in us. She does not use a different tone of voice on the help.  She does not like it when other people make sutsot (calling out by just making sounds) on the maids. She calls that mistreating the help,” Rosary stressed.

This level of concern extends to those who have gone ahead.

Helena was given the mic right after the Mass celebrated by Manila Archbishop José Luis Antonio Cardinal Tagle that took place before her culinary party. She said many of her friends had gone ahead to the Great Beyond and asked those present to pray for them.

“It is a great privilege to be alive. Please say a prayer for the souls of the departed, those relatives and others not being prayed for would be prayed for on this day… that their souls go up to heaven,” she appealed.

Niece-in-law Armi said she is still astounded by Tita Helen’s energy despite her age.

“She told us to travel while we’re still active. After learning that we’ve gone to Europe, she started telling stories of her own European [adventures], the friends she met while she was there. She is so interested, so curious, very connected,” Armi pointed out.

One question always asked of Helena is whether or not she regrets not getting married. Obviously not.

Otherwise, she would not have become the first Filipino and woman president of the United Nations Environment Program government council or first Filipino chair of the UN Commission on the Status of Women.

However, she would not advise singlehood on any woman. Decisions like this are on a case-by-case basis, she said.

What is important, she noted, is that advancements in women’s rights should not pit females against males.

“We used to be so far behind. [Right now] we should not just try to be like men but look for the roles we have to play WITH the men. We should work with them and not always try to compete,” she explained.

Helena Benitez believes men and women were created to assume different roles. “The combination of roles we play is what makes our society,” she pointed out.