‘(I was a) lost mermaid… but I am your one and only Sea Princess. I’ll always swim to you, I’ll always find you’ | Inquirer Lifestyle ❮ ❯ 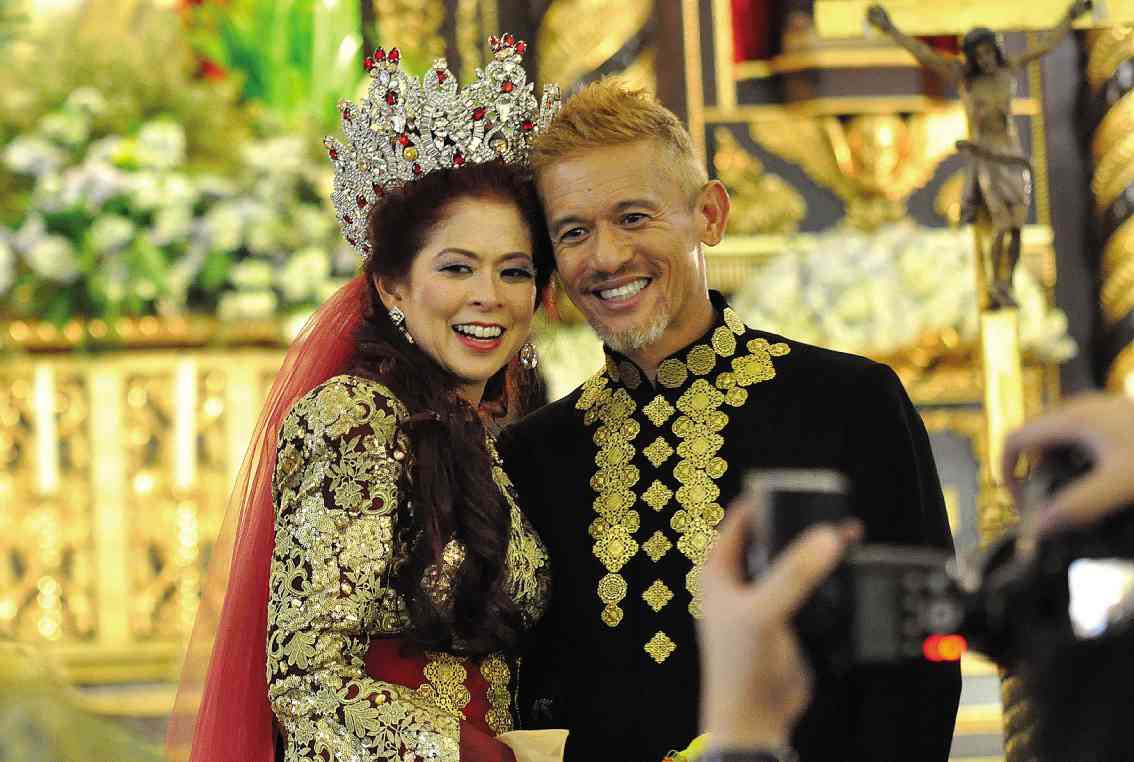 TESSA: “I am your Sea Princess. I will always swim to you. I love you forever.” Dennis: “Wherever our lives’ arcs may lead, I trust that those arcs circle back to ourselves.” RICHARD A. REYES

‘(I was a) lost mermaid… but I am your one and only Sea Princess. I’ll always swim to you, I’ll always find you’

The heat was sweltering outside the Santuario de San Antonio in Forbes Park. But guests at the 20th wedding anniversary celebration of Dennis and Tessa Valdes gathered inside the church were dressed for winter.

There were pelts, feathers, capes and crowns. Women wore braids (and hair extensions enough to fill a chest) as accents to gowns heavy with beads and brocade.

Dennis was the first to emerge from the white bridal car. He wore a black Rajo Laurel ensemble with gold embroidery at the torso, a polite nod to the “Game of Thrones” (GoT) theme that Tessa playfully insisted on.

Truth be told, the couple’s medieval-theme wedding in 1994 preceded the costumes of the popular HBO series.

“I was ahead of them, di ba,” Tessa asked cheekily at a meeting with event planners a week before.

She wore a ruby-encrusted crown and a gold and burgundy gown whose skirt Laurel fondly smoothed just before photographers gathered to take pictures along the Santuario driveway.

That done, Dennis entered the church.

“Are you Joffrey,” asked a friend who noted the groom’s newly blonde hair. (Joffrey was the light-haired king who ruled the seven kingdoms in GoT’s early seasons.)

The ceremony that was to start at 3 p.m. was half an hour late.

This time, the entourage had four Siberian huskies escorting the sponsors. (In June 1994, an Afghan hound turned the heads of bewildered wedding guests.)

Finally, the church’s main door opened. Tessa seemed to float in a haze of white smoke. Behind her were two handsome thoroughbreds that preferred to guard the entrance.

Why huskies and horses? Tessa explained that St. Anthony of Padua, after whom the church was named, is the patron saint of animals.

Guests erupted into wild applause as Tessa walked down the aisle. She suddenly gathered her skirt and danced a merry jig as she made her way toward Dennis.

Main celebrant Msgr. Manuel Gabriel noted that Tessa’s eyes were welling up when she reached the altar.

She recalled meeting Dennis for the first time as “a beautiful accident,” dubbing their whirlwind romance as “the most complicated love story.”

Before joining the corporate world, Dennis was the diving instructor of Gigi Santos who later taught Tessa.

The country was celebrating the Edsa People Power Revolution’s seventh anniversary in 1993 when Gigi asked Tessa if they could pick up her diving instructor from a five-star hotel in Makati City on their way to Anilao, Batangas.

Tessa was already a single mother then to 8-year-old Bryan. She was also involved with someone else.

Tessa said she did not really pay him attention then. Dennis was just one diver in a posse of diver friends. Besides, “he looked too serious and boring.”

Their second meeting was at a golf game the following October. Dennis lost. The wager was a dinner date “in the expensive restaurant at Diamond Hotel.”

Then there was also a trip to Hong Kong where Dennis was based that time. They watched an opera.

Tessa asked Dennis to fly home to Manila and attend a Halloween party with a “Mad Max” theme.

It was Dennis’ first meeting with Tessa’s parents. He donned whips and chains.

Alex and Marixi Prieto thought their daughter was dating a misfit.

But Tessa was thinking of more serious stuff. She was about to turn 30, her brother Louie had died just months earlier, and she was asking herself where her life was leading to.

“We were joking about a December (1994) wedding that was moved to March because I got pregnant. I lost that baby,” she recalled.

The loss made Tessa rethink their wedding plans. “Maybe it was a sign,” she said.

Dennis, however, was circumspect and suggested they reset their wedding to June.

“This was a time before cell phones, and from October to December (1993), I would see him only on weekends since he was still living in Hong Kong. The time we were together before getting married was only four months,” Tessa said.

As things fell into place, Tessa conceded that “everything was fated. I believe in timing and everything. I was even forcing him to go out with Karla. Funny because Karla became our bridesmaid.”

Monsignor Gabriel was a co-celebrant when the couple married on June 24, 1994.

“Twenty years ago you forgot your arrhae and rings and we had to make do with what we had,” the priest recalled.

“Now you forgot your hanky,” he gently reproached the teary-eyed Tessa with a smile.

In a later huddle at the Manila Polo Club reception, Monsignor Gabriel noted that the original wedding missalette used in 1994 was in Old English (thee, thine, thou, and “th” was used in place of “s” for singular verbs) and how he agonized while reading the text.

Thankfully, Tessa agreed to use contemporary English this time.

Son Bryan recited the First Reading, a passage from the Book of Tobit more commonly referred to as the Prayer of Sarah and Tobias: “I take this wife of mine not because of lust, but for a noble purpose…”

Daughter Annika delivered the Second Reading, another popular verse from the First Letter of Paul to the Corinthians: “Love is patient, love is kind… love never fails…”

The priest’s Gospel reading was taken from the evangelist Matthew: “A man leaves his father and mother and becomes attached to his wife…”

In his homily, Monsignor Gabriel lauded Dennis for “assuming so many characters for Tessa because of his love in his heart. Honesty builds a marriage and your radical honesty kept you from being lost in the woods.”

Tessa veered away from the prepared text when it was time to renew her vows.

Her voice breaking, Tessa said she was a “lost mermaid… but I am your one and only Sea Princess. I’ll always swim to you, I’ll always find you. You can’t get rid of me. I’ll love you forever.”

For his part, Dennis vowed that “wherever our lives’ arcs may lead, I trust that those arcs circle back to ourselves. I love you, honey.”

Luis Antonio Cardinal Tagle, a special guest, later stood up and noted the significance of their wedding date. June 24, he said, is the solemnity of the birth of St. John the Baptist.

The main lounge of Manila Polo Club was dressed like a banquet hall with ceiling-to-wall drapes that matched Tessa’s burgundy gown. (She would later change into two more confections—a white gown by Slim’s and a pink number by Albert Andrada.)

The medieval vibe was unmistakable. There were candelabras, coats of arms and tents. At the far end of the corridor leading to the venue, a photo booth featured an iron throne with swords for a backrest.

Guests who came early had their fill of wine and cheese, fruits, vegetables and bread at the stalls arranged like a market scene that faced the polo field.

There were entertainers on stilts, horses, archers and fire dancers. At sunset, guests were treated to a 10-minute fireworks display that signaled the start of the party.

Waiters paraded plates of cochinillo before bringing these to the guests.

A video showed Tessa dressed as a platinum blonde princess and Dennis as a pirate.

The cover of the couple’s souvenir program reprises their looks.

Then, Tessa’s firstborn Bryan stood up, confessing that he was quite confused when Dennis came into their lives.

“Who is this guy marrying my mom?” he recalled. Turns out, he added, that Dennis “was someone I really needed. Not a father figure but a father.”

Bryan also reminded Tyrone, Annika and Athena that their brood is “extremely fortunate” to have mom and dad.

Tessa and Dennis were called to slice the scene-stealing reindeer wedding cake made by Penk Ching. Towering several feet above the couple, the reindeer had gold antlers, its collar a crown of gem-encrusted gold and its torso covered in silver swords.

Brother-in-law Philip Romualdez changed into a white tux before singing a surprise number, “The Way You Look Tonight,” as Tessa and Dennis danced and kissed at the end of the song.

At his turn at the mic, best man Joey Benedicto said he had known Dennis since grade school and that his friend was a nerd.

“He was already reading bestsellers while we were still into the Hardy Boys,” Joey recalled.

He added that he was not aware Dennis was dating Tessa until Dennis announced their wedding plans. “I admit I (thought) it wouldn’t work out, but I was pleasantly wrong,” Joey said.

He asked Tessa, however, to settle on a Roman toga theme for her golden wedding anniversary, “or hindi ako aabot sa banyo.”

Sister Sandy revealed she had to do research on GoT before the event. Her effort churned out details on “death, stealing thrones… I was like, ‘what am I gonna say using a quote?’”

She found “something apropos, for those who celebrated [marriages of] 20 years or over: Winter is coming! Just kidding!”

Turning serious, Sandy focused on Tessa and said: “We may be as different as the sun and the moon. But the same blood flows through both our hearts. I need you as you need me and (her voice breaking) I love you as you love me.”

Sandy then shifted to Dennis. “Most men would rather deny hardship than face it but you, Dennis, are not like most men because ‘the man who fears losing has already lost.’  So, my dear brother-in-law, embrace change. Except the choice of your wife.”

And guests shouted, “To the House Valdes!” to that.

Note: In lieu of gifts, guests were asked to donate to the “20 Homes for 20 Families to Mark 20 Years,” the couple’s effort to raise P1.6 million that will be used to build typhoon-proof houses for survivors of Supertyphoon “Yolanda.”