No heavy traffic could stop fans from watching this gig | Lifestyle.INQ ❮ ❯ 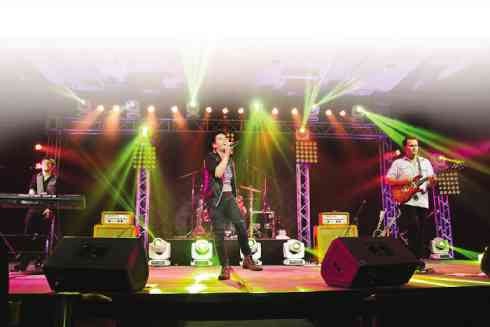 KURT Schneider, Sam Tsui, Jason Pitts. INQSnap this page (not just the logo) to listen to Kurt and Sam’s song for their Filipino fans. PHOTOS BY BYRON HIPOLITO

No heavy traffic could stop fans from watching this gig

The horrendous traffic during Thursday’s heavy downpour didn’t stop fans of Sam Tsui and Kurt Hugo Schneider from storming the SMX Convention Center for the second of the duo’s two-night concerts in Manila.

Tsui and Schneider, who rose to fame after posting on YouTube in 2009 a unique a cappella medley of Michael Jackson’s greatest hits, knew that a good show wasn’t enough for those who came despite the circumstances. It had to be the best performance night in their seven-city Asian tour.

And they gave just that. For most of the two-hour set, Tsui’s energy never seemed to dip; it was infectious even. The observation was that his enthusiastic performance could rival that of Gary Valenciano’s.

Schneider on keyboards charmed the audience with his boyish good looks.

Tsui became popular on YouTube because of his covers and creative medleys and mashups. But what endeared him to his fans was the fact that he wasn’t just a cover artist—he also writes his own songs.

In fact, Tsui performed most of his original compositions from his latest album “Make It Up,” interspersed with the medleys and mashups that had gone viral on the video-sharing site.

“‘Make It Up’ is about not exactly knowing what you’re doing and sort of trusting your gut and doing it,” said Tsui.

He added that the album reflects his and Schneider’s journey as artists.

Admittedly, the duo didn’t expect that they’d reach this point in their career after posting the Michael Jackson medley.

“We’ve been doing videos for about a year, not as frequently as we do now, but none of the 20 videos we uploaded blew up,” Schneider said, “[despite the fact that] we’ve been putting up stuff that we both thought was great.”

Then, in July 2009, a month after Jackson’s death, they decided to put out the video as a tribute to the King of Pop.

“[The medley] was a creative take on his music and it was fully a cappella, which was gaining popularity then, and we did some really cool visuals,” Tsui said when asked on what made the video distinct that it became their first to hit a million views.

From there, they would go on to make more medleys, mashups and covers. To date, Tsui and Schneider have made more than 200 videos and have a combined 5.7 million subscribers.

“It’s exciting at every point. Even when we had a hundred subscribers, it meant that we had a hundred people in the world that we didn’t necessarily know who were listening to our music,” Tsui said. “It’s a beautiful thing because it meant they appreciate what we’re doing. Now that a lot of people listen to us, we feel like we owe it to them to keep putting out music and good content to keep them entertained.”

With various technologies available today in the music industry, one is wont to doubt an artist who puts out content online. One would comment that he/she is auto-tuned.

That’s not the case with Tsui, whose biggest dream is “to voice a Disney prince.” He actually sounds as good as he is on his videos.

Our favorites were his mashups of “Frozen’s” “Let It Go” and Passenger’s “Let Her Go”; OneRepublic’s “Counting Stars” and Pitbull and Ke$ha’s “Timber; and Bruno Mars’ “Treasure” and Daft Punk’s “Get Lucky.”

From his original songs, an easy favorite was “Shadow,” which brought out his intimate side. “Bring Me the Night,” a duet with GMA 7’s Rita de Guzman, was heartwarming.

We’re pretty sure “Wherever You Are” would soon become an anthem in clubs.

“When we do a project, we want it to sound huge and badass. That’s what we strive for,” Tsui said.

Tsui and Schneider have definitely come a long way from being YouTube artists. Now that they are carving their mark as independent artists, Schneider said that their edge is the “Sam Tsui-style” of musicality. “It’s musical-theater-inspired in terms of harmonics; very pop delivery and production. It’s a unique sound in today’s pop world.”

It’s the kind of unique sound that the young iPad-toting and monopod-equipped crowd went gaga over on a weekday. Despite a number of parents with burning stares, surely the teens didn’t mind as they were euphoric, especially when Tsui announced, “We’ll be back Manila!”