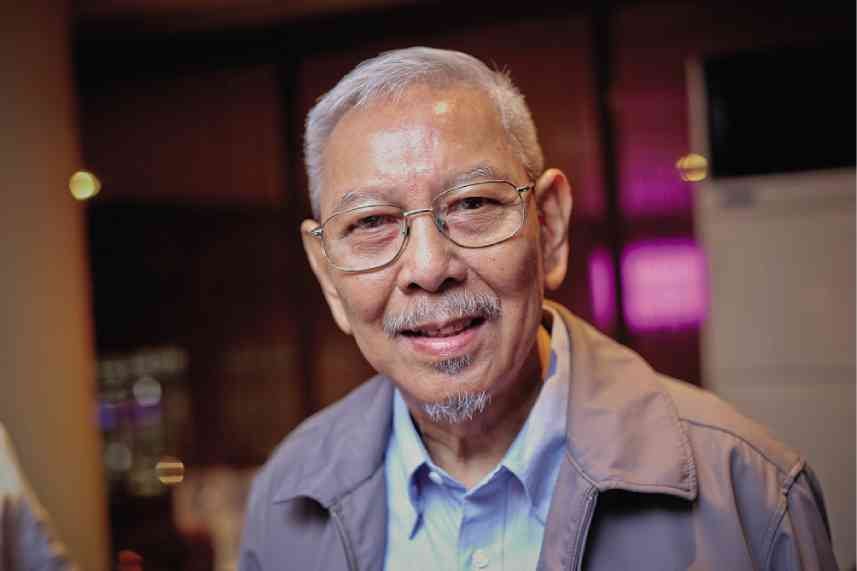 Ramon P. Santos and Francisco F. Feliciano are celebrated contemporary composers and noted pedagogues. They have received international awards and their works have been critically acclaimed.

They were buddies at the University of the Philippines College of Music, where they took their undergraduate course in composition and conducting.

Both come from the vast province of Rizal and were born on the same year, 1941: Santos was born in Pasig and Feliciano in Morong.

Santos earned his Master of Music (with distinction) and PhD at Indiana University and State University of New York at Buffalo, respectively. He was a full fellow at the Summer Courses in New Music at Darmstadt, Germany, and undertook postgraduate work in ethnomusicology at University of Illinois under grants from the Ford Foundation and Asian Cultural Council.

He was elected as member of Honor of the Asian Composers League, which he led as chair in 1994-1997.

He was elected vice president of the International Music Council of the  Unesco, 2001-2005,  in which he served as the first Filipino in the five-man praesidium of the highest governing body of the international music community.

At UP Diliman, he is emeritus professor and former dean of the College of Music. He is secretary general of the National Music Competitions for Young Artists (Namcya) and the League of Filipino Composers. He is a former commissioner of the NCCA and artistic director of the CCP.

He took up special studies in church music at the Berliner Kirchenmusikschule; obtained a diploma in music composition at the Hochchule der Kunste in Berlin; and received his  Doctor in Musical Arts from Yale.

He is founding director of the Asian Institute for Liturgy and Music; and is president of the Samba-Likhaan Foundation: Asian School of Music and the Arts.

Santos and Feliciano have composed groundbreaking works that incorporate Philippine as well as Asian musical concepts and traditions.

Their works have significantly contributed to bringing about a strong sense of Filipinism so necessary in projecting the Filipino identity through the musical arts. Moreover, their works have been performed abroad.

Santos’ compositions are written based on concepts and aesthetic frameworks of Philippine and Southeast Asian artistic traditions, featuring elements from Western and non-Western sources, including various combinations of orchestral instruments, Javanese gamelan, Philippine indigenous instruments, as well as different styles of vocal production.

One piano composition, “Kulintang,” is popular with pianists. Written for solo piano; this piece evokes the sound of gongs and employs the technique of their playing to capture their inherent soundscape.

In particular, it tries to convey the sound of the kulintang, an instrument from Mindanao, than simply transcribe a kulintang melody into the piano. The kulintang is heard and played with kulintang ensembles, similar to the Javanese gamelan.

Santos has organized the International Rondalla Festival and Composers’ Forum on Traditional Music. He has explored the Philippines’ musical and cultural global linkages and promoted the preservation of our rich musical traditions through cultural-education programs.

Feliciano writes in the Neo-Romantic style, a mixture of atonal and tonal pitches and materials. The style is highly passionate and contemporary, without abandonment of melody.

Feliciano has brought out the “Asianess” in his music and contributed in promoting awareness, especially in the West, of Asian culture as a rich source of inspiration and celebration of ethnicity.

He has brought out the unique sounds of Philippine indigenous music in his compositions, which have high technical demands, elevating Filipino artistry and promoting its appreciation worldwide.

His choral compositions such as “Pokpok Alimpako” and “Pamugon” incorporate many subtleties of rhythmic vitality and intricate interweaving of lines inspired by the songs of cultural communities.

These works are part of the “Mindanao Trilogy,” a choral suite that includes “Enduken.” Through the trilogy,  Feliciano dramatizes how the conflict in Mindanao results from a cultural factor: the failure to appreciate Mindanao’s culture, which is entrenched in its traditions, beautiful music being one of them.

The suite has been performed by the country’s top choirs—the Madrigal Singers; UST Singers; UP Singing Ambassadors; Novo Concertante—for which they have won international honors.

Bringing out indigenous culture through music is evident in Feliciano’s opera “La Loba Negra,” in “Ashen Wings,” in the musical theater “Sikhay sa Kabila ng Paalam,” and in the ballet music “Yerma.”

In these works, he brings out Filipino mysticism in simple harmonies that captivate and charm the listener. Disclosing ideas in their simplest state is a master stroke that has produced a haunting and lasting impact on audiences.

“La Loba Negra,” for instance, employs the pasyon in the introductory part. In one of its productions, it featured the pasyon singers from Feliciano’s hometown. The moving concluding chorus, “Sisikat ang Araw,” utilizes the ever-popular kundiman “Bayan Ko.”

He has propagated a new language for religious music through the incorporation of indigenous cultures, particularly traditional music, rituals and dances; this has earned him respect and esteem from musicians and church leaders worldwide. This has also resulted in a renewed worship repertoire that has seen print in many hymnals worldwide.