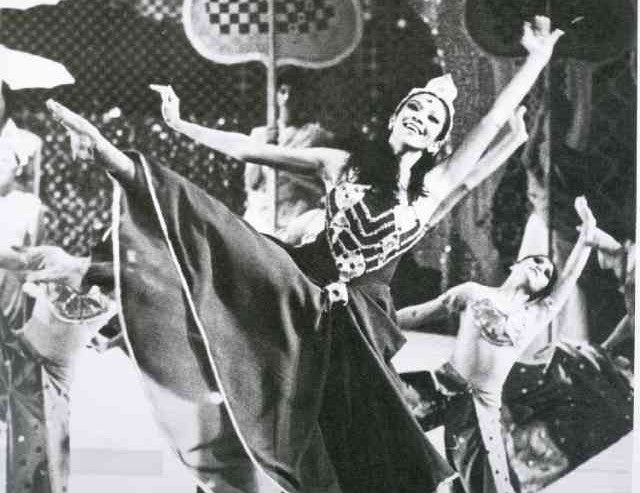 Dancer-choreographer Alice Garcia Reyes’ multifaceted pioneering role in establishing contemporary dance outside of the older traditions of ballet and folk dancing in the Philippines has earned her the  honor of National Artist.

Her brilliance is exemplified in not only in her  works but also in her leadership. Reyes is instrumental in professionalizing  dance in the Philippines and raising standards to the global level.

What began as  an ensemble group, Alice Reyes Modern Dance Concert evolved into the Cultural Center of the Philippines Dance Company  to the present Ballet Philippines (BP).  (She was helped by Eddie Elejar.)

When the company went on world tours, foreign audiences lauded the dancers for their high technical standards and expressiveness.

During Reyes’ term as president and artistic director, BP had a signature style—a mixture of the linear purity and ethereal quality of ballet complemented by the movement of breath through the body and the dynamic use of weight in each body part, characteristics of modern dance.

The Alice Reyes Modern Dance Concert was a collaboration with conceptual and avant-garde artists. The repertoire consisted of “Amada,” a dramatic modern-dance interpretation of Nick Joaquin’s “Summer Solstice” (now part of the BP repertoire).

Reyes also used classical music in modern-dance lingo and rock music with ballet, which was new in Manila in 1969.

Inspired by Reyes’ innovations, thespians such as Bernardo Benardo, Nonon Padilla and Soxy Topacio urged her to teach  a summer workshop. The program covered  a broad spectrum of dance, theater arts and workshops, and became the precursor of summer intensives now offered in most performing-arts schools.

Since CCP artistic director Lucrecia Kasilag was a family friend, Reyes requested the use of the CCP rehearsal hall, which has since been BP’s home base.

“From the start, Alice and Eddie [Elejar] made a five-year plan,” recalls  choreographer Edna Vida, Reyes’ younger sister. “Alice initiated the outreach program which is now part of CCP.”

From 1969 to 1989, Reyes amazed the public not only with her works but also with BP’s productions. Her dancers manifested the integrated visions of composers, designers and writers as well as the dancers’ personal inputs.

In 1972, Reyes collaborated with composer Nonong Pedero for “Tales of Manuvu,” a tribal story of  creation. It launched the career of Leah Navarro, who shared the stage with Anthony Castelo, Boy Camara and Celeste Legaspi.

Vida recounted that the company had grown accustomed to seeing the “audience in red,” a term which referred to the empty red upholstered theater seats, during their other modern-dance repertoire.

But the use of music reflecting the zeitgeist and the live singing from popular artists has since become a BP formula for an SRO show. It has made a seemingly arcane art form more comprehensible to the public.

Reyes also showed how the universal language of modern dance could express Filipino themes in such works as “At a Maranao Gathering,” “Dugso,” “Bungkos Suite,” “Rajah Sulayman,” “Bayanihan Revisited.”

As a strong-willed woman, she instilled her heroines with an independent spirit: the governor-general’s widow who avenges the assassination of her husband in “Itim Asu” (Onyx Wolf); and  Doña Lupeng and the female cultists who make men subservient  in “Amada.”

Her strength as a storyteller also came out in  “Carmen,” which was told in the viewpoint of Don José, the jilted lover.

Reyes’ musicality was brought to the fore in “Carmina Burana” and in “Company,” a fun piece set to Bach music, about dancers warming up in class and dressing onstage for a full production.

Because she seldom met the public’s conservative expectations about dance, Reyes was both criticized and cheered.  Her style was misunderstood in the beginning. Many remained apathetic to dance.

Recognition of  Reyes’  role as a driving force in the arts initially came from the cultural cognoscenti, theater professionals and musicians.

“Although we got negative reviews, there was an  intelligent audience who propped us up,” said Vida. “They formed our season-subscription base. Alice could feel our morale. We worked so hard until we got everything perfect. She told us not to fight back or get defensive. The best revenge is a good performance.”

Nonetheless, Reyes gave what the public wanted by introducing classical ballet in the repertoire and highlighting the classical training of her dancers.

“When I was a  dance scholar, Alice would always say, ‘Start small and start well.’  She never produced things which the company could not sustain,” said Vida.

As the company grew together with its supporters, BP included full-length ballets. Its biggest pride was now its versatility in modern dance and ballet, which today has become the norm in the dance world.

“Alice made us do ‘Nutcracker Act 2’ over and over until we finally shared the stage with guest artists like Natalia  Makarova and Yoko Morishita,” said Vida.

Every year, BP would invite foreign guest teachers and choreographers to level up the standards and stars of the ballet world to draw more crowds.

Reyes put her own ballet training to good use by creating her versions of  “Midsummer Night’s Dream,” “Romeo and Juliet” and “Cinderella.” She also restaged “Giselle” after Marius Petipa.

When Reyes’ company was renamed Ballet Philippines to make it a brand identity in foreign tours, she had the foresight to let the company go on without her.

Still, her contribution to the arts was noted by Felicitas Radaic, the proponent of the English-ballet style, from the Royal Academy of Dance. She  campaigned with Vida for Reyes’ conferment as National Artist.

But in the  past there were issues about Reyes’ American citizenship. (She has reacquired her Philippine citizenship and is now a dual citizen.)

Vida recalled that her older sister didn’t hanker for the honor and was content in having achieved her vision for establishing a professional company of a world-class level.

At 72, Reyes is into business. Her manufacturing and export company of home décor, Chrysara, not only gives jobs to thousands of Filipinos. As what she did to dance, this entrepreneur has also brought to the world’s attention the exquisite craftsmanship of the Filipino.