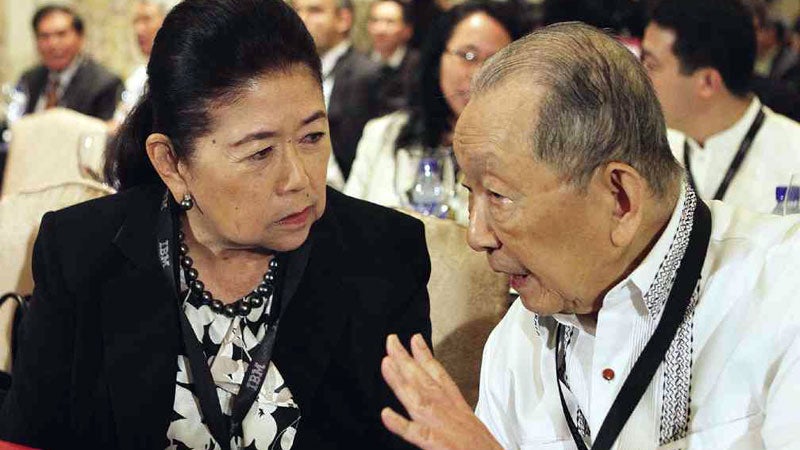 The man of many parts was a code-breaker in India for the US Army in World War II, a founder of SyCip, Gorres, Velayo (SGV), a cofounder of Asian Institute of Management and an official of dozens of top-ranked firms in the United States and Europe. But that’s just his daytime activity.

Certainly a man of many surprises as well, it turns out that his major concern for many years now has been what to do about what he calls “the bottom poor.” He feels strongly that their way out of that category is Education with a capital E.

Putting his money where his mouth is, he is the man behind Synergia, funding the nongovernment organization to enable its chief, Milwida Guevara, a former finance undersecretary, to work with over 300 towns to send children to school and find them computers, television sets and books to supplement their learning.

Driven by his education mantra, he hit on an equally strong partnership with Dr. Jaime Aristotle B. Alip, president and founder of San Pablo City-based Center for Agriculture and Rural Development Mutually Reinforcing Institutions (CARD MRI).

Formed in 1986, CARD MRI is “a leader in microfinance and community-based social development undertakings,” according to its charter, “serving poor women in 1,404 offices nationwide.”

SyCip’s firm, SGV & Co., had CARD MRI for a client and he himself was personally acquainted with Alip.

CARD MRI is fixated with “the bottom poor… especially in fishing villages where a large number of children have no chinelas (slippers) or shirts, and go hungry. They have no money for pencils, notebooks.”

SyCip first doled out P20 million for a pilot CARD MRI educational loan program that was tried out in the provinces of Masbate and Occidental Mindoro midyear in 2010.

With its success, midyear in 2011, the program was rolled out in “the poorest of the poor” areas where CARD MRI had offices.

SyCip roped in a friend, New York-based Paul Kazarian, to team up with him and put up a counterpart $1 million to his $1 million to roll out the educational fund at $100,000 a month.

Today, what started out as the Washington SyCip Family Foundation and the Kazarian-SyCip Foundation-funded Zero Dropout Program has sprouted new shoots.

A significant donor to the program is Radiowealth Finance Co., a consumer and retail lending company. Led by its president, Roberto Guevara, the firm has provided Zero Dropout with a P1-million grant, plus a

P30-million interest-free loan, payable in five years, to enable the program to support 50,000 more children, in addition to the 46,000 already on its roster.

CARD MRI members, all women—their loan return rate is from 96 to 100 percent; they are reliable borrowers—who have a small livelihood and support children in the elementary grades, may borrow from P1,500 to P3,000, payable in three to six months or a year at very small interest rates (1 percent per month on the diminishing balance).

Commenting on the almost 100-percent prompt repayment, SyCip says “the poor are often more honorable than the rich.”

Zero Dropout Program aims to provide the financially challenged parent a chance to give their children the gift of basic education.

“I ask my friends,” SyCip muses, “how they are helping on education for the poor. ‘Oh, I’m sending my driver’s (or my cook’s) children to school.’ They just don’t know how to reach the very bottom.”

Neither did he, at the outset.

“CARD has 1,400 offices all over rural areas in the Philippines in microfinance but they were not in education. I asked: ‘If I give the funds to you, can you go to education?’”

The tryout worked, and SyCip and his friend Kazarian released $100,000 a month from their joint $2-million kitty.

What guarantee do funders have that their money is going to the right beneficiaries?

SGV & Co., a member firm of Ernst & Young, carefully monitors end beneficiaries. Twice a year, 30 associates, who are younger members of the firm, are sent out to audit CARD MRI offices and their members, and to monitor the progress of their beneficiaries in the Zero Dropout Educational Scheme.

Since they are farmed out to poor areas, not a few young men and women, not ever having been exposed to such dire living conditions, get all choked up.

In their briefings before they are sent out, their chief, Christian G. Lauron, a partner in the firm assigned to financial services, government and public sector, and impact investing, warns them that they are going to face super-tough conditions.

They inspect the homes of the loan recipients (do they have TVs? living room sets? and so forth), then the beneficiaries at school, their teachers, then the CARD offices.

A number of SGV associates are moved to start up little help projects of their own: chinelas for the shoeless, food, books, clothing—every little bit helps.

But the big deal is education, which SyCip is convinced is the children’s way out of poverty.

Lauron wishes that corporations will start looking at “making impact investments—investing in outcomes that lead to meaningful change.” All these actions, he says, “continue to be grounded and targeted, but are part of a continuing strategic development and appreciation of our interconnectedness.”

SyCip, who has insisted all his life that “I’m only a bookkeeper,” muses: “Reality is pernicious. These folks don’t have daily money. They have to sell their harvest in advance.”

What brought on these SyCip ruminations was a poignant Inquirer editorial in March endorsing columnist Cielito Habito’s admiration for kids who “swim across raging rivers, walk for miles, make like trapeze artists on ropes strung between cliffs” to get to school. Habito also worried about their dropout rates.

Step up to the plate, folks: The CARD MRI’s e-mail address: [email protected]

On a separate note, SyCip’s erstwhile partner, Alfredo Velayo (the “V” in SGV), another great person, passed away barely two weeks ago.

When his buddy came to visit him as he lay ill, he managed to holler, “Hey, Wash, what the hell are you and I doing still alive?” or words to that effect.

Sometimes, the people who appear to be crazy, shepherding their friends to Club Mwah and such, are in reality those who seek to ease the pain of seeing how the other half lives—but also are doing something about it.

Who says 93 is old? Not Washington SyCip.

Washington Sycip, 90: How not to retire when you are retired