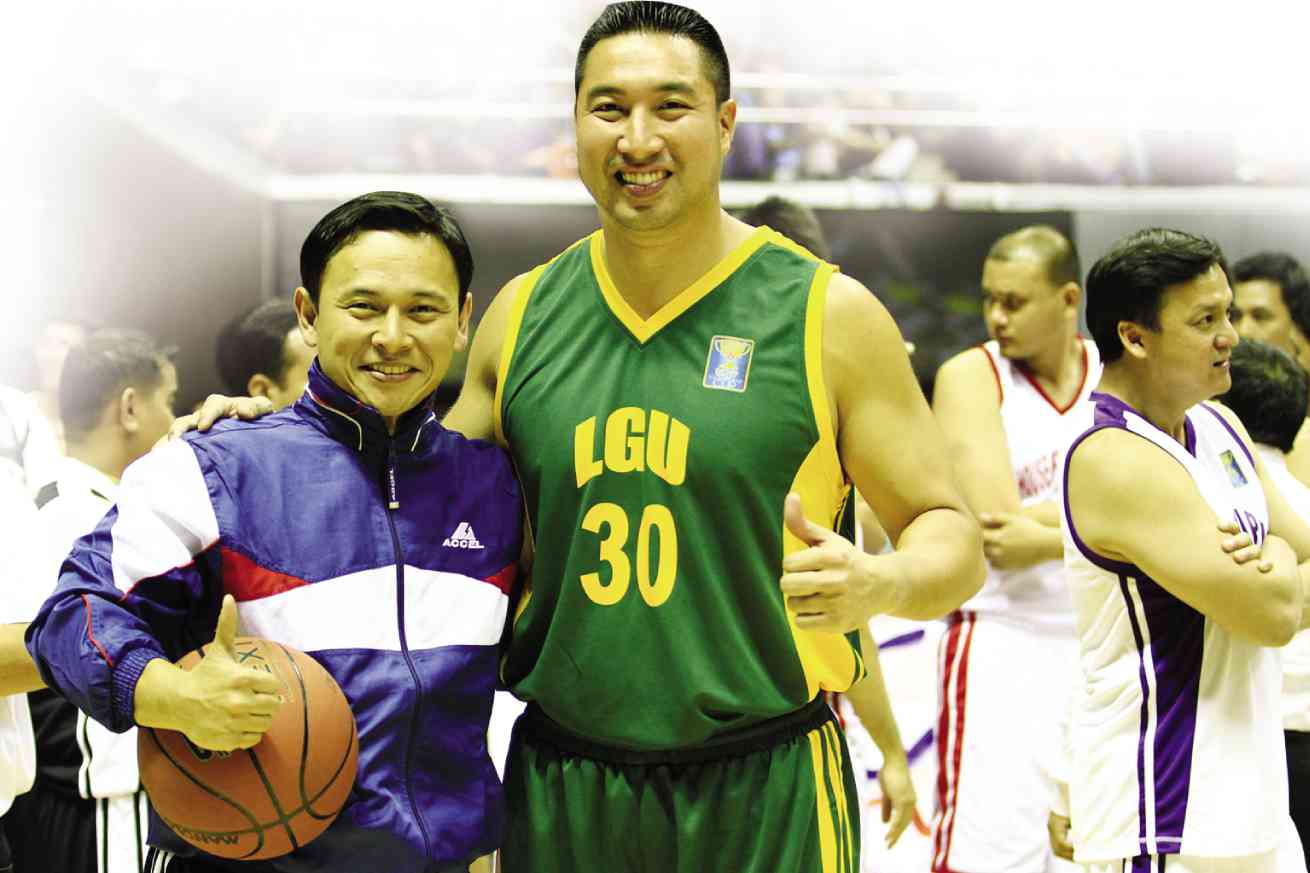 DESPITE their height disparity, San Juan Vice Mayor Francis Zamora looks up to Sen. Sonny Angara as a role model.

These politicos love their game

For San Juan Vice Mayor Francis Zamora and Sen. Juan Edgardo “Sonny” Angara, basketball has been a constant in their lives.

“Filipinos love it, aside from their wives,” Angara says in jest.

These politicians just wrapped up the second season of the UNTV Cup at the Ynares stadium. This charity league is composed of the different branches of government. Zamora leads Team LGU, while Angara is captain of the Senate team.

The P1-million cash prize is donated to the charity of the champion team.

A former basketball player, the 6’5” Zamora is easily the face of the UNTV Cup. He has been playing since childhood. He was captain of De La Salle University when it won the UAAP championships in 1998 and ’99.

Zamora’s biggest break was playing for the Blu Detergent Montana team in the PBL under an inspiring coach, Leandro Isaac. At that time, he was scoring in double digits in hoop points and rebounds.

One day, coach Ryan Gregorio of Purefoods asked if Zamora had an escape clause in his contract. Although it was his chance to fulfill his dream of joining the PBA, he felt he owed his career to Isaac and declined Purefoods’ offer. Ironically, Isaac was replaced by another coach.

“With a new coach and a new system, it wasn’t the same. I called Ryan, but they got another player. I guess it wasn’t in my destiny,” recounts Zamora. He fulfilled his contract and played another conference under ICTSI, owned by billionaire Enrique Razon, a De La Salle alumnus.

Zamora then took up a master’s degree in Entrepreneurship and Public Administration at New York University in 2003. Following the footsteps of his father, former San Juan Rep. Ronaldo Zamora, he entered public service.

Seeing how basketball taught him to be physically and mentally disciplined, the younger Zamora has made the sport an advocacy. As vice chair of the City Drug Abuse Council, he and his team visit schools and barangays to encourage the youth to indulge in sports instead of drugs. He conceived  the slogan “Ako ay San Juaneño, Ayaw Ko sa Droga (I am a San Juaneño, I hate drugs.)”

“As a former player, you speak from the heart in encouraging people to engage in sports. This will keep them away from vices. When we were playing in college, others would go out drinking and doing drugs. Being an athlete, you have to say no because these affect your condition,” he says. Even today, Zamora practices restraint and gets up early to work out.

After cutting down his carbohydrate intake, Zamora lost 15 lbs. Basketball and weight training help him cope with the stress of work in the LGU (local government unit).

On the court, Zamora still maintains his double-digit scores.

Aside from forming teams and holding tournaments in barangays and public schools, Zamora also organizes basketball clinics, conducted by his athlete friends.

“When a PBA player teaches how to dribble and shoot, this creates an impact on a 10-year-old,” he says.

Zamora observes that many PBA players had humble beginnings. “By giving a chance to someone in a public school, you can develop a player from the grassroots,” he says.

Like Zamora, Angara has been playing basketball since grade school and even joined the varsity team despite his 5’8” height. He revived his interest when he became a congressman and played in tournaments in his home province, Aurora. The UNTV Cup has been his most challenging.

“The Senate team is the oldest, most of us are over 45 years old,” says Angara. They are up against the PNP and AFP teams, who are younger and play all year-round.

“I’m a decent passer. I shoot from the outside,” he says.

As the point guard, Angara made news when he threw in a dramatic shot way across the court. The announcer compared the shot to one by LeBron James. “I got the ball and made the shot that was unexpected. Suntok sa buwan,” he says.

Angara is also busy with the Senate’s mini Olympics, with the basketball games held at the GSIS gym.

On the advantages of including basketball in his lifestyle, Angara explains: “The public sees you as more human and multidimensional. If you’re into sports, there is less probability of getting into vices. Those who aren’t inclined to sports tend to fool around more. Sports imparts values that are often taken for granted, such as discipline, commitment and teamwork.

“I read that in ancient Greece, the Olympics preceded democracy by a few decades. They may seem unrelated, but in sports, everybody  wants fairness and adherence to rules. Same in a democracy: You want equal opportunity. In sports, even the lowly person can beat the royals who got their status by divine right. Today, when the driver beats the boss, you realize that everybody is equal. That is a powerful idea.

“Sports is crucial in a country like the Philippines that is still in the process of nation building,” Angara says. “Anything that helps build our identity, like culture, history and sports, brings us together in the face of different languages and dialogues that have ripped us apart.”