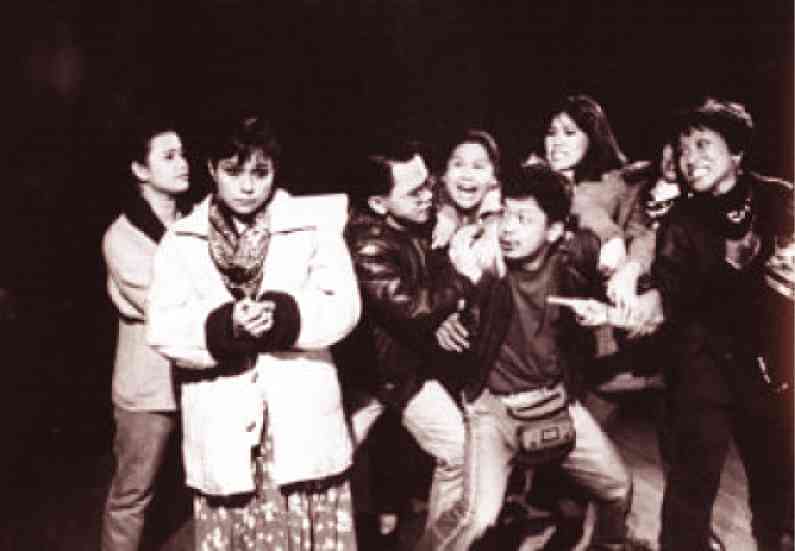 Nora Aunor on stage–where she was just as stellar

There is no way you can quantify the film credentials of Nora Aunor. She has won acting awards in cinema here and abroad, and the number just keeps growing.

Almost always, her presence in any film is an invitation to another acting award. But unknown to many, Nora has also done theater, and, while modest compared to her film output, these appearances have been equally memorable.

While the best actress trophy eluded Nora, everyone in the cinema world was convinced her role as Corazon de la Cruz, whose brother was killed in an American military reservation, was second to none that year.

Manunuri member Nicanor Tiongson wrote: “Once again, Nora Aunor proves herself to be one of the finest actresses today, with an acting style that is both ‘raw’ and ‘fine,’ characterized by a disarming sincerity and force that can break into an unbelievable number of nuances, shades, and colors of emotion. Outstanding is her court scene where her face registers a gamut of emotions—from anger to confusion to depression and despair—in the space of about 10 seconds. Like a mature actress, she does not attack dramatic scenes with histrionics or hysteria. Over her brother’s coffin, she curses the Americans who came to pay off her family by screaming, ‘My brother is not a pig’ over and over again with mounting intensity.”

In 1991, 15 years after the critical success of the Kashiwahara film, a stage adaptation of “Minsa’y Isang Gamu-Gamo” was conceived by the Philippine Educational Theater Association, with award-winning writer Rodolfo Vera tapped to write the script and Soxy Topacio as director.

Aunor debuted as stage actress at the Raha Sulayman Theater in Fort Santiago.

Vera recalled that “Minsa’y Isang Gamu-gamo” was chosen by Peta as part of its season in response to the anti-US bases issue, which was the burning issue at that time, with the Senate about to vote on the fate of the RP-US bases treaty.

“Peta talked to Marina Feleo-Gonzales, the scriptwriter of the film, and delegated me to adapt it for the stage,” he said.

“The play was quite faithful to the film script. All I really had to do was to restructure it a bit so that the scenes could play out longer and minimize the numerous cuts that film can afford. Also, I remember asking Marina how she imagined Corazon (Nora’s character) at the present time. She said she would see her as a committed member of the anti-US bases movement. So I added a few scenes that would help set that up in the end. Other than those tweaks, if you watch the film, much of the memorable lines and scenes, about 70 percent of them, were there on stage.”

From the beginning, the play was conceived with Aunor in mind. It was Topacio and other members of Peta who convinced the actress to try theater. If Aunor had said no, they were ready to mount the play on a lesser scale.

Since this would be her stage debut, “It gave her much anxiety at the beginning,” recalled Vera.

“And in the process, she created her own ‘ritual’ so to speak. Because she realized that theater required her to memorize all her lines in one go (unlike in film where you needed to memorize the lines of any particular sequence being shot), she developed the habit of writing (on a notebook) all her lines—that was her method of memorizing them.

“She also remarked during one rehearsal that, now, she understood the story and its details a lot better than when they were shooting the film. She said she lost track of the real flow of the story since they were not shooting the film chronologically. But in theater, she would have to perform it from beginning to end. So she learned how to let her emotional track organically develop and grow towards the climax.”

‘Hugeness of a giant’

Opening night brought out the best in Aunor, said Vera.

“‘Minsa’y Isang Gamu-gamo’ was one of Peta’s greatest hits. Imagine Nora, live, on stage, reprising her role as the nurse who wanted to go to America. The movie was one of the best films that ever screened at the Metro Manila Film Festival (along with ‘Insiang,’ ‘Ganito Kami Noon, Paano Kayo Ngayon’—one of those films that defined the ‘second golden age of Philippine cinema’ back in 1976). And seeing Nora on stage, no matter how small her physical stature was—she exuded the hugeness of a giant. All eyes were focused on her whenever she was on stage. Your eyes just searched for her in crowd scenes— and you’d find her, because she evoked a bigness that few actors could ever display.

“Also, there were times when she would be alone on center stage. Imagine Raha Sulayman Theater, which was a bit of an acoustic challenge for the actor (open-air, with sounds coming from the Pasig River behind the rampart)—and here was Nora, diminutive as she is, but even in her silence and pauses drawing the attention of the audience who, with bated breath, waited for what she would be saying. That for me was pure theater. Walang mikes, walang effects, walang closeup—just pure contact. No matter how far you were from the stage, all vantage points led to her. Grabe.”

Amadís Ma. Guerrero had the same impression: “The depth, fire and intensity are there, and she receives solid support from an excellent ensemble. The impact of this play is considerable.”

The late movie writer Billy Balbastro, meanwhile, declared that “Theater won’t be the same again after the entrance of Nora Aunor to the scene.”

After “Gamu-Gamo” came the play “DH” (Domestic Helper”), written by Ricky Lee. “DH” had a good Manila reception in 1992 and, as a result, it toured the United States and a few other countries.

“In this play, she played a number of roles (all domestic helpers), and in each she was brilliant,” said Vera. “Her performance was just as riveting as the first time in ‘Gamu-Gamo.’ This play, I think, was more challenging for her kasi she had longer lines, a lot more monologues and four roles to tackle! She was funny, tragic, broken and transcendent.”

Inquirer columnist Conrad de Quiros was moved to write of her performance thus: “Nora proves here that she’s easily one of the finest actresses in the land today. Among those currently straddling film and stage, she probably has no peer. This is a tour de force. In the role of four women, Nora takes us through a roller-coaster ride along despair and salvation, glory and shame. The role is physically and emotionally draining, and can be taken on only by someone who’s done strenuous exercises in both… But what maturity Nora has developed! They don’t give awards for plays in this country, so Nora won’t get a Famas for this one. But she will have all the awards she needs in the warmth she gives to the lonely, the balm she gives to the wounded, and the hope she gives to the grieving. There is one thing greater than being a superstar, or even a megastar. And that is being, in the truest sense of the word, the people’s star.”

Ma. Ceres Doyo noted that Aunor seemed like to the theater born, even if she was surrounded by Peta veteran such as Carme Sanchez, Liza and Bing Magtoto, Ditchay Roxas and many others: “Nora is the bida in all the sub-stories, and she manages to shift from one country situation to another. Noemi in Cairo stabbing to death her employers and getting stuck with their carcasses in that prison of a house; Fe running away in Hong Kong and becoming an ‘AB’ (akyat barko); Dolor becoming a mater dolorosa in Barcelona; Nora is also Loida in Italy where the maids’ ‘fund-raising play’ is being mounted. It is Citizen of the World Loida who brings to life the different DH characters and, sadly, at the end, it is she who breaks apart.”

Aunor’s last theater outing was in a production of the classic Greek play “Trojan Women” in 1994, directed by Peta founder Cecile Guidote Alvarez.

Alvarez said Aunor performed for free in this production, and her superb acting made a hardcore Noranian out of her.

Vera is positive that Aunor can still make a theater comeback.

“I understand she has a problem with her voice right now,” he said. “That could be a problem for theater, even with the technology we have. But as for her acting prowess, I have no doubt she will still be great on stage. In film, her subtle expressions already speak volumes. But on stage, from 20 feet away, she can still draw you in. That’s how powerful she can be.”