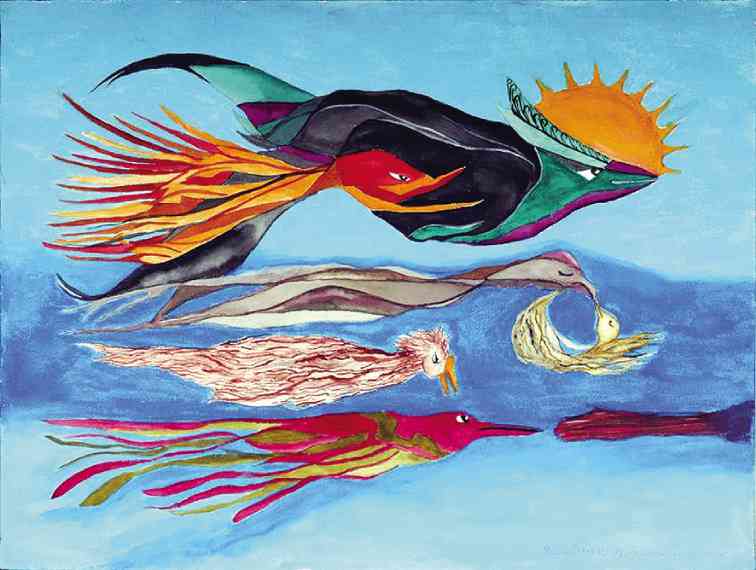 The Tabon Cave on the west coast of Palawan was named after the tabon bird, which deposited thick layers of guano during periods when the cave was uninhabited. Thus was produced a cement-like floor of bird dung that could be used by early man.

It was in Tabon Cave, in 1962, that Dr. Robert B. Fox, an American anthropologist of the National Museum, found fossilized bones—fragments of the skull and jawbone of three individuals.  They became collectively known as the Tabon Man (although some of them could have been parts of women).

The place where they were found seemed to have been a Stone Age factory of tools.  Retrieved were 3,000 specimens of discarded cores of a material that had been transported from some distance.

The shape of the coffins of many ancient Filipinos is that of a boat, even if they were put on rock ledges in caves. Most corpses then were not buried. The body was placed in a boat and sent adrift on a river or the sea to find its way to the other world.

The famous Manunggul jar, dated 200 BC (now in the National Museum), was found in the Manunggul cave in Palawan. Its cover shows a boat with two figures on it—the dead man (indicated by the strap supporting his chin) and a boatman (the Lord of the Dead) ferrying him across. (With their flat faces and hollowed-out eyes, if they weren’t so ancient we’d say they were ETs.)

The Panay belief is that all streams join a mainstream, which is a kind of thoroughfare for souls. It ends up in Mt. Kanlaon in Negros, which is supposed to be the center of the universe—Alicia Magos.

In another region, it is believed that at the moment of death, one’s soul exits either through the fontanel (bumbunan), now hardened, or through the big toe. The soul jumps into the nearest body of water and eventually joins the mainstream.

From ‘arnis’ to hula hoop

As for Filipino exercise, it has gone a long way from arnis, bati-cobra and sipa to badminton and hula hoop. Bati cobra is a lot like baseball, only it uses, instead of a ball, a stick or a piece of bamboo. Sipa is a traditional native sport predating the Spanish times. The ball used is of woven rattan strips with symmetrical holes. Two teams kick the ball back and forth over a net which divides a space the size of a tennis court.

When I was in grade school we also played sipa. The child’s version of sipa was a lead washer with thin strips of colored papel de japon inserted into the hole.  It was like a colorful fountain. Points were scored depending on the number of kicks one can make without the ball going “dead” or falling to the ground. Girls liked to kick with the outer side of their foot, the boys with the inner side.

“Tao po!” does not mean “Is anyone home?” In the rural areas then, one never knew if the knocking or scratching at the door was caused by a goat, a pig or a dog.  So instead of knocking, visitors called out “Tao po!” meaning “It’s a person!”

Tattoos among Filipinos were not just in Bilibid prison, but among our ethnic tribes. Some of the famous tattoo art from the 1930s shows the Kalinga warriors with designs etched over each breast.

Tribal women, too, had tattoo designs on their upper torso, so close together that you could not see a clear piece of skin. Since women of the Cordillera went about topless, maybe it functioned as a blouse later when they were Christianized.

As time went on, tattoos became simply decorative, and many young people now sport them. (By the way, you are not allowed to donate blood if you have a tattoo).  Two of the workers (brothers) of my architect daughter are tattooed all over their arms and necks. They are great workers, but Wendy always has such a hard time trying to get them into whatever construction site she’s working on. They are demanded police clearances and various other IDs.

For my art exhibit I want a tattoo on my left arm, but only drawn with temporary dye. It will read:  If lost please return to (my address) with one red rose on one end and a gumamela on the other.

Why some people preferred to cook rice in bamboo tubes rather than clay pots: a folk story has it that a stupid wife once put her pot on three turtles. They walked away and almost frightened her to death.

The Ayala Museum has a permanent exhibit of the exquisite thin gold jewelry the ancient Filipinos used to cover all the orifices of their dead—eyes, nose, mouth, ears and private parts. Recorded in the Boxer Codex was how gold jewelry was the favorite of both women and men—pendants, bracelets, gold rings, earrings, leglets.

Gold was pretty common then, panned from rivers and mines. Cavities in teeth were plugged with gold, and some holes were sometimes purposely punched on healthy teeth so they could be decorated. As late as my own childhood in the ’30s, maids had teeth capped with gold, a heart cut out of it to show the white enamel of the tooth. It was fashionable to flash a lot of gold teeth.

An earlier source has it that some tribes blackened their teeth “because only wild animals have white teeth.”

Love song before the coming of the Spaniards:

A verse dug up by Dr. Arsenio Manuel:

A fragment of a 2007 OPM, “Kundiman” by Silent Sanctuary, a Filipino band: