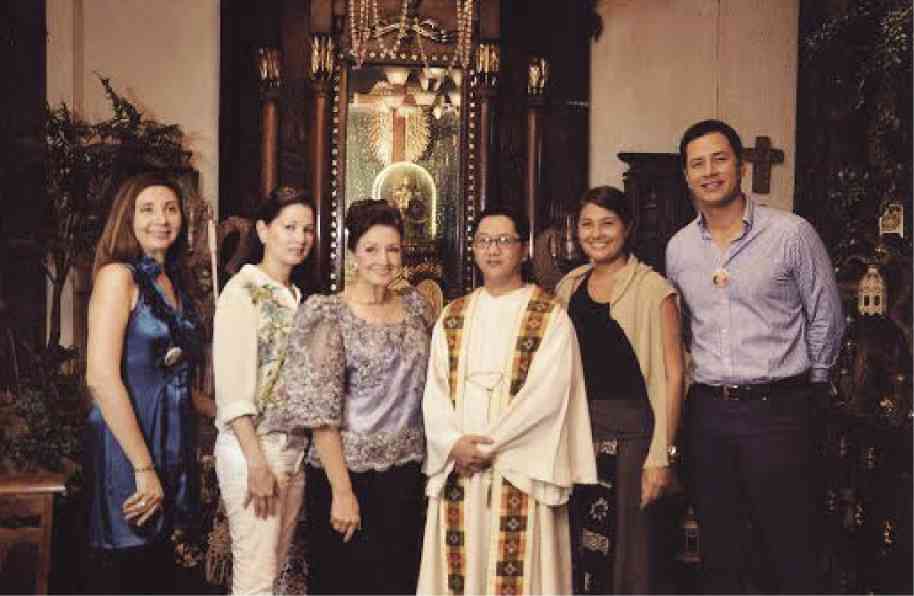 Ingrid Sala Santamaria breezed into town on June 18, and checked in at the Marco Polo Plaza Hotel. Next day at 10 a.m. she held court at the hotel’s lobby lounge with friends from the Cebu media.

Ingrid told the local media about her latest project: the professional recordings of six Romantic-era concertos with her as piano soloist with the Manila Symphony Orchestra (MSO) under the baton of professor Arturo Molina.

The concertos are in a three-CD package which was launched in Manila on June 12 at the Heart of Tondo. The occasion served to unveil a plaque dedicating the venue as the Santamaria Concert Salon.

The event started with a Holy Mass officiated by Fr. Romel Cruz, followed by a program at which professor Jeffrey Solares gave the rationale on how the CDs were produced. Jeffrey is the executive director of the MSO and headed the recordings’ editing team.

He is also well remembered in Cebu for his being the music director of the Cebu Youth Symphony Orchestra and the Peace Philharmonic projects of the Salvador and Pilar Sala Foundation’s 10-year musical development program.

The marker was unveiled by Dachelyn Yap Badoy, representing Ludovico Badoy of the National Historical Institute of the Philippines. Assisting was Michel Villar, cultural attaché of the French Embassy.

On the occasion Ingrid performed two of the concertos contained in the three-CD package: Concerto No. 2 by Rachmaninoff, and Concerto No. 1 by Tschaikovsky. An ensemble from the MSO accompanied.

We were all ears, and eyes, as Ingrid showed a video of the event and shared more good news with Virginia Davide, Flor Ynclino, Cookie Newman, Honey Loop and Chinggay Utzurrum.

Due appreciation was given to the coffee and tea served, along with those delicious ensaimada the Marco Polo produces, platefuls of cookies and tempting wedges of blueberry cheesecake.

Just then hotel general manager Hans Hauri, dapper in a royal blue suit, made his appearance after a whole morning with the Cebu Tourism Forum. Anything more?, he asked.

Apropos, the subject on hand was the suggestion of Virginia Davide that efforts be made to nominate Ingrid as a National Artist of the Philippines. “Yes, yes, yes,” all chorused.

Ingrid further announced that the three-CD package will be formally presented to the public on July 25 at the Ayala Museum in Makati City. On this occasion she will perform with the MSO conducted by Arturo.

In the program are the Tschaikovsky and Schumann concertos. Earlier, last March 20, at the same venue and also with the MSO and Arturo, Ingrid performed the Grieg Concerto No. 1 and the Rachmaninoff Concerto No. 2.

Speaking of the Ayala Museum in Makati, an important exposition opens there on June 30 at 6 p.m., titled “Journey into Space—A Visual Odyssey of Fernando Zobel.” It is at the third floor gallery where it will remain on view until Oct. 5.

The exhibit consists of masterful abstract works by Fernando in the years shortly before his death in 1984. An earlier exhibit done some time ago concentrated on his first period, consisting of figurative paintings done in the Philippines.

The abstract works by Fernando in this exhibit have been sourced in the Philippines from private collectors, family members, as well as from the Ayala Foundation and the Ayala Museum itself.

Fernando left a valuable legacy in Spain. In the city of Cuenca, famous for its handing houses, in one of them he established the “Museo de Arte Abstracto de Cuenca.” his works are exhibited there along with those of numerous Spanish abstract painters.

Fernando has been duly recognized in Spain, with a recent commemorative stamp about Cuenca museum, and the naming  the AVE (high speed) train station at Cuenca in his honor.