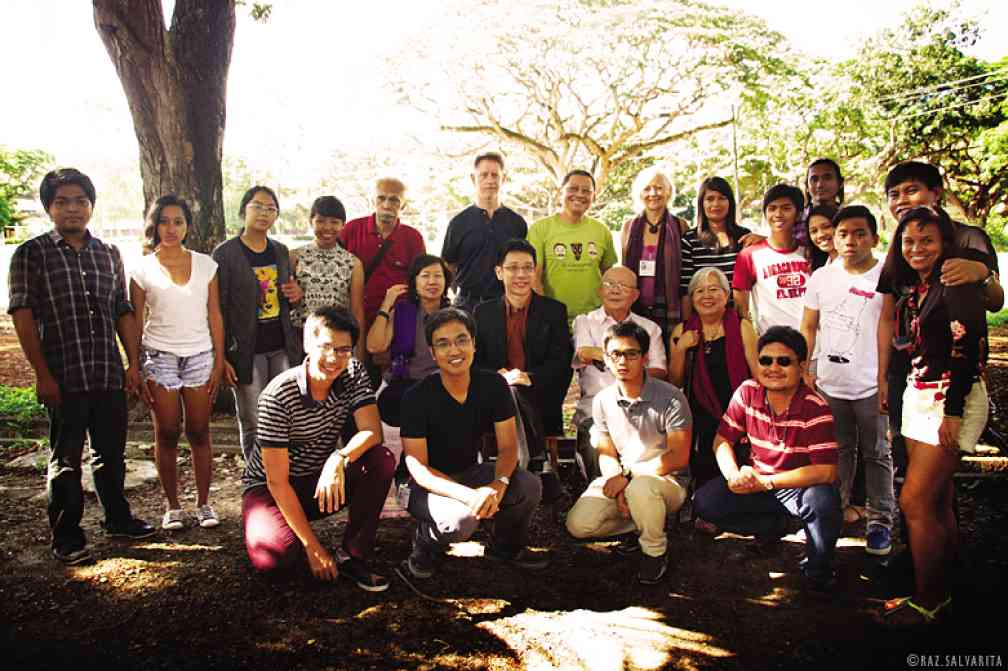 The first thing I did when I got home from my three-week trip to Dumaguete, where I was one of 15 fellows to the 53rd Silliman University National Writers Workshop, was create a playlist

Way before mp3 players came about, I indexed my life experiences with songs. It was like producing a soundtrack for my memories.

“All your life, you were only waiting for this moment to arise.”—from “Blackbird” by The Beatles, 1968

On the night we arrived at the Writer’s Village, the fellows gathered around a lopsided monobloc table for Disclosure, a game where we gave trivia about ourselves, with the one revealing himself taking a shot of alcohol. It was a great ice-breaker.

“Mae! I expected you to be African-American. You looked like one in your black-and-white photo,” said Renz Torres, the 19-year-old fellow for Fiction from Silliman whom I instantly liked. He was our bunso.

“I thought so, too!” Dani Olivan agreed.

He was our batch’s Crush ng Bayan, a fellow for Poetry from Ateneo de Manila.

Well, that was a first. These guys weren’t even intoxicated when they saw my picture! Seeing how candid they were, I knew I was in good company for the next three weeks.

Later that evening, someone brought out a guitar. “Blackbird” was played. It was a runaway hit, the apt first song for my soundtrack.

“We are the champions, my friends, and we’ll keep on fighting ’till the end.”—from “We Are the Champions” by Queen, 1977

Coming home two nights later from an art exhibit opening in Silliman, our group of fellows engaged in a singing battle of sorts, while riding the bus on our way home. The designated Night Watchers of that week, Silvin and Jaizer, joined in.

This was our last song before getting off the bus. The song captured how we felt about being selected for the workshop.

Even if we felt like champions, I still had mixed feelings about the experience of getting my work discussed during the first week. I slunk away to my cottage the night before to get a full night’s rest to prepare myself for the comments on my work.

I recorded the session when my piece was discussed. I still have not listened to the recording since. I don’t know how to prepare myself to hear the comments a second time.

The first week was a great way to break into the world of literary criticism. That evening, I told my plenary seatmate Jake Rivera, a fellow for Creative Nonfiction from UP Diliman, that not only did the workshop help me understand what makes a writer better; it also helped me become a more critical reader.

“I’m bulletproof, nothing to lose, fire away, fire away…”— from “Titanium” by David Guetta featuring Sia, 2011

The manuscript for the second week was not as thick as the first, but this week felt longer. I learned more because none of my works were up for discussion. I was not distracted.

“Titanium” was my secret soundtrack for the second week because during this time, everyone’s pieces were already discussed. Mercilessly.

I had my best experience of poetry reading on the second week. I was stunned by the abundance of talent from Silliman.

There was a local rapper who brought the house down; another home-grown band whose playlist kept the crowd alive; and, of course, an audience that listened.

“We could all learn from the Dumaguete scene,” Jason Chancoco mused.

He was a fellow for Poetry from Naga. Together with Rolly Jude Ortega, a fellow for Fiction and a graduate teaching fellow in Silliman, we trekked to the famed Rizal Boulevard for a nightcap of tempura and balut.

Lunch ended early on our last day in the village, so we sat in the session hall as we waited for the afternoon plenary to begin.

Someone started humming “Moon River,” and someone else joined in. Before we knew it, both fellows and panelists were humming together. No one orchestrated it or directed it. The voices blended. It was beautiful.

“Goosebumps!” Greysh Tubera mouthed to me from across the room.

She was a Creative Nonfiction fellow from Davao, who mesmerized us with her narratives culled from her experiences as a nurse.

I nodded back because I had them, too. I looked at Jonggai Lim, another Creative Nonfiction fellow from Cebu. She was rubbing her arms down.

The same scene played again when we were on our last out-session in the breathtaking Antulang Beach Resort. This day also happened to be my birthday, and, just like my previous birthdays, God managed to make it unnecessarily memorable.

We were waiting for the rest of the fellows and panelists to board the yacht for our mid-afternoon cruise at Tambobo bay. Someone started humming “Moon River” again, and the rest followed.

I looked across at Elle Divine, our Australian co-fellow for Creative Nonfiction. The humming in the background gave her countenance more peace.

Just like these humming outbursts of “Moon River,” our batch seemed to just happen. Our connections with one another fell in the right places, and everyone around us noticed it.

“And now whatever way our stories end, I know you have re-written mine by being my friend.”—From “For Good,” from the musical “Wicked,” by Stephen Shwartz, 2003

During the closing dinner, we agreed to sing for our presentation. Reno Evangelista, a fellow for Fiction from De La Salle University, supported the idea that we sang “For Good” from the musical “Wicked.” The group liked the song’s message and we sang it “with feels” that night.

Now, every time I listen to it, I hear our fellow for Poetry from Dumaguete, Arkay Timonera saying, “Ang sakit!”

Though I agree with Arkay that parting with our co-fellows hurt, we have more beautiful workshop memories to carry us through our writing lifetime.