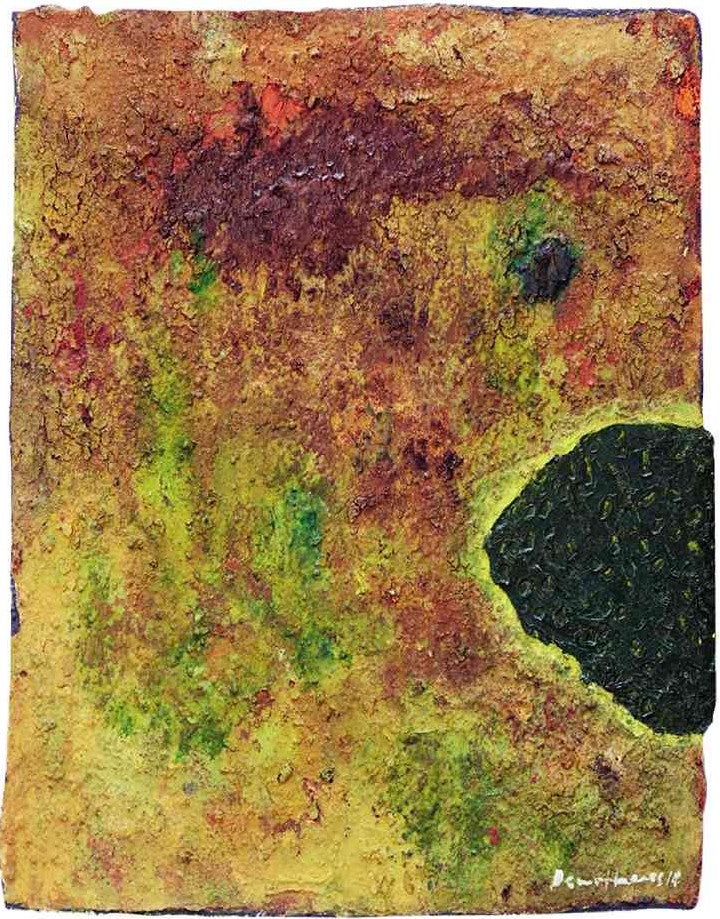 “There are no rules. That is how art is born, how breakthroughs happen. Go against the rules or ignore the rules. That is what invention is about.” Those fearless words were said by the late artist Helen Frankenthaler, who herself found her own breakthrough by pursuing the technique of Jackson Pollock, thus heralding Color Field Painting, subsequently influencing the direction of the works of other important artists such as Morris Louis and Jules Olitski.

Amazing that Filipino artist Demosthenes Campos should echo similar words, share the same sentiment as Frankenthaler’s, when he wrote in his artist’s statement: “I have no rules. I believe in the principle of styleless-ness.” In his current solo show at the Crucible Gallery titled “Substance,” Campos continues his exploration of nontraditional painting materials, exulting in the expressiveness of their very substance, as the show’s title implies.

Moreover, the artist attends to existential concerns, facing head-on, the social and spiritual plagues of the city of our affection that is Metro Manila. The wonder of these works is the way non-referential imagery, such as it is, can irradiate our emotion and attitude, decrying our indifference to the degeneration of our lives. Indeed, we ourselves have become the very predators that devour our young, devastate their lives, and frustrate their dreams of a better future.

In their ambiguous forms and dark chromatics, the works conjure, by turns, highly suggestive images, as of amorphous and indistinct shapes struggling toward definition, and summon the viewer’s curious fascination and, consequently,  inexplicable recoil.

Such a work, for instance, is “Dengue Water,” an allusion to the fetid water that breeds the mosquitoes carrying the dreaded virus. Its coloration is a sickly algae-green, referencing the clinging moss engendered by stagnant water. The regenerative green that we associate with nature has been leached out, leaving us with a pond of water harkening death.

In a witty verbal play, a work titled “Dense Cities,” Campos laments the overpopulation that has overtaken our cities, indeed, of the world. A choking multitude of people have been reduced to robotic slaves of capitalism and materialism. Humanity has become mere cog to the machine of a senseless existence. In repeated patterns of applied red pigments, Campos depicts each individual imploding within his constricting space.

The dire consequences of urban degradation are manifested in a couple of works, “Pedestrian Killer” and “Shanty.” The first can be interpreted as a hit-and-run victim – admittedly a most unusual subject—whose fallen figure has been marked off, while the second is a nightmare landscape of squatter shacks, ramshackle dwellings that the impoverished among us have cobbled together as a frail shelter over their heads. Spawned by the destruction of Manila during the war, the shanties have sprouted unabated, through the decades, a cancerous symptom of poverty which a succession of corrupt governments could not stem.

A wall of bleak pitch black confronts the viewer in “Soil Pipe Interference,” a gritty slathering of an asphalt-like material, luxuriating in its pervasively sinister effect. Bisected by a crack of light, it suggests the entrance to Hades even as the hapless viewer imagines himself plunged into impenetrable darkness, relieved only by the scattered gleams of a flame-like orange.

The largest work is “Urban Decay,” a sprawling work that has been subjected by the artist to every manner of “mistreatment,” distressed and bruised by a kind of rough handling of material. Thick with texture, roiling around with Twombly-inspired circular gestures, dripping with smeared paint from a pigment-soaked brush, the black and red trails are arrested as if in twisted combat. The arena, as it were, is a spread of tattered canvas, like a large discarded rag, untrimmed at the edges, defiantly keeping its dignity. The allusion to our city’s spinning descent into decay and degeneration is spectacularly upheld.

To be sure, the most mystifying work in the show is “Toxic Jungle.” The title adverts to the city’s noxious fumes and effluvia. The material and imagery confirm that even a downtrodden and despised material—as compared with expensive oils and acrylics—connect us with untapped emotional centers, touch a sensitive nerve.

The stillness of the work is deceptive, drawing us into a region of interpretation where a possibly offending material demands to be accepted as a metaphor.

That is precisely the moment when a substance becomes spirit.  Through these works,  Campos has demonstrated that the power of art does not emanate from the preciousness of materials but from their sensitivity and expressiveness.