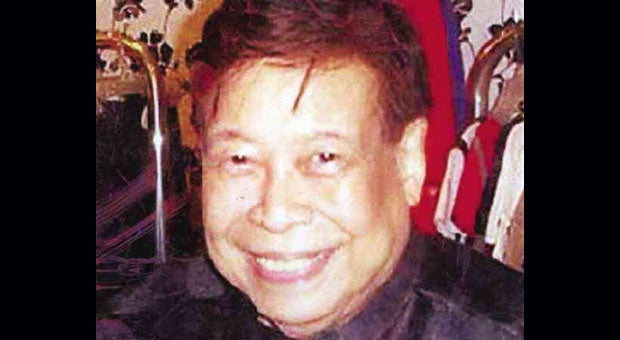 MANILA, Philippines–Philippine fashion stalwart Aureo R. Alonzo died Monday morning of hypovolemic shock due to gastrointestinal bleeding at Makati Medical Center. He would have been 86 on July 19.

On the heels of the reign of National Artist Ramon Valera, Alonzo, Jose “Pitoy” Moreno and Ben Farrales formed the triumvirate that ruled and defined Philippine fashion in the ’60s and a good part of the ’70s.

Not only did they corner the Philippine high society of those glamorous eras when balls were staged regularly, they also reaped accolades abroad, where they presented their collections before a prestigious mix of royalty, heads of state and the jet set.

Alonzo’s highest recognition was the Camel Award given in Europe in the ’60s. It was said that he showed the judges how he could cut, construct and sew right before their eyes.

Like his generation of couturiers, Alonzo knew and did the basics of clothes construction. He did not draw design, he made clothes.

The fashion triumvirate brought to the global stage the Filipino’s artistry in draping, exquisite beadwork, embroidery and ornamentation.

Like the early breed of couturiers before them, they mastered the terno. This was in the late ’50s and in the ’60s, when the country’s upper-crust women were a captive market, foremost of them a beauty who would be first lady, Imelda Marcos.

Alonzo had his share of loyal clientele, led by another beauty, the statuesque Gretchen Oppen Cojuangco, the wife of tycoon Danding Cojuangco.

They frequented his atelier/residence in Malate in Manila, a two-story ornate structure.

Although he came from a prominent clan in Navotas City—Roldan, his maternal side—it is well known that he did not finish school. This made his stellar career all the more impressive. He reached the pinnacle of his profession by sheer talent, hard work and character. He was well loved by people.

In recent years, he suffered from a blood-related ailment, according to his longtime assistant Eric Santos.

He spent his last years in a nursing home run by religious nuns, where he continued to accept a few clientele. According to Santos, his last work, done recently, was a red draped long dress (or gown) to be worn to a wedding.