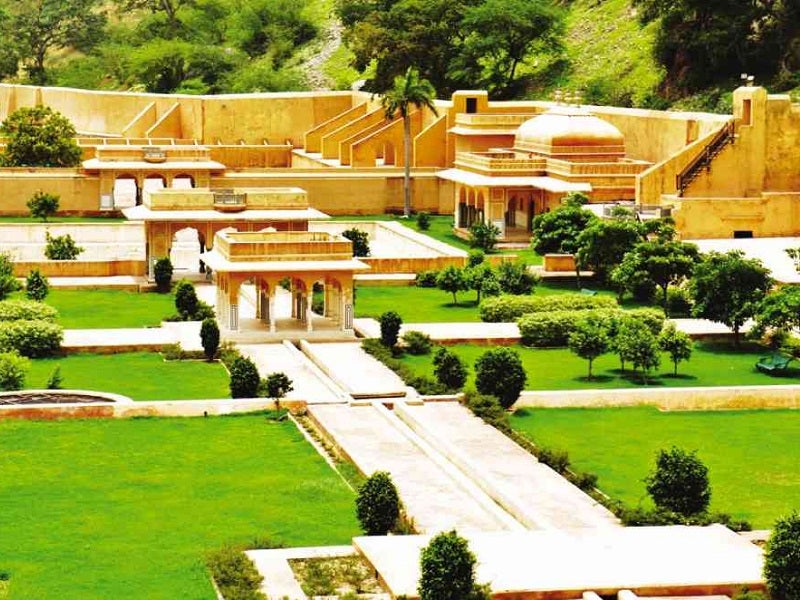 Exploring the ancient gardens of Jaipur Far from the proverbial madding crowd—tourist traps in Jaipur, the capital city of Rajashtan state—the City Palace, Amber Palace and Jaigarh Forts, the touts and hassles that wait by the temple entrances, by the side streets of Hawa Mahal and the rows upon rows of ancient shops inside the Wall City—are the sprawling hidden gardens of Jaipur, serene and tranquil in their beauty.

Any wanderlust will find much solace in the well-maintained lawns, lush greenery and sheer quietude the gardens offer the weary tourist at the end of a long, scorching day.

It is a great comfort, too, that during each day of my tour, I am given a snack pack by my most gracious host, Kamini Mathur, a documentary filmmaker, that consists of fresh lychees or jamun—fruits in season at the time of my visit, matri and pakora, homemade biscuits that I dip in cream cheese, laddu, sweets rolled into a ball from her hometown of Merit in Uttar Pradesh, and liters upon liters of water (a must).

Never mind if, bereft of snob appeal, the entrance fee to these gardens is only 10 or 20 Indian rupees, or even free. Never mind if these gardens are miles away from the center of Jaipur. Never mind, too, if most of the time, as a solo traveler I am alone in the gardens, as there are more gardeners and palace keepers than there are tourists. My free spirit has made me explore places most tourists in Volvo buses and air-conditioned tourist coasters have failed to see.

Among the facts I learned in the two weeks I stayed in the Golden Triangle of India (the other cities being New Delhi and Agra) is that most palaces, grandiose or modest, have gargantuan and expansive public squares and courtyards for festivals and gatherings, like the one in City Palace Jaipur—or both, like the one in Amber Palace and Fort, fronting Ganesh Pol. This in spite of the fact that Rajashtan, being in the north of India, is largely a desert and water is scarce.

About eight miles east of Jaipur in Agra Road going to Bharatpur Jaipur, is Sisodia Rani Garden. Though emblematic of the ravages and patina of time, it is still worth visiting. But it is precisely this very same ancient-ness that makes this palace and garden captivating. Not only do I explore its delectable combination of Mughal (dome and spires) and Indian architecture (multicolor floral inlays on pillars and walls and calligraphy and encryption devoid of animals) but I also relish the story behind the palace’s construction. 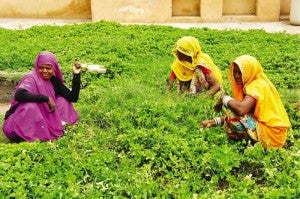 Built in 1728, this palace was dedicated by Maharajah Sawai Jai Singh II, the ruler of Amber, a Kachawaha Rajput, as a symbol of his love for Queen Sisodia Rani ka Bagh.

A palace nestled in low-lying lush greenery and surrounded by the same, sits like a gleaming golden crown on a mountain in its sheer majestic appeal. The palace keeper, holding a bunch of keys, asks if I want to get inside. I nod and promptly follow after him.

Housed inside the palace are the usual opulence of royalty—large urns and jars, gilded shisha pipes and intricately carved boudoir, now aged and dusty, but not without the shadow of their glorious past. The keeper points to the emerald-encrusted chandelier above me and in limited English utters “original,” then theatrically points to the crystal ones from across the room, “New.”

I walk through the palace and am surprised I am ushered even to the cordoned area—the foyer and waiting room and living room. As I sit on every chaise lounge where the queen once sat, on every settee where her guests used to lounge and linger perhaps for afternoon tea, I am embraced by the warped sense of time and of nobility, allowing me to conjure up images of how to be vicariously royal three thousand years ago.

Not all palaces open their private chambers and spaces (like Chandra Mahal of the City Palace, where the present reigning royal family lives) to tourists. But here in Sisodia, I am allowed inside the queen’s chambers. It is relatively small and low-ceilinged with very little pomp and exquisite ornamentation, save for the cursive carvings on walls and arches.

I am told by the keeper that most of the artifacts and valuables have been donated by the royal family to Central Museum or Albert Hall in downtown Jaipur, when all the five palaces, save two (City Palace and Rambagh Palace, now a posh hotel with daily room rates as much as INR120,000) were taken over by the Jaipur Municipal Council.

In one dark and lonely corner of the room lies the meant-to-be-hand-carried carriage which transports the rani who, in her queenly garb—hundreds of yards and layers of petticoat topped with muslin skirt, bangles and cuffs, chokers, crown and other royal finery, all the royal trimmings and frills—would be over a hundred pounds more than her actual weight. I 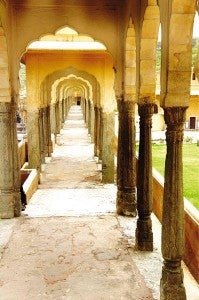 ask that I have my picture taken while seated on the carriage and the palace keeper, with a tentative grin, obliges.

The garden is another story on its own. Scenic, spacious, alluring in its beauty and surrounded by niches and pavilions with statues of Hindu gods and goddesses, it is an interesting study in traditional Indian and Mughal art and architecture.

Viewed from either end or from one of the four corners, the fountain, though now dried up, is a focal point that glistens in the mid-afternoon sun. In form and in function, the garden is not farfetched from the famed perfumed gardens of Lal Qila or Red Fort in New Delhi, or the famous fountain in Taj Mahal, Agra, only that it is not as long or far in terms of distance.

The garden is well-manicured, being kept that way by gardeners, mostly women in colorful saris that stand out among the vibrancy of green grass and mountain and the amber-colored palace.

The flora are nothing new to Asian tourists like me. There are kalachuchi trees, jasmine, palm and ferns and shrubs which thrive in tropical heat. The neat flower beds are akin to delectable eye candy, not unlike the famous figures, fabled figurines inside the once-flamboyant palace. A blend of the splendor of man’s artwork and nature’s pristine beauty, Sisodia Rani Palace and Garden is a refreshingly rewarding retreat.

Unlike Sisodia Garden, most everything in and around Vidyadhar Gardens spells more ancient than ancient itself. While it may have lost its former grandeur, it is relatively well-preserved. With its combination of Rajput and Mughal architecture intact, there is absolutely no graffiti save for the occasional pigeon droppings and a bird’s nest by the window. I, an unabashed and self-confessed lover of architecture both ancient and moderne, will treasure every minute spent in this garden.

Now undergoing reconstruction—a fact shared by the garden administrator during a quick chat—the place is well-secured by Indian police. The administrator himself, a mild-mannered man in his 40s, is very engaging and accommodating, and the police guides and guards eager to please. 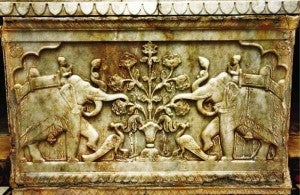 This garden was built in memory of a 17th-century master urban planner and Brahmin scholar from Bengal, Bhattacharya Vidyadhar. This accounts for the eponymous Vidyadhar Garden, in honor of the man who made Jaipur the most urbanized and most architecturally advanced city in the Indian subcontinent at the time. As he did in planning the city of Jaipur, this garden was constructed following the basic principles of Indian architecture, Shilpa Shastra, a tenet Vidyadhar himself adhered to with fanaticism.

With its tiered form, the garden has its distinct ancient charm. I savour each section and pavilion on a piecemeal basis—lingering in places that interest me. I inspect a crack or two on a pillar or pushing with my thumb an antique, now-loosened bolt on a door unhinged; sit by the window to take a long engaged look at a distant mountain or the charred ruins of arches of a glorious past long gone; or making sense out of the droning of motor vehicles—cars, motorbikes and trucks—cruising busily beneath me, the inventions in wheels discordant with the almost surreal antiqueness I immerse myself in. At one time, I am thinking of horse-drawn carriages and bullock-drawn carts and camels.

Piecemeal. I am taking my time. As a solo traveler I have all the time. Doing otherwise is overwhelming, just as I am overwhelmed by the panoramic vista that unveils itself before me—with every window or door opened by the guide solely for me, with every step of stairs I am told to scale, with every flower I am asked to smell and every awkward sign language I try my best to understand.

The stained glass dotting the arches are original, unfaded, charming. Adorning the walls are painted portraits of Sawai Jawa Singh. And Lord Krishna.

As it is in Sisodia, Vidyadhar has its share of flower beds and flower patches which are maintained by a cluster of Indian women unmindful of the raging rays of Rajashtani sun. The flowers evoke quaint aromas of home. They look and smell like jasmine or sampaguita, except that their color is purple. 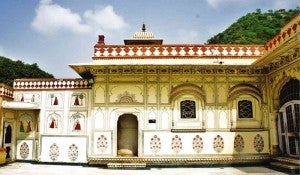 After I finish one pavilion, I ask to be ushered into the next. As there is no audio or English-speaking guide, I tail after the escorts from Indian police.

The walkway that connects one pavilion to the next is covered by what seem like distinct arches. Viewed from a distance, the architectural design has variation in threes and it is indeed very clever and charming that way. This leads to the other half of the garden, a pavilion that makes its way to the public swimming pool, which has since long dried up.

This garden is interesting for many reasons. For one, it is a testament to the genius of the greatest ancient architect Jaipur has ever had. Second, it is a fine example of an architectural design that conforms to Shilpa Shastra on a microscopic scale. Third, there is resurging interest in this garden, which has been undergoing reconstruction and restoration. And lastly, it has a mystic ancient charm that never fails to awe, and that may well be the best reason to visit and take as many pictures of Vidyadhar.

It takes me three hours to have my fill in this garden.

It is certainly worth every one breath I lose as I scale the steep flight of stairs, worth every drop of sweat as I traverse the minaret-covered walkway which connects me from the garden entrance to the far, far end that leads to one surprise doorway after another, and worth every sting of the searing summer sun as I walk its garden path inch by inch, unmindful of the red sandstone and pebble that stick to my feet. Because, yes, I know, I may never walk a garden like this again.