From martial arts to diving and triathlon, Richard Gutierrez has tried them all | Inquirer Lifestyle ❮ ❯ 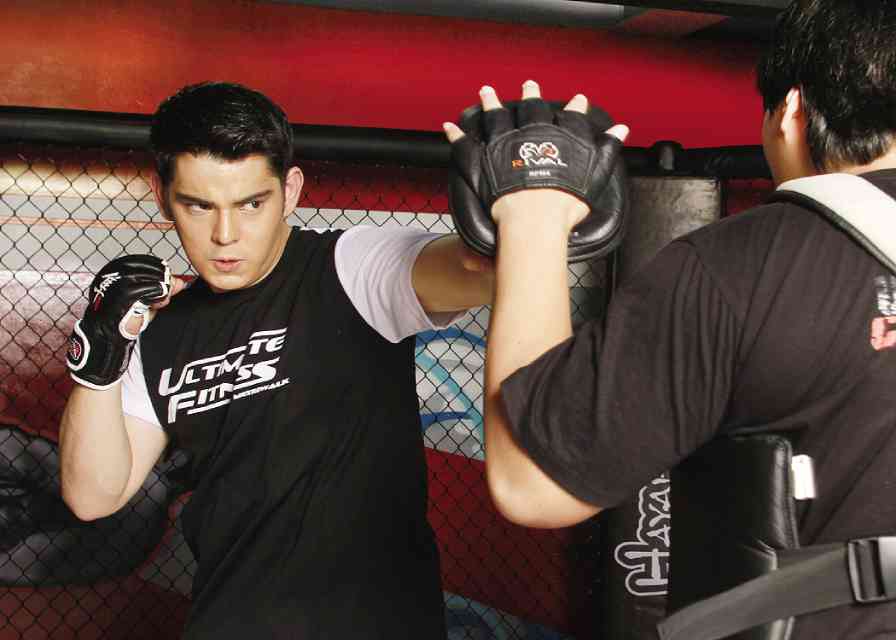 From martial arts to diving and triathlon, Richard Gutierrez has tried them all

When Gutierrez was growing up in America, his father, actor Eddie Gutierrez, exposed his children to sports. From age 10 to 14, the younger Gutierrez looked forward to attending martial arts classes after school. His daily routine was to take the bus from Beverly Hills to West Los Angeles, training for competitions.

He adds that he also took up karate for self-defense. Whenever he and his twin brother, Raymond, transferred to schools, their classmates tended to taunt and bully them. Being twins and ethnic minorities, they seemed like easy prey. But Gutierrez was not only well-equipped, he was also clever.

“I had to protect myself and my brother from these bullies. Since I was trained in martial arts, I got into fist fights. You need the confidence, knowing  that whatever happens, you can protect yourself. That was my mentality,” he says.

Still, Gutierrez won his foes over not only with his skills but with his charm. “I invited them to attend the martial arts school. Eventually they became my friends and teammates. There was a positive turnout. In the end, we had more friends than bullies,” he says with a chuckle.

Barely in his teens, Gutierrez, a brown belter in karate, was the state champion in California. “As a kid, martial arts  helped me to concentrate. In the US, many of my friends did stupid things. Martial arts made me stay home. I was focused on competing and training. It kept me out of trouble,” he notes.

He aimed for the black belt level and competed in the national tournament in the East Coast until his destiny changed.

His parents decided that their children should come home to the Philippines. While studying at De La Salle Zobel high school, Gutierrez joined the varsity teams in basketball, golf and tennis. He recalls waking up at 4 a.m. to leave their home in White Plains, Quezon City, to be on time for the 6 a.m. basketball practice in Alabang.

At 17 years old, Gutierrez started doing television shows  for GMA 7 as well as dramatic and romantic comedy movies. Wary of being stereotyped as a “pretty boy,” he urged producers to show off his mettle in martial arts. In 2005, Gutierrez starred in the action-fantasy drama “Mulawin (Bird Man),” which was followed by the movie of the same title.

“It became a major hit that changed my career,” he says. Producers and the public saw the physicality of the actor that immediately set him apart from his peers. His sportsmanship expanded his range as an entertainer as he appeared in action movies and hosted reality TV competition shows and natural history and wildlife programs.

“We would shoot ‘Survivor’ for 40 days, then it aired for three-and-a-half months. Since I was seen on TV every day, I couldn’t have another show. In those months, I wasn’t doing anything. That’s when I trained for triathlon.”

Gutierrez worked with coach Noy Jopson and joined the Xterra Off-road triathlons in Cebu and Guam. “I don’t keep a time record. I just wanted to test myself and enjoy the process. It surprised me that, out of all the three disciplines, swimming was my strength,” he says.

Gutierrez has been promoting his latest action movie for GMA Films, “Overtime.” While other actors are spoon-fed in the action scenes, Gutierrez collaborates with stunt choreographer Ralph Roxas and gives his own inputs: “He (Roxas) knows my strengths and what I’m capable of. It’s like being a kid again.”

Erwin John Tagle, managing director of Ultimate Fitness, explains, “When he was young, Richard was very competitive. He carried it on in his career. In modern martial arts, Richard is a thinking fighter. May diskarte siya. He knows he can win without using too much strength. He’s good in strategy.”

“When I’m in the zone, I can achieve my goal,” says Gutierrez.

He admits that he was not in shape before filming “Overtime.” After a four-month hiatus in the US and Europe, he gained weight. “It was wintertime, so you couldn’t go out and be active.”

Although he tried skiing in Switzerland, he was humbled by being the only adult among preschoolers in the lessons: “There was this toddler who was still using a pacifier, skiing so fast. I couldn’t even move.”

When he came home, Gutierrez hit the gym. After losing 25 pounds, he was ready for the camera. “Sports and working out are fun, but not dieting. But once you’ve convinced yourself that you will eat the right food, everything will fall into place. If you don’t eat right, you won’t lose weight,” he says.

His diet secret: “I cut down on carbs, sweets and salt—all the good things.”

With his passion for sports, Gutierrez had always dreamed of having a martial arts studio. He and some partners put up Ultimate Fitness in Metro Walk, which is famous among boxers, Muay Thai and mixed martial artists. The gym has developed its own strength and conditioning programs such as Fight Form and Caveman Training, both of which are based on martial arts and intense workouts such as tire flipping and battle ropes.

“This isn’t the gym for lifting weights,” he says.

Gutierrez’s significant other Sarah Lahbati spends more time than he does at the gym. “She turned out to be a good boxer. So I’d better not do anything stupid. Her hits are fast and strong,” he says.

Gutierrez also engages in motorcycling and diving. As a member of the Ducati Club, he has traveled from Manila to Dakak in five days. He enjoyed the route from Bacolod and Dumaguete as the vista of the sea and mountains unfolded in front of him. The motorcycling club recently drove to Anilao and capped its sojourn with a dive.

Although Anilao is famous for its biodiversity, Gutierrez still prefers Malapascua in Cebu for the rare sightings of the thresher shark, and Gato Island, also in Malapascua, for the coral kingdom and black-tipped sharks.

All told, Gutierrez says sports is a process that’s “fun to learn.”