So many cheeses, so little time | Inquirer Lifestyle ❮ ❯ 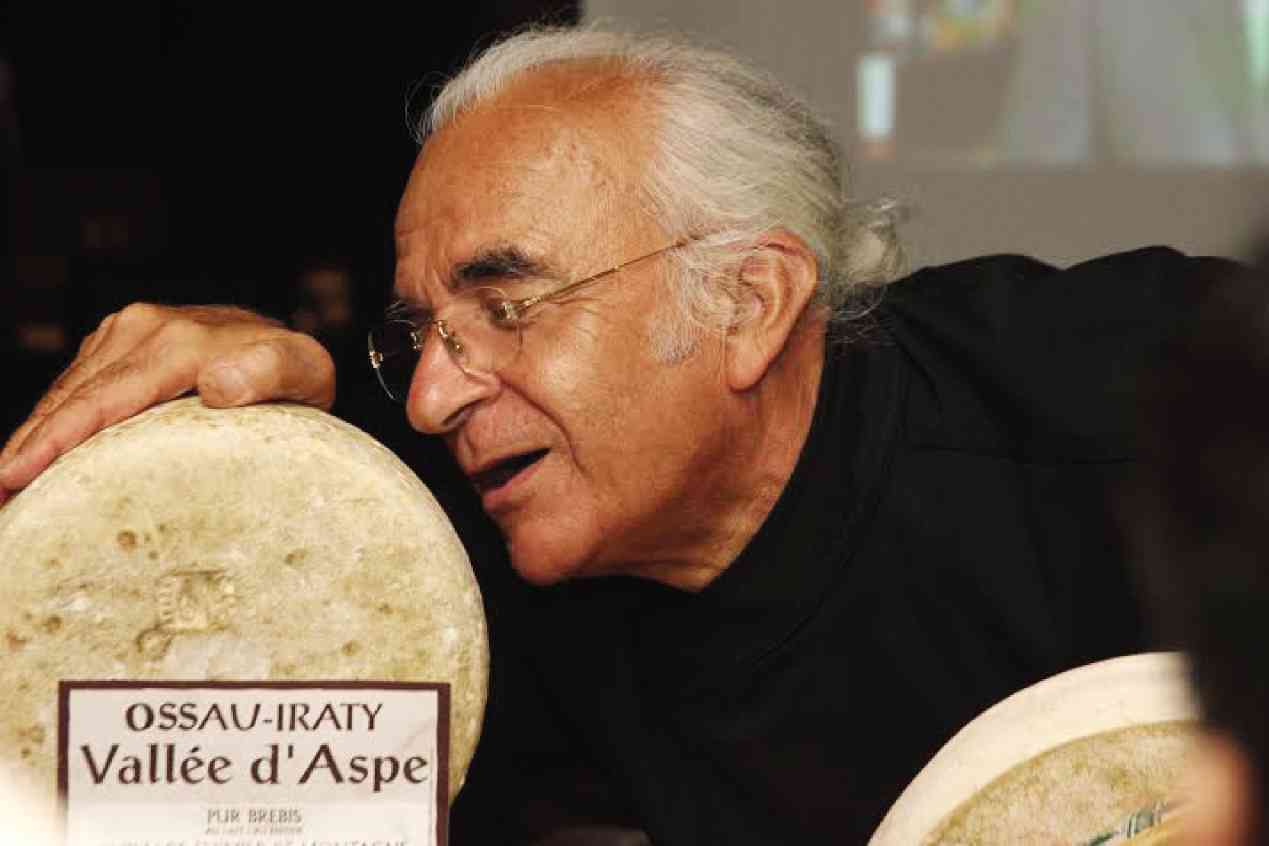 So many cheeses, so little time

Gerard Poulard, a short bespectacled Frenchman with dark bushy eyebrows and a ponytail, puts on his gloves before cutting off a wedge from a giant wheel of Ossau Iraty Basco.

Ossau Iraty Basco is a full cream, hand-pressed cheese with a natural yellow-orange rind that comes from the milk of the Basco-Bearnaise sheep.

Poulard then hands over the wedge of cheese to Eric Costille, executive chef of Sofitel Philippine Plaza, who sniffs it, nods his head, eats the cheese and washes it down with a glass of red wine.

Poulard then surveys a long mahogany-colored table groaning with 101 types of French cheeses that arrived at the hotel in time for its celebration of Bastille Day on July 14.

He watches the feast of fine cheese as a grandfather watches a toddler, looking both proud and anxious, as journalists check out his impressive stash with their eyes, and later with their palates.

Poulard is a world-renowned maître fromagier from Paris who began his career as a cook at age 14.

He specialized in cheese while going all around France to meet various cheese producers and now has a stash of about a thousand different fine cheeses.

Fine restaurants throughout the world look up to Poulard’s choices and opinions on the subject.

The hotel takes its role as ambassador of French gastronomy seriously, he explained.

“Cheese is part of the core of a French man’s DNA. Here in Manila, we bring cheese, a staple in the French diet and among the elements that define a true French man’s heart and soul to the Filipinos,” Laker said at the hotel’s French cheese presentation last week.

The first, Coeur Gourmand aux Figues from France’s Perigord region, had a light and fluffy texture that reminded everyone of cheesecake. The fig made it sweet and unique.

Second was Abbaye de la Pierre-Qui-Vire from cow’s milk that reminded this writer of kesong puti.

Next was Chevrotin des Aravis Fermier, creamy and smooth to the taste and has a distinct cheesy taste but did not have that pungent smell.

Sofitel said this variety made from a mix of raw goat’s milk was awarded the Appellation d’Origine Controlee in 2002 and is produced exclusively in the Haute Savoie region of France.

Fourth was Camembert de Normandie Joat from cow’s milk. It has a very strong flavor that made this writer think of mushrooms.

The last was Chabichou de Poitou AOC Villageois, an artisan cheese made from unpasteurized goat’s milk.

Described as “soft and unctuous,” this cheese is produced in the Poitou-Charentes region of France. It is saltier than the others and melts in the mouth.

When asked how he came up with the selection for the presentation, Poulard said: “I felt the Filipino does not like strong cheese. This selection I chose from the heart.”

Executive chef Costille pointed out that “any table in France” would always have “a glass of wine, some cheese and some bread.”

A ton of cheese monthly

This prompted GM Laker to note that Filipinos now have taken to fine cheese. Sofitel’s guests consume a ton of cheese in a month—no small feat since the hotel established the first cheese room in a five-star environment.

The cheese room was “a gamble,” he said. “We were uncertain whether it would be accepted by the Philippine community. But now the hotel is one of the largest consumers of cheese, even larger than some wholesalers.”

Laker said bringing in Poulard and wine expert David would be taking these French icons “to the next level.”

“One hundred and one cheeses of about 250 kilograms worth about P1 million… is a big commitment but we think it’s worthwhile. It sets us apart from other hotels in Manila,” he added.

Wine expert David said he would rather not recommend a specific wine to go with a specific cheese.

“I would not say it’s a perfect match of this and that. It depends on how you feel,” he explained.

David, however, could make recommendations based on the balance of tastes and complementarity of cheeses and wines.

For example, a strong cheese like a bleu would be best paired with a sweet wine from Lyon to play up the saltiness against the sweetness.

The hotel will hold Wine and Cheese Tasting Classes at L’Epicerie with Poulard and wine expert David 4:30-5:30 p.m. on July 10-13. Each class is limited to eight persons only and is priced at P1,500 net.

There will likewise be a Wine and Cheese Buffet at Le Bar from 7-10 p.m. with Poulard and David in attendance (P1,800 net).

Maître  fromagier Poulard’s cheese collection will be highlighted at Spiral’s L’Epicerie during lunch and dinner from July 9 to 13. There will be a fireworks display by the poolside in celebration of Bastille Day on July 13.