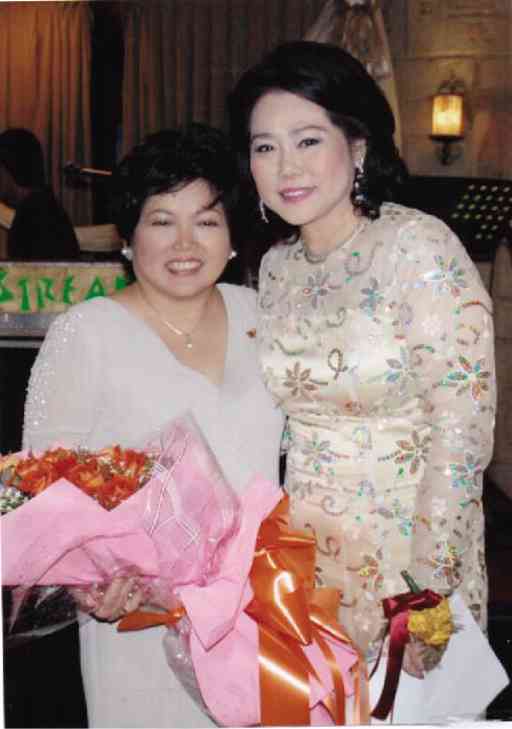 Zonta Manila 1 is an international service organization of top women executives, dahlings, who have banded together to improve the status of women and children worldwide through their various advocacies.

The Zonta Club of Manila 1, which has the distinction of being the first Zonta Club in Asia, installed its new guards of officers and directors for 2014-16 at the Manila Polo Club, Makati, palangga. Eye-catching Lalivan Karnchanachari, the incoming governor of District 17 of Zonta International, delivered the keynote address and administered the oath-taking of the new officers, led by Nila V. Mata as the new president.

Nonie T. Basilio, who is always involved in charity organizations and foundations and is past Area 1 director and past president of Zonta Manila 1, co-chaired the event along with director Minerva T. Tanseco, palangga.

Dinner entertainment featured delightful songs by the Reo Brothers of Tacloban City, plus a medley of classical and contemporary ditties by soprano (and Manila Zontian) Rachelle

In her acceptance speech, Zonta’s new prez Nila M. vowed to continue the services of Zonta Manila 1 and bared her plan to expand the vocational scholarship program of the club, to loud cheers from the members.

“Now on its 62nd year, Zonta Manila 1 continues to complement various service projects that are in consonance with the Zonta mission of advancing the status of women and children worldwide,” she said.

TRESemmé recently mounted a backstage fashion show, dahlings, where our top hair professionals revealed their styling secrets for gorgeous and runway-ready hair. Over 800 top and aspiring models from all over the country joined TRESemmé’s 2014 Runway Ready Fashion Show.

“These models had to prove that they were worthy to strut the runway, sport the latest hair trends as well as don the hottest ensembles from top retail brands and the country’s most celebrated designers,” explained top hairdresser and salon owner Jing Monis.

In this totally unique fashion extravaganza, the highlight was the behind-the-scenes action, as hair professionals—apart from Monis, there were also Lourd Ramos and and Victor Ortega—used TRESemmé products to help the models achieve the latest in hairstyle trends to complement the year’s hottest runway looks.

Achieving those envy-worthy ’dos is an easy feat with TRESemmé’s Keratin Smooth range, which infuses Keratin into every strand as keeps hair frizz-free for up to 48 hours.

TRESemmé’s Salon Finish Extra Hold Hair Spray, on the other hand, gives long-lasting extra firm hold, so you can control your style all day long even in damp or humid conditions.

The maiden edition of Dreams Get Real: The Search for the Next OPM Star was superbly organized by top-quality leather manufacturer McJim Classic Leather, which proclaimed three totally deserving talented winners during the finals night at Teatrino, Greenhills, dahlings.

Out of the six competing acts, the band Fifth Dynamics, vocal trio JBK and solo performer Neo Domingo proved they had what it takes to win and become the country’s newest recording artists. They received cash prizes and gift packs from McJim Classic Leather, a recording and management contract and a grant to film and release the music videos of their winning singles.

“The three-way tie was, indeed, unexpected,” said project head and young achiever Chris Cahilig. “Since JBK, Fifth Dynamics and Neo Domingo brought something different to the table image and talent-wise, we decided to give our all-out support instead to them by announcing all of them as grand champions.”

Judge Jim Paredes of the iconic Apo Hiking Society awarded the Critic’s Choice trophy to JBK for its song “Anong Meron Ka,” while the DJ’s Choice award was given to Domingo’s danceable single “Pagbigyan Mo Na.” Both songs were composed by Urie Tesorio.

“Dreams Get Real: The Compilation Album,” featuring the debut singles of the winners and McJim Dreamer Archetype CK Arca, was also launched that night. The album was produced

by Jonathan Ong of Sonic State Studio. Tesorio and Philpop finalist Raffy Calicdan and Oli Agustin of the band Letter Day Story are among the featured composers.

McJim has has always been an advocate of world-class and original Filipino talent, palangga. In the past, it has engaged José Mari Chan and Randy Santiago as brand endorsers. Its support for OPM continues with the exciting music competition it has launched.