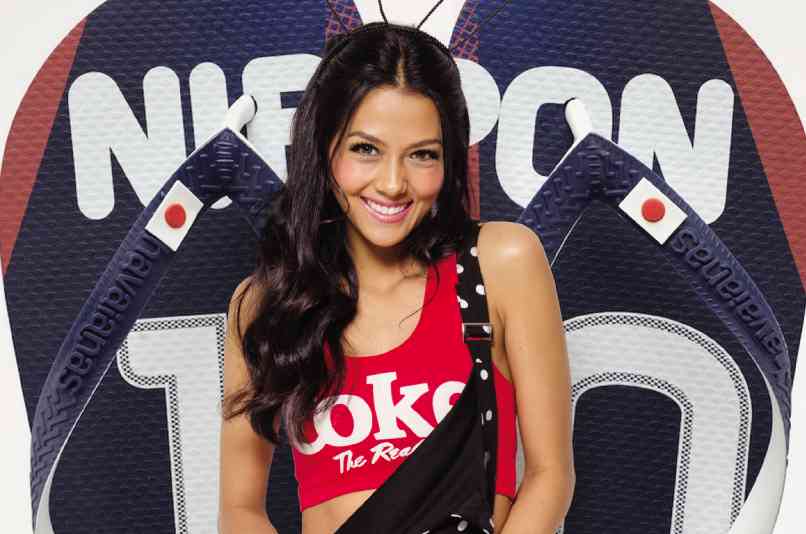 In Manila, Vanessa Matsunaga has found a home

Arriving at the shoot in a classic white top, denim jeans and nude pumps, Vanessa Matsunaga drew every pair of eyes in her direction the minute she stepped in.

Matching her perfected model off-duty look was not the expected attitude and aura, but a friendly and charming personality that made everyone appreciate her even more. With rhythmic strides, Vanessa approached each person in the room and introduced herself with a smile.

With a Japanese dad who was born and raised in Brazil and a pure Brazilian mom, Vanessa’s childhood years were spent in the colorful South American country. While she was growing up, everyone expected her to be a doctor. She, too, wanted to become one. “But, the studying takes too long. I didn’t want that,” Vanessa says.

So, she and brother Daniel took a leap of faith and dipped their toes in modeling. When Vanessa was 18 and Daniel was 16, they moved out of their home in Brazil and began modeling

After filling up four passports with stamps from over 20 countries, the siblings found a home in the Philippines, even though they have zero Filipino blood. It was a big decision to make, because a number of uncertainties came with it. But Vanessa knew that she and Daniel had a purpose here in the Philippines.

Living in the country meant having to learn the language, as well. Vanessa admits that she learned Tagalog from her yaya. At first, they were just conversing using signs and signals. But, Vanessa knew that she really had to learn to speak Tagalog when she got a pet bird.

She intended to name her bird Trixie, regardless of its gender. But her yaya kept saying to her, “Ate, baka lumipad yan! Lumipad, lumipad!” Vanessa replied by saying that Trixie was a better name for the bird. Her yaya kept repeating the same line, but Vanessa had no idea what the word “lumipad” meant. “So that’s how my bird’s name became Lumi,” Vanessa shares with a laugh.

When asked how she finds living in the Philippines, Vanessa beams and says, “Everyone is so nice to me!” Brazilian folk are more straightforward and confrontational. “When they want to say something, they just say it,” Vanessa shares. “Filipinos are more friendly and kind.”

Vanessa met her husband Jun Sunga here in the country, as well. She is a model and he is a photographer. They were bound to cross paths. Married for three years now, they have built a family with their pet dogs and birds.

Although Vanessa has already found home here, she still brings something of Brazil with her wherever she goes: the food. She particularly recommends feijoada, a stew of beans with beef and pork, that she enjoys cooking all the time.

The ingredients for this dish still come from Brazil, so she brings home a lot of carne whenever she comes home to Manila. “I just pray that the dogs don’t smell my bags and my luggage,”

Vanessa says with a laugh. But, she admits that her favorite Brazilian food is simply all the dishes that her mom cooks.

Among all the destinations she has been to, Vanessa says that her favorites have to be Japan and Korea. She enjoys the food in these countries the most. Visiting Japanese and Korean restaurants every so often is one of the things Vanessa loves to do when she has time on her hands.

Now that it is World Cup season, Vanessa is teaming up with Havaianas to support Field of Hope. It is a project of Futkal to rehabilitate communities affected by Typhoon “Yolanda.” Through football, the project aims to help the youth recover from the trauma, rebuild their lives and get back on a road to a brighter future. Vanessa could not be happier to be an ambassador for a cause as inspiring and life-changing as this.