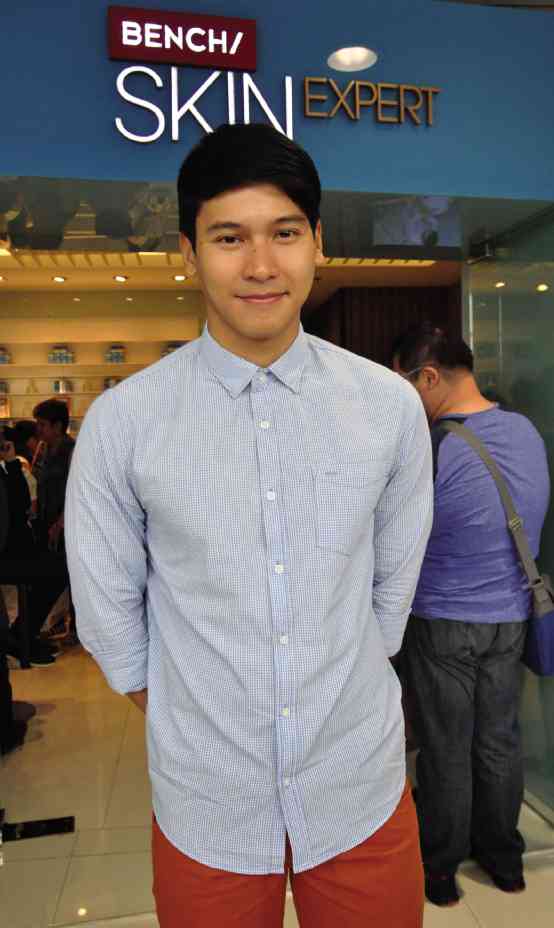 Why Enchong Dee can dare to bare

There’s a growing trend these days among local actors to go au naturel in front of the cameras. Thanks to technology, high-definition cameras are now capable of magnifying everything they capture, down to the tiniest pores of a person’s skin.

“If you wear makeup while taping for a soap, you might end up looking smoother than your leading lady,” said Enchong Dee, during the recent launch of RevLite, the latest addition to Bench Skin Expert’s growing list of beauty machines. “Because they’re expected to look the part, actresses still wear makeup. But men nowadays just need oil blotter to get rid of the shine.”

Thanks to good genes and access to a whole menu of lunchtime procedures like RevLite, Dee and many of his fellow young actors can dare to go bare without looking like the bad guy on TV.

“Believe it or not, when I was younger I had plenty of pimples, which left noticeable acne scars,” said the baby-faced Dee. “Now, they’re barely visible.”

Dee credits RevLite and other complimentary treatments for his improved skin. He started having RevLite treatments at Bench Skin Expert three months ago. If his busy schedule allows,

he goes back for follow-up treatments once every three weeks.

Not only is it painless, the US-perfected laser therapy has no downtime. A typical treatment, which is over in less than 10 minutes, involves the use of a heated wand that a trained doctor presses and rubs gently, one section at a time, on a person’s face.

“In my case, RevLite was able to lift my skin a little,” said Dee. “Areas on both cheeks that once had acne scars are now more even.”

Apart from minimizing the appearance of fine lines and wrinkles, RevLite is proving to be a versatile machine. Depending on the setting and treatment duration, it’s also designed to remove unsightly melasma, or skin discolorations, and freckles.

And should you fall for the mistake, like Johnny Depp once did while dating Wynona Ryder, of having somebody’s name or face tattooed on any part of your body, you need not be reminded of the person or the failed relationship forever. You can now have any unwanted tattoo removed effectively through RevLite.

“RevLite is actually the only technology that can effectively remove tattoos,” said Byers. “The number of sessions would depend on the tattoo’s color, size and location on the body.”

Black tattoos are the easiest to remove, while green and blue ones are the hardest. The further the tattoo is from the body’s lymphatic system, the harder it is to remove. That’s why tattoos on arms and legs are more difficult to erase compared to tattoos on the neck and body.

Byers likened a tattoo to a big boulder on the skin. Through its immune system, the body is actually trying to break down this boulder naturally. But because the ink used to draw the tattoo is so concentrated, the body needs help from machines like RevLite.

“The laser acts like a big hammer that breaks this boulder down to small pebbles,” Byers explained. “When it is broken down into smaller pieces, the body can easily eliminate those pebbles through the lymphatic system. They’re excreted out.”

As far as skin rejuvenation is concerned, RevLite offers a setting that helps stimulate collagen production while removing skin pigmentations like melasma and sunspots.

“Once you hasten collagen production, the tone and texture of the skin are improved,” said Byers. “Even the pore size is reduced.”

RevLite, he added, is also the only laser therapy in the world that’s proven to treat melasma—pigmentation that results from a combination of hormonal changes and sun exposure. This

As Byers explained it, RevLite’s Q switch NdYag laser produces very short nanosecond pulses designed to address a range of skin concerns, including spider veins on the face, that others can’t.

Those who are fond of whitening products, listen up. The incidence of melasma is said to be getting more common among Filipino women.

“If you use whitening products regularly and you don’t wear sunblock or any type of sun protection, you tend to get melasma,” said Ruby Chavez, managing director of Broadmedic, local distributor of RevLite.

Melasma, she added, is not to be confused with liver spots, another form of pigmentation or “stain on the skin.” Thankfully, RevLite can also zap those pesky liver spots away.

Apart from acne scars, RevLite can also address “fresh” acne by lowering sebaceous gland activity and zeroing in on pimple-causing dirt and bacteria. Depending on the person’s dermatologist, RevLite can even be a viable and effective option from all that painful and bloody pricking and facial injections.

“This is definitely a much less painful, much less bloody way of dealing with pimples,” said Byers. “You don’t have to worry about needles, creams and potions. What goes through your skin is basically light.”

As amazing as it is, RevLite has its limitations. It can’t, for instance, treat big red birthmarks on the face, which are also known as port wine stains. Although it could zap away peach fuss on the face and certain parts of the body, it’s also useless in getting rid of thick body and facial hair.