Would you invite Imelda Marcos to your school? | Inquirer Lifestyle ❮ ❯ 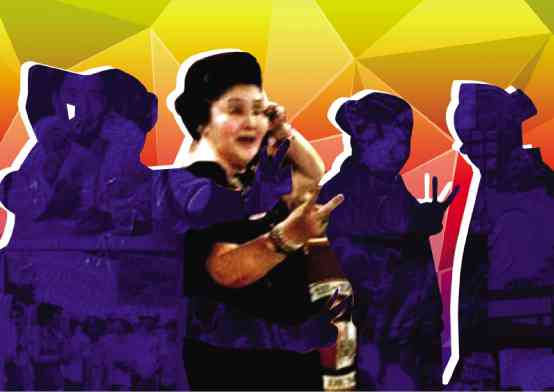 Would you invite Imelda Marcos to your school?

People had different opinions on the invitation, but what turned out to be most controversial was the picture released of Mrs. Marcos and a few Ateneans striking a pose—flashing a “V” sign reminiscent of the dictator, Ferdinand Marcos, and his followers.

This is one of the times social media has shown itself to be a double-edged sword. Such sites have spread either negative or positive feelings toward the issue, drawing people in and eliciting responses.

While adults had their own ideas on the controversy, we teenagers, as the next generation, have our thoughts as well.

A random handful of students were asked their opinion on Ateneo’s invitation to Imelda Marcos:

“I’m okay with it. I am pro-Marcos in a way, as I approve of his vision for the betterment of the country—we could have surpassed Singapore during his time.” —Nicola Isabel, freshman, Everest Academy

“I think it was in really poor taste for Ateneo to even invite Imelda Marcos to be a guest speaker. It’s morally wrong for the school to associate with someone who represents such a dark time in Philippine history.” –Alec Regino, junior from Brent International School Manila

“I think there was nothing wrong with ASF inviting Imelda Marcos to their anniversary. It was not an act of hypocrisy or anything of the sort. It was an act of appreciation for her help, which is why I think Ateneo did the right thing in inviting her.” —Nadya Hamawy, sophomore from the University of the Philippines

“It’s pretty appalling that one of the top universities in our country could even think of inviting Imelda Marcos to any event. Everyone knows about the crimes she committed, atrocities for which she hasn’t been adequately punished. By inviting her as guest of honor, as though she had any values worthy of being passed on, Ateneo has (intentionally or not) supported her as a public figure.” —Student at Wesleyan University

“I didn’t even know about this. But I would invite Imelda Marcos. Just because she’s IMELDA MARCOS.” —JL, 18, De La Salle-College of Saint Benilde

“Honestly, I don’t see why everyone is making such a big deal of it. I think it was a really nice gesture that she donated to the ASF. Yes, she is a Marcos and she was the cause of a lot of suffering before. But a good deed is still a good deed, despite what you did in your past. I would definitely invite her to Ateneo again.” —Kelsey, 18, Ateneo de Manila University

“Obviously it was a bad decision because, otherwise, their president would not have apologized. I wouldn’t invite her to be a guest speaker at my school. There are so many other people we can learn from. But if I had to ask her a question, I would ask, ‘Is there anything you would change about the way your husband ran the country?’” —Cindy, 19, University of Santo Tomas

While still facing corruption and poverty, the Philippines has definitely come a long way since martial law, and it is my opinion that we should not be thrown back to a time of inequality and tyranny.

However, because Mrs. Marcos was in fact part of the ASF’s establishment in 1974, we also should not expect the university to ignore one of its key benefactors. Instead of focusing solely on her many pairs of shoes, or the fact that she is known as half of the dictatorship that paralyzed the Philippines in 1972, we should look at the issue in its current context.

To some extent, Ateneo’s inviting Mrs. Marcos showed their lack of perspective and values; they should have been much more aware of the consequences, as it seems to many that they are being used as a tool for the comeback of the Marcoses.

Furthermore, I believe it was unfortunate that the picture with the “V” sign went viral. It has led many to interpret the photo in whatever way they please, when it may have just been a fun and harmless selfie. To many, the picture could have symbolized opposition to the Aquino administration, again throwing them back to a time that we would all rather not revisit.

In conclusion, I believe it is human nature to find evil in anything. The evil is magnified when given an authentic source, such as the conjugal dictatorship of the Marcoses or the implementation of martial law under their rule.

Such evil is also hard to forget, tied to a time when the suffering of Filipinos was at its height. Still, she isn’t any better or worse than the politicians in this day and age who take money from the country’s coffers. In fact, was it not so long ago when we penalized Janet Napoles for her lavish spending in the legendary multi-billion-peso pork barrel scam?

Though that in no way compares to the decades of killings, disappearances, and suppression of freedom of speech under Marcos rule, I believe that such a shadowed time is over forever, and this little stunt of Ateneo’s was no more than a reminder, or a lesson taught to us, the youth.