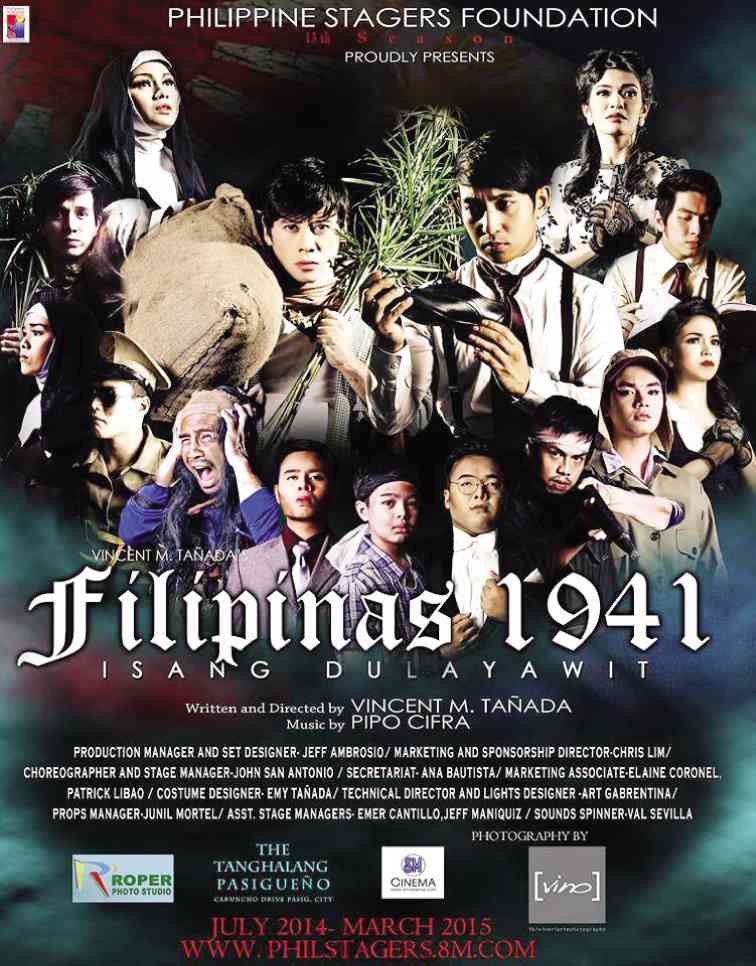 THE PLAY has a soft opening today (July 12) at SM North Edsa.

In December 1941 Japanese warplanes, after bombing Pearl Harbor in Hawaii, zoom eastward in the Pacific Ocean to bomb Baguio and Manila. Air power in the country was virtually cut off, although some young Filipino pilots valiantly challenged the superior might of the Japanese Air Force.

Manila was declared an Open City. It was the start of three years of untold suffering for the Filipino people.

Two brothers, Felipe and Nestor, respond to the crisis in different ways. Felipe joins the underground; Nestor becomes a collaborator.

This is the historical background of the latest production of the Philippine Stagers Foundation (PSF)—a musical play entitled “Filipinas 1941,” written and directed by Vince Tañada, who also plays Felipe. His brother Nestor is played by young PSF actor Patrick Libao.

The music by Pipo Cifra is fully orchestrated, with melodic sounds and using indigenous as well as Japanese instruments— “really grand,” says Tañada. Cifra himself conducts the University of Santo Tomas Symphony Orchestra.

The younger brother Nestor, who has been business-minded since high school days, operates a shoe factory during wartime, supplies boots to the Japanese military and says he only wants to feed his family in the midst of hunger. The brothers are eventually reunited. Felipe exhorts him to stop collaborating with the enemy, and Nestor has to make a difficult decision.

“Filipinas 1941” looks set to be a bigger production than PSF’s recent “Bonifacio: Isang Sarswela.” It has a cast of 40, and more than 30 technical and production staff.

The musical returns to SM North Edsa in August, with performances to be staged Wednesdays-Fridays of the month.

“The play was created to fortify the Filipino spirit and inspire the youth,” says Tañada. “Kasi we are experiencing a lot of problems in the country, such as corruption, etc. I want to create original Filipino musicals, unlike other theater companies that import Broadway musicals. This has really been my advocacy.”

“I believe in the unlimited power and gift of the Filipinos to create their own musicals, so the youth of today can be inspired,” he adds. “I feel we are losing our own cultural identity as a nation. Kasi masyado tayong exposed to, say, K-Pop, with Korean international singers coming to Manila… We don’t seem to appreciate that we have our own art we could enhance and develop.”

There are plans to bring the musical play to schools in the province, starting this year up to early next year.

“We are trying to convince the schools that education cannot be confined to the four walls of the classroom,” says Tañada. “We really need to expose our students to this kind of presentation in order for them to learn more.”