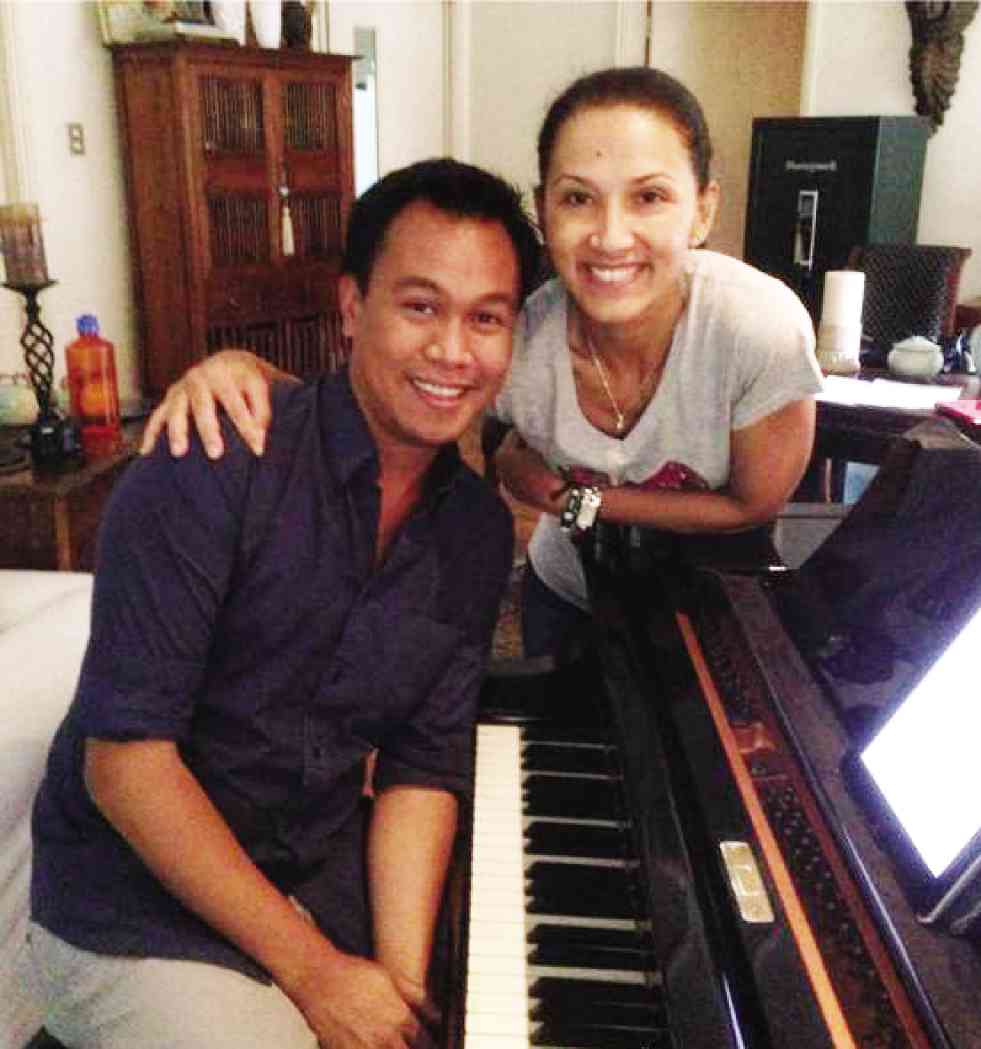 FORTICH with Menchu Lauchengco- Yulo, one of the guest artists in his forthcoming concert at Teatrino

Before Rony Fortich became music director of Hong Kong Disneyland, he was an accompanist, a wedding pianist and an accountant.

Along the way, he has worked with theater veterans such as Menchu Launchengco-Yulo, Audie Gemora, Shiela Francisco, Sweet Plantado-Tiongson, and became good friends with them.

“I become the ‘bartender,’ Fortich says. “That’s how I feel as a pianist. I bond with people, and get to ask them what’s wrong. The work brought us together, but the friendship made it last.”

He would be accompanist and music director to so many shows that his birthday parties became a general assembly of Philippine musical theater’s who’s who. For the past seven years, on April 13, Fortich would round up theater friends to join his birthday jam.

It started off simple: A piano, a mic and a few people. But the event has become an annual sing-off among industry colleagues. Tiongson called it “Payabangan,” with Payabangan 2013 seeing the most guests at 100.

Fortich recalls: “Last year, I asked Lea Salonga to sing ‘Back to Before’ from the musical ‘Ragtime.’ I read on Playbill that she sang it in New York. She said yes, and my head exploded.”

He used to ask guests to sing a song of their choice, then he eventually assigned them a piece. These are songs that the singers won’t likely be able to sing on stage because of casting reasons, or because the show might never be staged in Manila.

“No disclaimers” has been the informal theme for the birthday jams, since singers always “come up with excuses to underperform—even the most professional of them.”

“Everyone says, ‘I don’t have a voice today,’ ‘I forgot my lyrics,’ ‘I don’t remember the words.’ There’s always a disclaimer,” Fortich explains. “In my birthday jam, they go up and sing to a safe crowd, without judgement.”

Participants are often more nervous since they’re performing before fellow singers, but at the end of the party, everyone has fun.

Fortich usually opens the party with his arrangement. Last year, he came up with his version of “American Pie,” replete with commentaries on how interesting the year was for theater.

“I break the ice and show guests that if I can come up there and sing, slightly off key, maybe others would do so, too.”

This is different from his Disneyland stint where he produces seasonal park music. Here, he’s on the piano as an accompanist. As Fortich says, “I love being in the piano with a singer. That’s where I’m happiest.”

“Best Seat in the House” is produced for Stages by Gemora, who had been asking Fortich for years to do a concert.

“I kept on saying no because, honestly, I don’t have a name. What would be the draw?” says Fortich.

He finally said yes in January, and if this gig is something like his birthday jams, the audience has a lot to look forward to. For one, he will be playing Disney songs.

“There will be Disney stuff—that’s my home—plus a little bit of ‘Wicked.’ I’ll be playing songs from Ateneo Blue Repertory productions, and some compositions from ‘The Bluebird of Happiness’ and  ‘Noah’ musicals.”

Expect, too, a few Tagalog songs done theater-style, such as “Limang-Dipang Tao” by Ryan Cayabyab.

The lineup centers on story-telling songs—the feel-good variety Fortich has always been comfortable with. He credits this to his being a pioneer in Hong Kong Disneyland where he makes happy music, and his happy childhood.

Fortich grew up around music. His parents took him to watch live performances of groups such as the New Minstrels, and music has always been part of the household. His mom, a nurse, got him into violin classes as a kid, and later he learned to play piano on his own.

Fortich knew he wanted to be a musician, but, as early as high school, he thought he wouldn’t make money of out it.

“I asked my mom what to take in college, and she suggested that I become an accountant. I took up accountancy in De La Salle University, but I kept music on the side. I joined the DLSU chorale, that’s where I learned how to arrange music.”

He finished accountancy, passed the board, got his license, and, at 22, was to be hired as an accountant in a multinational company—his dream job back them.

“Around the same time, I was asked to audition for ‘The Little Mermaid’ musical of Trumpets. I chose that, got in and never looked back.”

He would play odd gigs in between shows—weddings, launches, funerals. He recalls being an “eternal wedding pianist, watching trays of food go by while eating packed food off Styrofoam packs with Cathy [Azanza-Dy]. That’s how we became friends.”

He would spend five hours in the audition room, playing whatever the singer, often too nervous to notice, handed him.

He played in events. One time, he played unknowingly positioned beside a smoke machine. “It went off and smoke was all over. I disappeared before the audience, and I couldn’t see my score. I just laughed if off and played.”

It was a gig-to-gig survival thing, until he became a part of a “Rent” production in Singapore.

“I was flying to Singapore and that moment, looking out the plane, I decided what I wanted to do with the rest of my life was music.” The song playing on his head then? Tina Arena’s “Now I Can Dance.

He was hired as rehearsal pianist for “Rent,” and was promoted to keyboardist a week before the show.

His biggest break was getting hired to be the music director for Hong Kong Disneyland, where he produces and approves music used in the park. On weekends, he watches shows and works on projects such as the coming concert. Fortich is based in Hong Kong, but often comes to the Philippines to visit his family.

“The show is also a way of telling my parents that I’ve done okay. My nephews are happy when I’m here because I bring a lot of Disney stuff,” Fortich says with a laugh.

“In a lounge act and in theater, the singer gets the applause and the accompanist is hardly recognized. Now, I’m headlining it with theater people whom I’ve had coffee and caught up with, and this is what theater people do best—tell stories.”

“‘Best Seat in the House’ tells the audience that the accompanist now has a place.”