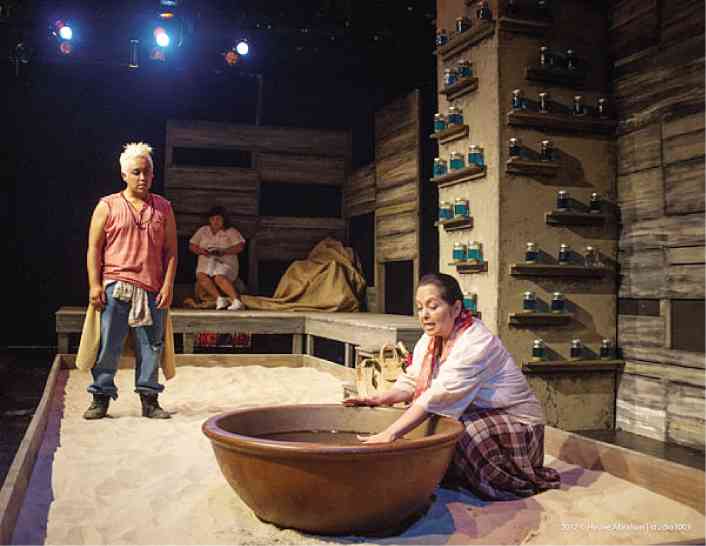 Songs like “Shining” and “Giggles” made Becca Godinez a pop star and top concert artist in the ’80s. But, in many ways, theater was her first love; it established the discipline that helped her gain a foothold in show biz and grow in many other art forms.

The lady who was a Tinig Awardee and who represented the Philippines at the 10th Tokyo Music Festival in an era that marked the renaissance of Pinoy pop culture was, in fact, a theater arts major. Prior to making waves in the music scene, she was creating her own mark in the Manila dramatic circuit with roles like Agnes in “Mame” and Tuptim in “The King and I.”

After almost 33 years, Godinez is back in the Philippines to reconnect with her roots after many years in the United States—and she’s producing her first play in the country: “Flipzoids,” Ralph B. Peña’s haunting, bittersweet drama-comedy of the Filipino immigrant story in America, which fittingly captures and embodies Godinez’s life journey.

Godinez left the Philippines for America in the mid-’80s in what could have been called a blissful phase. In the pre-Internet age, she was “receiving bayong of fan [snail] mail.” She was at the height of her career, was newly married to Brazilian singer-songwriter Morris Albert, and opportunities in the supposed land of promise lay waiting to be explored.

When she quit back then, she knew it was for good. There was no turning back and no reason to keep looking back. She forged ahead and went the rounds of corporate America, climbing up the intensely competitive professional ladder in Los Angeles. Godinez says she did miss performing and writing music.

Fortunately, persistent requests by Filipino communities in the US for her to sing a number here and there in their many events filled the gap. There were also occasions when she shared the stage with fellow Filipino artists such as apl.de.ap and Martin Nievera.

Acting on stage, whether in straight dramas or musicals, took a backseat until 2005. An actress friend submitted Godinez’s name to director Mona Simpson of the Reader’s Theater. The part was of a Filipino maid in Beverly Hills who had to take care of an American kid while pining for her own children in the Philippines. The audition happened through the phone—and Godinez got the part. 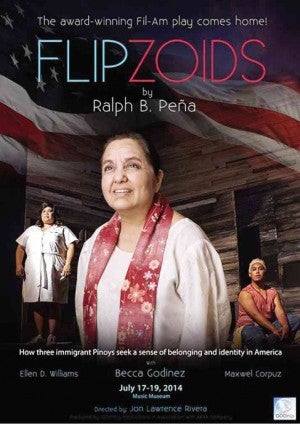 One thing led to another, and Godinez became more involved with the theater communities in LA. One producer who had seen her in one audition gave her a script to read. It was 2011, the script was “Flipzoids,” and right away Godinez knew she had the role of a lifetime—one that, as an actress, she could bond with on an almost visceral level.

The role she would eventually play in the Los Angeles Theater Center—and which she incarnates in Manila this month—is Aying, a 72-year-old woman brought to America by a daughter fighting for her own American dream but whom she could no longer connect with. That connection is instead made with Redford, the other member in the three-character one-act play.

“What Aying can no longer find in her daughter she finds in this young boy, Redford,” says Godinez. “He grew up in the US and was brought up by Filipino parents who want to have nothing to do with the Philippines. What Aying misses in her daughter Evangelina she finds in Redford—a willingness to learn about his roots. He wants this so much, and Aying keeps saying, ‘Keep going, do not forget [where you came from].’”

“The script kept drawing me in,” says Godinez. “I know this person—I know who she is, how she moves, what she’s feeling. One of the lines that Aying says is she could still smell her mother’s cooking in Pagudpud. That’s also one of the things, among many, that tied me with the character.”

“‘Flipzoids’ deserves to be seen by anyone who is an immigrant. It is about displacement, home, roots, culture, adjustment, extreme loneliness, hope—all these things rolled into one,” says Godinez.

But, despite the poignancy in the script and the gravity of the topic, the play—and Aying in particular—has a funny side.

“She is not sentimental, she is naughty,” hints Godinez. “This is the Filipino migrant story—but if the audience is not cracking up within the first 15 minutes, then we have not done our jobs. It can be melodramatic, but it’s not.”

“Flipzoids” was first staged in Manila in 1996 by the Asian-American theater company Ma-Yi Theater Company. Critics raved about its sharp wit, emotional pathos and compelling performances. But Jon Lawrence Rivera, director of the Los Angeles production that Godinez is bringing to Manila, has a different approach.

“Redford is looking for relationships in a bathroom in a beach. He sees Aying doing a ritual dance,” says Godinez. “But our set is not naturalistic. Our beach is a rectangular thing containing three tons of sand. Jon’s sets are never real. He challenges your imagination.”

Rivera and the two other performers in this new Manila production, Ellen D. Williams (Evangelina) and Maxwell Corpuz (Reford), are second-generation Filipino-Americans who were either born in the US or who had immigrated from the Philippines while they were still very young children.

Godinez recounts that during rehearsals, they would regard her as a one-woman source of Filipino knowledge and lore, asking her to coach them on the diction of a Tagalog prayer or what a particular Filipino word meant.

It was Rivera who first mentioned the idea to Godinez to bring “Flipzoids” to Manila. The timing was right: Her daughter’s upcoming marriage and her husband’s support had allowed Godinez to travel more frequently to the Philippines. Soon enough, she found old friends in Manila, such as theater artists Enchang Kaimo and Freddie Santos and childhood buddies like Danny Moran of Amici Restaurant, all lending an extra hand through counsel, networking and resources.

“I produced ‘Flipzoids’ because of the desire for the Filipino audience to see a beautiful work of art,” she says. “There was a time back then when I wanted to go home; Christmas  in the States was particularly bad. It took me a long time to become a US citizen because I felt I was betraying my Filipino culture. I love being Pinoy.

“But had I gone home at that point, it would have been defeat. I would not have given myself a chance to prove myself in a foreign country. But now I am ready to go back and forth between the US to the Philippines.  The stars have aligned.”