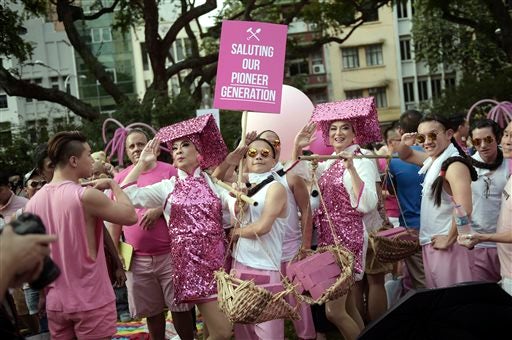 Gay activists dressed as female construction workers or Samsui Women and laborers from the colonial period, pose in mock salute on June 28 in Singapore. AP

SINGAPORE–A children’s book inspired by a real-life story of two male penguins raising a baby chick in New York’s zoo has been deemed inappropriate by state-run Singapore libraries, and the conservative city-state’s information minister said he supports the decision to destroy all copies alongside two other titles.

The National Library Board, which runs 26 public libraries in Singapore, pulled from the shelves and said it would “pulp” the copies of three titles, citing complaints their content goes against Singapore’s family values.

The books are “And Tango Makes Three,” about a male-male penguin couple in the Central Park Zoo; “The White Swan Express: A Story About Adoption,” which involves a lesbian couple; and “Who’s In My Family: All About Our Families.”

“The prevailing norms, which the overwhelming majority of Singaporeans accept, support teaching children about conventional families, but not about alternative, non-traditional families, which is what the books in question are about,” Minister of Communications and Information Yaacob Ibrahim said Friday.

He added: “Societies are never static, and will change over time. But NLB’s approach is to reflect existing social norms, and not to challenge or seek to change them.”

It was not clear how and when the books will be destroyed.

The decision triggered an online petition and an open letter to spare the books with thousands of signatures collected. Some are calling for a boycott of the libraries and their events.

Donald Low, author of “Hard Choices: Challenging the Singapore Consensus,” a book recommending policy reforms in the tightly-controlled Southeast Asian state, said he had pulled out of the Singapore Writers’ Festival in November to protest the decision.

“I see no evidence of a significant segment of Singapore society objecting to these books being in our public libraries, even if the majority of Singaporeans are conservative,” Low said.

He objected to Yaacob’s comments, saying that “attitudes are more complex and nuanced than the reductionist view the minister has taken.”

“I’ve always believed that Singapore society is generally tolerant, open and relaxed about people whose sexual orientations are different from ours — even if we don’t agree with them,” Low said.