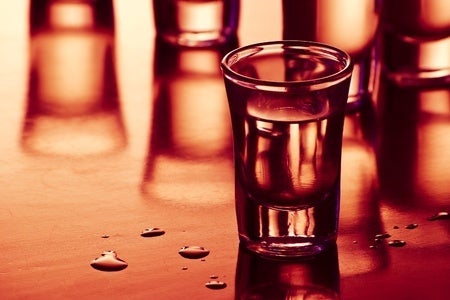 MANILA, Philippines – A shot of liquor could give you a dose of toxic lead.

The EcoWaste Coalition cautioned alcohol drinkers against the use of shot glasses that could be tainted with the toxic metal, making the “tagay” a risky bonding ritual.

“The shot glass is a key piece of the fraternal tagay where friends take turns drinking their favorite beer or liquor using a single glass,”  EcoWaste Project Protect coordinator Thony Dizon said. “The bad news is most of the shot glasses we bought and screened for harmful chemicals were positive for lead, a brain-damaging and endocrine-disrupting chemical.”

EcoWaste said that 13 shot glasses they bought at prices ranging from P6 to P94.75 contained up to 74,800 parts per million (ppm) of lead, way beyond the 90-ppm permissible limit for lead in paints.

Out of the 15 samples tested by the group with a handheld x-ray fluorescence device, only two shot glasses—one with a hand-painted calesa drawing and the other with a vinta—had no trace of lead.

“Drinkers should not only be mindful of the hygiene issue when it comes to sharing a shot glass. They also need to be wary of the lead on the painted design that could chip and get ingested by the person drinking from the glass. There is no known amount of lead that will not cause harm to human health,” Dizon said.

According to the World Health Organization, while young children are most susceptible to lead exposure, both adult men and women also risk damage to the nervous, cardiovascular, digestive, hematologic, renal and reproductive systems from the toxic metal.

EcoWaste called on manufacturers to make sure that beverage and food containers are free of lead and other toxins for public health and the environment.