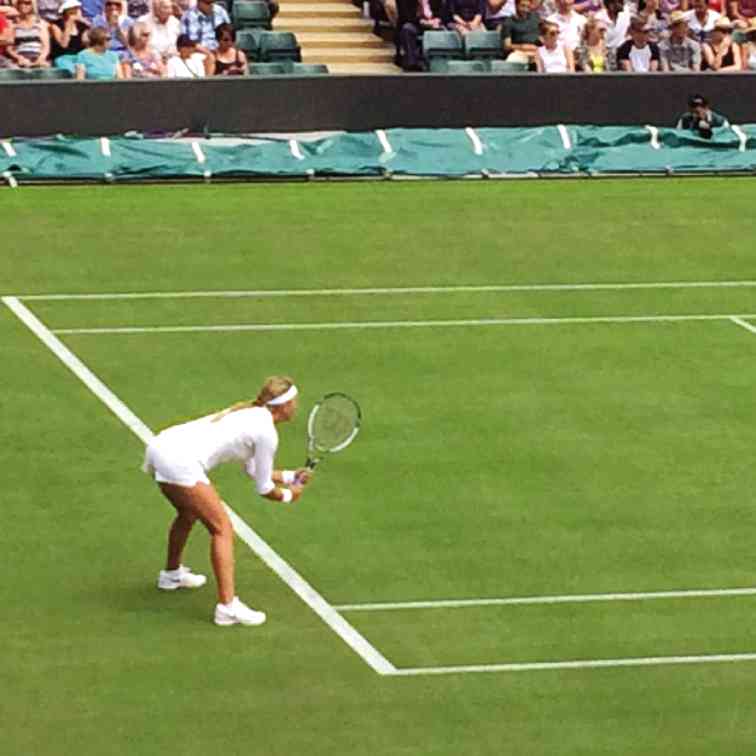 A day in Wimbledon

I’m not into bucket lists, mainly because my mind is so busy—cluttered, actually—to make one, and because I generally like to take whatever today gives.

Planning life isn’t actually my form of entertainment. But when I set foot on Wimbledon two weeks ago, I knew right away it was bucket list material, if ever I needed one.

We happened to be in London when word came to Stores Specialists Inc. public relations consultant and our travel companion, Susan Joven, that Lacoste could spare two seats for us on opening day of Wimbledon. I was incredulous. Wimbledon tickets aren’t exactly easy to come by.

There are tennis grand slams—and there is Wimbledon, which is more a tradition, a heritage rooted as much in British aristocracy and upper-crust decorum, as it is in the physically and mentally rigorous sport that is tennis. One doesn’t have to play tennis to have heard of the All-England Club.

People are known to stay up into the wee hours just to watch it on TV, as they do other grand slams, and, of course, the World Cup. Woody Allen turned it into a romantic tragedy in “Match Point.” Then there’s the movie “Wimbledon.” The allure of the oldest and widely considered most prestigious tennis tournament in the world borders on reverence.

And so, on that Monday morning, the opening day of Wimbledon, as we watched on BBC the snaking line of people—popularly called the “Wimbledon queue”—who had camped out around the venue, the All-England Club, as early as over the weekend, our excitement peaked as we took the Piccadilly line from Knightsbridge. We got off at Earl’s Court to change into the District Line that would take us to Southfields.

At Southfields, the train doors opened onto a platform lined with the Wimbledon green carpet. We were greeted with the sight of seats covered in the Wimbledon colors of green and purple—with the words “Tradition awaits” and “Wimbledon awaits” printed on them. The mid-

As we emerged on the street corner, a uniformed Wimbledon steward greeted us and the other people coming out of the train station, to ask if we had tickets or not, and pointed us in the direction of the All-England Club. It was that organized.

In cool, sunny weather, we walked down the road leading to the All-England Club, with the streets on both sides lined with Wimbledon banners. Such was the strong yet tastefully appropriate branding of a tradition in a cozy English town.

The gates had just opened when we reached the All-England Club. Would anyone be surprised that we were one hour early for our appointed time with Lacoste?

People gathered just beyond the entrance until the opening ceremony was about to begin, and they were allowed up the steps and on to the grounds.

Wimbledon looked as lovely and as Old World as you imagined—a vast but compact expanse of green, ivy creeping up the buildings, white and violet blooms popping up strategically. You imagined how it must have been in the lifetime of the likes of Rene Lacoste. Gabrielle “Coco” Chanel resorted to designing loose, unstructured dresses precisely for games such as tennis that she and her party-loving friends played (not in Wimbledon, however, as far as I read.) And that was how Chanel designed the tennis bracelet, a rich accessory they wore to the games.

You walked around the Wimbledon gardens teeming with people who were casually, not skimpily, dressed as they would be at, say, the US or Australian Open. I hardly spotted women in shorts.

The Picnic Hill was where people who didn’t have tickets to the Centre Court or the other courts gathered, sat on the benches or on the grass, and ate and drank. It used to be called Henman Hill, named after the British top seed Tim Henman, the hope of Britain to win Wimbledon before Andy Murray came along.

Then the mound came to be known as Murray Mound; the Brits certainly knew how to put pressure on their top seeds. It was on that mini-hill fronting a giant screen where the people watched and cheered on the action on Centre Court. Now it’s called Picnic Hill.

One could actually walk by or stop by the other courts to watch the matches.

Perhaps as a nod to tradition and heritage, the elderly served as guides, who wore uniforms printed with the tag “Honorary Steward.” We would learn that these elderly men and women came from all over England, many of them performing the honored task year after year. How the old are given a role, even a nominal one, in an iconic event as Wimbledon, speaks well of British society in an era that worships only youth. And these “Honorary Stewards,” if they had the minute to chat with you, could tell you about Wimbledon’s past.

It was quite impressive. Indeed, we could learn a thing or two about how the British people treasure—and promote—their history and heritage. And just look at London, with its historic, reused buildings, and the old English towns, and you’d realize how, to Britain, heritage preservation has become a profitable and viable attraction.

And the young? Teenaged girls in Wimbledon uniforms roamed the grounds, metal sticks in hand. These rods or sticks had hooks at their tips used to pick up the litter, even the tiniest pieces of paper. That explained partly why Wimbledon had no litter, despite the heavy human traffic.

We finally got to taste the strawberries and cream that Wimbledon has been known for. They really tasted good—fresh and juicy strawberries, the cream not too sweet.

In Court One, as the seats filled up—by the way, one could get hand-carried cushions for the seats, obviously to enable one to survive long matches—we felt the collective quiver of anticipation. It heightened as soon as one saw the ball boys and ball girls, sporty in their blue uniforms, file in in a straight line, each one carrying a jug of water.

This was followed by the procession of linesmen and lineswomen in blazers, who, after taking their positions, took off their blazers and, as if on cue, hung them on their chairs. Such structured and seemingly synchronized movements enhanced the decorum of the moment.

It was these ceremonious, preparatory gestures that television could hardly capture for the global audience, but the sight of which we in the audience certainly lapped up. They prepared you for the entrance of the players, modern-day gladiators getting ready for battle.

Dimitrov, boyfriend of French Open champion and highest-paid woman athlete Maria Sharapova, looked much younger in person, and handsomer, too. Called the “baby Fed,” given how his play and strokes are similar to those of Roger Federer, Dimitrov showed a one-hand backhand, which we loved to watch.

We stayed on to see Jo-Wilfed Tsonga fight a close match against Jurgen Melzer.

However, other than watching the matches on opening day, we were eager to roam the grounds and to soak in the atmosphere of Wimbledon. We had to pose by the giant image of Andy Murray holding up the Wimbledon trophy of 2013.

A BBC documentary on Murray, which ran in preparation for the opening of Wimbledon, recalled how the first British champion of Wimbledon in more than 70 years went back to the All-England Club a few days after he won the championship. With the grounds deserted and silent, he stayed to relish the moment, and took a video of the Centre Court. It was as if he could hardly believe that he had made history.

Murray was not as successful this year. Far from it. He lost to Dimitrov and didn’t even make it to the finals.

We watched the rest of Wimbledon back in Manila. Federer lost a hard-fought championship. My friends have yet to move on from that.

And I have yet to move on from my day in Wimbledon.