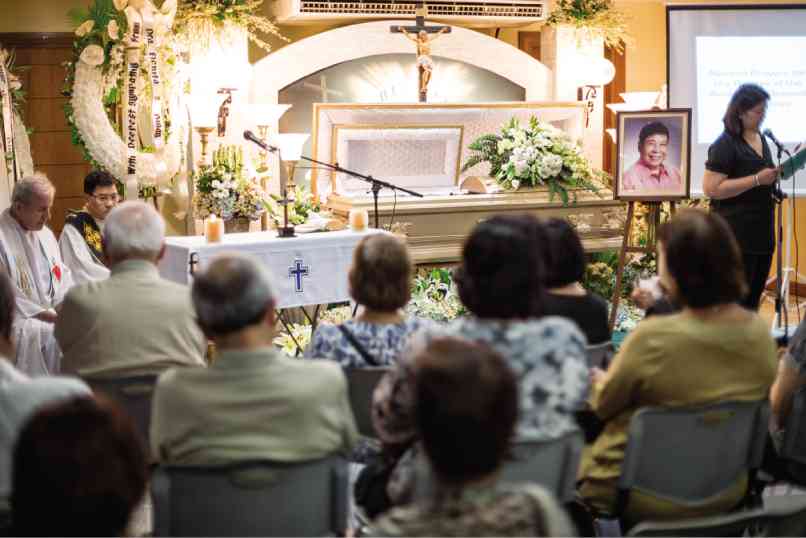 Yves Saint Laurent on Aureo Alonzo: Here’s a man who knows his business

He may have left behind countless beautiful gowns and dresses, but veteran fashion designer Aureo Alonzo didn’t produce even a single booklet to chronicle his long, illustrious career that spanned more than 50 years. It began in the late 1950s in a modest shop on Oroquieta Street in Sta. Cruz, Manila.

Once dubbed by lifestyle media as the “prince of Philippine haute couture,” the Navotas City native died of hypovolemic shock due to gastrointestinal bleeding Monday after being confined for two weeks at the Makati Medical Center (MMC). He would have turned 86 on July 19.

The once energetic designer was diagnosed with stomach cancer soon after he was rushed to the same hospital in February 2013. He had also been undergoing regular dialysis.

His earlier confinement, to use fashion-show parlance, was like a dress rehearsal of sorts for his final losing battle. Alonzo was declared “dead on arrival” when staff rushed him to MMC’s emergency ward in 2013.

“Had he arrived five to 10 minutes later, said one of his doctors, it would have been too late,” said designer and good friend Erik Santos, one of Alonzo’s many protégées. “They were able to revive him. But we noticed that he considerably slowed down after his release from the hospital.”

Who was this man known for his quick smile and, according to former associates, an acerbic wit, whom generations of models and employees fondly called “Tatang?”

He might have been generous to a fault, opening his home and even sharing his trade secrets with younger colleagues, said Santos, but when it came to work, no one in his Malate atelier dared disregard his orders.

“If you did, lagot ka (you’re done for),” said Santos during Alonzo’s wake Tuesday night at Funeraria Paz in Parañaque. “He’d give you a thorough dressing down. He would even knock over a mannequin in front of you in his anger.”

In the 20 years she worked as secretary to Alonzo, Amy Lamena never once heard her boss say cuss words or lay a hand on his employees. But he wasn’t above making his feelings known by chiding you with loaded remarks.

“For instance, when one of our sewers returned to work after being sick for a long time, Tatang saw her and said ‘O, buhay ka pa pala’ (hey, you’re still alive),” said Lamena. “He wasn’t being sarcastic. It was just his way of saying that you should take care of yourself so you wouldn’t get sick.”

Since Alonzo was like a father to Lamena, they would have their regular father-daughter fights in his Malate shop, which doubled as the designer’s residence. From Sta. Cruz, Alonzo moved to an ornate two-story structure in what was considered Manila’s bohemian district in the early ’70s.

“I had a love-hate relationship with him,” she said. “I’d always leave the scene fuming mad only to be told by the maid later that Tatang was laughing behind my back. He just loved to engage, even tease you, but he never took those verbal exchanges seriously.”

“I guess he just loved to tease and poke fun at people close to him,” he said. “But I would miss his generosity. He treated his staff like family. I used to share meals with him on his dining table in the main house.”

After a long, drawn-out legal battle, the bank foreclosed on Alonzo’s mortgaged Malate property sometime this year, leaving him penniless and with no choice but to seek Ping Valencia and Frannie Jacinto’s help. His two former models facilitated his stay a few weeks ago at Sta. Maria Josefa Home for the Aged, a nursing home in Pasay City run by Spanish nuns.

“When it came to his finances, that’s one subject I’m not in a position to comment on,” said Lamena.

Alonzo never stopped working. Less than a week before he was rushed to MMC on June 23 after experiencing breathing problems, he accepted what was to be his final piece from relative Linda Tanjangco.

“I ended up doing the piece based on a rudimentary sketch he did of a draped red dress to be worn to a wedding,” said Santos. “His loyal clients still went to him even though they knew he was already sick and under the care of nuns. That was how much they loved and trusted Tatang.”

Apart from being the only Filipino designer to win the prestigious Camel Award in Cervinia, Italy, in 1975, Alonzo took great pride in the thought that no less than the late great Yves Saint Laurent, one of the tilt’s judges that year, reportedly said upon seeing the Filipino’s work up close: “Here’s a man who knows his business.”

What made Alonzo’s victory sweeter was the fact that he was the only Asian among a tough field of nine European rivals. His eye for detail and mastery of intricate beadwork didn’t escape the attention of seasoned jurors.

It was said to be an exacting competition where contestants cut, sewed and cleaned up an entire dress right before the judges, who went through each entry and inspected them one by one, inside out, in search of possible flaws.

And the victory was Alonzo’s alone to savor, as he had no runners-up to share the stage and the $1,500 cash prize with.

Valencia, then one the Philippines’ top models and one of Alonzo’s good friends, who would help foot his mounting hospital bills much later, flew to Europe to model Alonzo’s creation during the night of the competition.

In December of that year, the Premio Internationale Cavalieri della Nouva Europa was given to Alonzo at the Palazzo Barberini in Rome.

The award effectively made him knight of the “New Europe.” Just as his Camel Award opened doors for him here and abroad, the knighthood led to more shows in succeeding years in Europe, attended by the likes of England’s Queen Elizabeth II and Princess Margaret, who, for a time, became one of Alonzo’s customers.

In 1977, Alonzo also presented his fashion collection before the Shah of Iran and his Empress Farah Diba. Belgium’s Queen Fabiola also attended one of his shows in Brussels.

During his heyday, he was known for his lovely and painstaking beadwork that formed eye-catching patterns that gradated in sizes and colors. He regularly did the gowns and terno of first ladies and high-society fixtures, from Imelda Marcos to Gretchen Cojuangco, Ming Ramos to then President Corazon Aquino.

A Marian devotee, Alonzo also created some of the gowns worn by the country’s famous Virgin Mary images.

“Using Swarovski crystals has become standard nowadays,” said Santos. “If they only knew that long before it became in fashion, Tatang was already generously using Swarovski in various shapes and colors. Galit siya sa Swarovski!”

Almost nothing is known about Alonzo’s early education and training as a designer. His immediate family members composed of younger sister Nene Cruz and her daughter Cory Unas declined to be interviewed for this story.

Unas, the family’s spokesperson, was still smarting over a newspaper report (not the Philippine Daily Inquirer) saying that Alonzo died alone with only a nurse and caregiver by his side.

She then directed this reporter to go to an online report filed by GMA News where she gave the family’s “final statement on the issue.”

“That earlier report was totally false,” said Unas. “I, my mother Nene and my father Cesar was with him (Alonzo) in the hospital. He was lucid until the very end. He didn’t slip into a coma. He just closed his eyes before breathing his last.”

Cruz and the designer’s other sister Ester Alonzo, a retired nurse, reportedly pooled their resources to pay for Alonzo’s wake. They also reportedly paid for his regular dialysis.

From interviews we pieced together from other family members and Alonzo’s former staff, the designer was fifth in a brood of 11 children (one died young) of Domingo Alonzo Sr. and the former Sixta Roldan.

Except for Alonzo, none of them pursued a career in fashion. Ester became a nurse, another sister became a beautician, one more toured the world as part of the Bayanihan Dancers, and a brother became a pilot and ranking officer of the Philippine Air Force.

“They weren’t really rich, but they weren’t dirt-poor either,” said a distant relative who declined to be identified. “Lola Sixta was widowed early.”

The same relative had vivid recollections as a child of being dressed up by Alonzo during those yearly neighborhood Santacruzan.

“If I’m not mistaken, Tito (Alonzo) started dressing up his sisters long before he became a professional designer,” said the relative. “Not too many people know it, but he also loved doing women’s hair.”

There was a time, said Lamena, when Alonzo and his team would do bridal packages, which included “hair couture” and gowns for the bride and her female entourage. He stopped in 2000 by closing his “exclusive” beauty parlor to focus purely on clothes.

“I don’t remember him sharing stories about his mentors in the business,” said Santos. “But he did share stories with me of the time he started cutting and sewing his sisters’ dresses just for fun. He was, I think, only 11 years old back then.”

Like Lamena, Santos also declined to discuss in detail Alonzo’s financial woes, but he admitted what was obvious for everyone to see. His mentor spent most of his spare time, he said, attending Marian events and going on pilgrimages.

“I guess it would have been better had Tatang lived with a partner,” he said. “Who knows? That person would have probably helped him manage his business and finances better.”