Ending the cycle of life... on a tricycle | Lifestyle.INQ ❮ ❯ 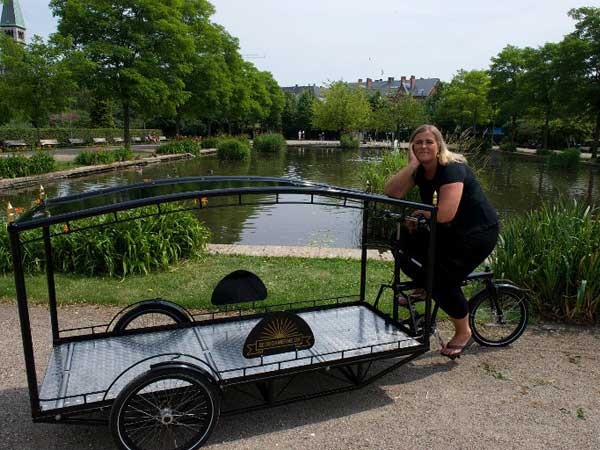 Handout photo released by Sille Kongstad showing herself as she poses with a self-made vehicle for her tricycle hearse service on July 7, 2014 in Copenhagen, Denmark. The Danish undertaker unveiled her contraption drawing praise from bicycle enthusiasts but also criticism from those who believe a person's final journey should be taken by car. AFP PHOTO / Bededamerne.dk / VAGN HANSEN

Ending the cycle of life… on a tricycle

COPENHAGEN — Shuffling off this mortal coil in many countries means making a final trip to burial or cremation in a motorized hearse.

But in Denmark — a country famous for its pedaling lifestyle — the recently deceased now have the option of being seen off on a tricycle.

The contraption, built by a Danish undertaker, has been hailed by cycling enthusiasts in this Nordic nation — but also hit by criticism from those who believe a person’s exit is more dignified by car.

“I got the idea from looking at some pictures of old horse-drawn carriages used in the olden days to transport coffins, and I thought they were very beautiful and feminine,” Sille Kongstad told AFP.

“A lot of families that contact me are concerned about the environment, and it’s important for them to have a sustainable coffin or urn, and it was good to be able to offer them an environmentally friendly mode of transport,” she added.

In two days Kongstad has received five bookings for the new vehicle, which cost over 40,000 kroner ($7,300, 5,400 euros) to make, with many more customers “who are still alive” contacting her to enquire about using it in the future.

The first funeral, on July 19, will be for a 95-year-old man who “loved to have big happenings in his life.”

“The family thought this was a really nice way to say farewell. There will be saxophone music played afterwards and his own saxophone will be placed on the coffin,” Kongstad said.

Long considered one of Europe’s two “bicycle capitals” along with Amsterdam, Copenhagen counts more bicycles than people, and 36 percent of those who work or study in the Danish city use a bike for their daily commute.

Yet the novel design has drawn mixed reactions from Danish Facebook users, with some describing it as an undignified way to go, while others worried that it might scare children.

Kongstad said there was little difference between putting a coffin on display in a car or on a tricycle, adding that children generally had fewer fears and hangups over death than their parents did.

“In general, I think people in Denmark and elsewhere should try to be more open about death and dying,” she said.

“It’s the most natural thing in this world, the fact that we’re going to die. It’s the only thing we can be sure of,” she added.