Criticism in the City of Pines | Inquirer Lifestyle ❮ ❯ 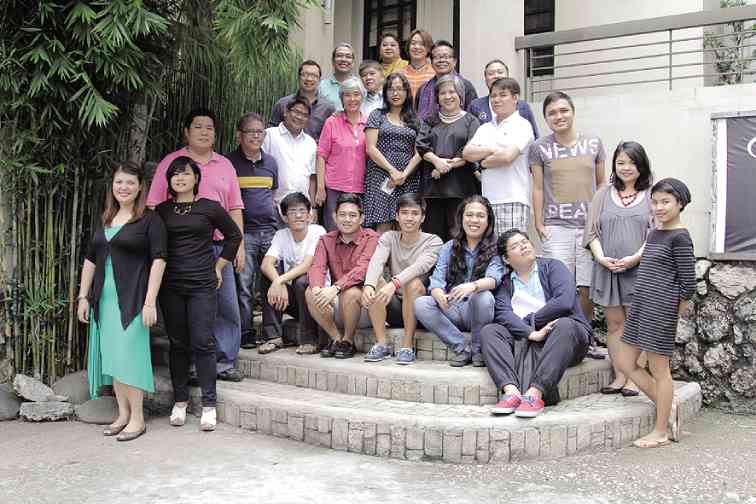 FELLOWS and panelists of the 6th J. Elizalde Navarro (JEN) National Workshop in Criticism on the Arts and Humanities at Colione Hotel in Baguio City. Priscelina Patajo-Legasto (apex) and Oscar Campomanes (top row, right, in glasses) are workshop directors.

Criticism in the City of Pines

What am I doing here?

This question lit in my head like a broken, blinking traffic light; at that time, I was forcing myself to chew on fried chicken during our first ever Fellowship lunch at Max’s Restaurant in Hacienda Luisita, Tarlac.

I was surrounded by people I either had never met or only heard of/read. Not only was I surrounded by literary/critical giants, but I also was supposed to eat with them.

I have to admit, that first lunch was a painful affair—most of the fellows were too timid to admit their hunger (hence, most opted to eat bird food-like proportions), the conversations were a bit strained, and a good number of us were pretending to be busy with our mobile phones. I think I barely had beyond five spoonfuls of chicken, despite the travel-induced hunger.

This was how our fellowship to the 6th J. Elizalde Navarro (JEN) National Workshop in Criticism on the Arts and Humanities started. It has been held annually in the writers’ ultimate

haunt, Baguio City, which we were on our way to during that pit stop. Affectionately known as JEN, the workshop has successfully maintained its goal to nurture a fresh batch of young critics every year to promote criticism in the arts and humanities, which many consider to be a dying field in the country.

Yes, these were the people I was eating with—and to make it more exciting, I had nine other fellows with me: Kristian Sendon Cordero, Cheeno Marlo Sayuno, Rogelio Braga, Jika Regala, Francis Luis Torres, J. Miguel Quizon, Juan Carlos Santos, April Joy Jasmin, Paulo Tenchavez; and two other fellows who we would meet up in Baguio—Paula Pamintuan-Riva and Ivan Emil Labayne.

During some of the prolific silences at that lunch, I looked around our table and tried to predict how the dynamic will be among us for the rest of the week. Unfortunately, the only prediction I made was who would Instagram the workshop activities the most from the kinds of phones they were all busily texting away with.

Critics, one and all

I do have reservations when I hear hotels call themselves “bed and breakfast” (uhh, hotel horror stories, anyone?); however, Colione Bed and Breakfast proved me wrong. This quaint house along Easter Road has been the home of the JEN Workshop for the past five years. And home it truly was. There were areas we could both eat and work at the same time, a bar where we begged for coffee until the wee hours of the morning, and those thick fluffy couches you could get lost in.

The rooms were spacious, the towels were folded in a unique pattern every day (our room had towels shaped like flowers), and it had the most important commodity in a cold city: hot

From the onset, we fellows were told what we must do: We needed to be ready physically, mentally and emotionally. We had to be prepared every morning before 9 a.m. so that we had time to take our breakfast and settle ourselves before we sat in the conference room for the rest of the day; we had to read every manuscript that we fellows submitted and be able to give constructive comments when called for it; and we had to foster an open mind because some of the critiques would hurt—and yes, hurt they often did, but this was part of the process and we swallowed all of these because we wanted to learn.

It wasn’t all work, though. We had plenty of time to play. Our free time came late afternoon or at night, and we randomly roamed Session Road and checked out the night market, or stayed in to watch a movie from Jika’s unbelievable stash of classic Filipino flicks.

There was a lot of socialization, and we really had no choice but to socialize since we were all in one house. Big Brother house, I once remarked, and the other fellows nodded in agreement.

Even if our schedule sounded tiring, no one was ever tired—the lectures, discussions, sessions, and even conversations were all so stimulating and interesting that despite the four hours of sleep we had every day, we were all still alert and alive the next day.

How could we not be enthused with the diversity of topics that were laid out for us? We conferred about war photographs, sensing the city of Manila, the bayot, Moro narratives, feminism in love letters, tinikling, airports, animals and so much more.

Then, we had the book launch for the JEN anthology, “Kritik/Critique: Essays from the J. Elizalde Navarro National Workshop in Criticism of the Arts and the Humanities, 2009-2012,” and a special field trip to the Tam-awan Village and BenCab Museum. In the little time that we spent in the City of Pines, we accomplished a lot and in doing so, became comfortable with our role as critics in society.

Critical of our time

So, what was I doing there?

This question does not only pertain to the time we spent in Baguio; it also asks how, as critics, we function in society. The answer to this query appeared in small puzzle pieces as the week

unfolded. Once, it came through Delfin Tolentino’s lecture when he said that we should “write with our accents.” It also came when we were all participating in a traditional Mountain Province community dance. But I think the puzzle revealed itself whole when we found ourselves back in the same Max’s Restaurant for our last lunch together. This time, we were all wolfing down our food, trading inside jokes, and laughing out loud. It felt like a celebration of the workshop’s success and the friendships that were formed.

As I looked around that table for the last time and saw now-familiar faces surrounding me, I realized what JEN has accomplished since 2009. Organized year in and year out by the Varsitarian, the student organ of the University of Santo Tomas which counts National Artist for the Visual Arts J. Elizalde Navarro  as one of its illustrious alumni in the arts and letters, the JEN Workshop has consistently created this fellowship of scholars who believe that criticism matters and it matters because it changes paradigms and corrects misconceptions in society. With what I learned through this fellowship, I am now more confident of my place as a critic and of my ability to do more for society through writing.

The question now is not about what I was doing there; instead, it is, What can I do for others?

For the past six years, JEN Workshop has been effectively answering this question little-by-little through the consciousness of young critics’ minds.