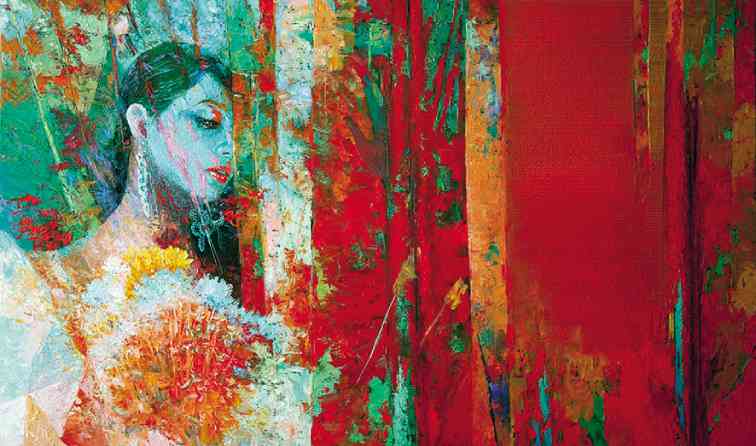 Carlo Magno tackles the passing of time in new exhibit

Time is an abstract concept. We use it to measure the distances between events—in the past, present and future—as a sort of container of sequences.

Count on an abstractionist to tackle such a challenging subject.  But Carlo Magno, one of country’s most prominent abstractionists, is up for that challenge.

An ideologue and philosopher, Magno uses his canvases as a visual commentary on the shifting and ungraspable nature of time for his upcoming show at SM Megamall’s Art Center.

Entitled “Time Passages,” the exhibition is organized by Galerie Francesca and will be on display  July 11-27, with an opening reception on July 17, 6:30 p.m.

Magno has built a visual arts practice on the back of a deep oeuvre of high-quality works. In his three-decade career, he  has built a reputation for experimentation, creating works that reveal a complex artistic temperament with the technical skills to work with a diverse range of media, styles, and forms.

The artist’s rich career of over 20 well-received solo shows held locally and abroad is proof that the notion of evolutionary re-invention is the driving force of his practice.

Art critic Cid Reyes noted Magno’s “subtle synthesis of subject and structure… where the precise relationships of geometric shapes constitute the framework.” This attention to form and its relationship to shapes, colors, lines and textures is the hallmark of a Carlo Magno painting.

We see examples of this in some of the works in the exhibition. In the oil painting “An After Thought,” Magno demonstrates the ability to jump between realism and abstraction. The abstract elements seem to blur the figure of the girl, who is dressed in period fashion. This is his visualization of the often hazy aspects of remembrances and the movement of time.

Similar to this is “Cognitive Dissonance I,” a mixed-media work on canvas which introduces the element of texture to the rendering of a comparable scene. The composition is subtle, but the elements paradoxically clash and blend at the same time creating two distinct works within the same painting.

Not one to be satisfied with what is already an enviable career full of milestones, Magno’s latest works show that he is always experimenting, a trait that will eventually see him  with one of the most storied visual art careers in modern Philippine art history.