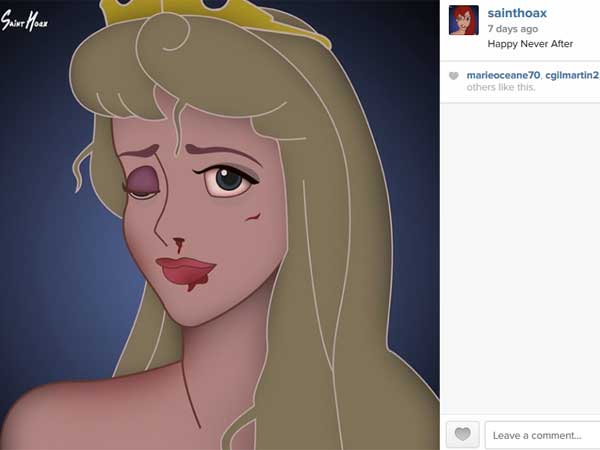 MANILA, Philippines—What happens when a fairy tale turns out to be a traumatic nightmare?

The awareness campaign dubbed “Happy Never After” encourages women to not just sulk and tolerate battery, but to seek help from the authorities to put domestic violence to a stop.

The poster series showed Aladdin’s Princess Jasmine, Little Mermaid’s Ariel, Sleeping Beauty’s Princess Aurora and Cinderella, with a superimposed quote “When did he stop treating you like a princess? It’s never too late to put an end to it.”

“As a Middle Eastern artist, I always have the urge to voice out the injustice and inequality that takes place in my region,” he added.

Based on the artist’s website, Hoax is a “pseudonymous Middle Eastern artist.”

“Infatuated by the element of POP, Hoax works with both tangible and digital mediums to recreate a world based on visual lies. Combining pop art with tyrants and world leaders became Saint Hoax’s signature,” his description added.