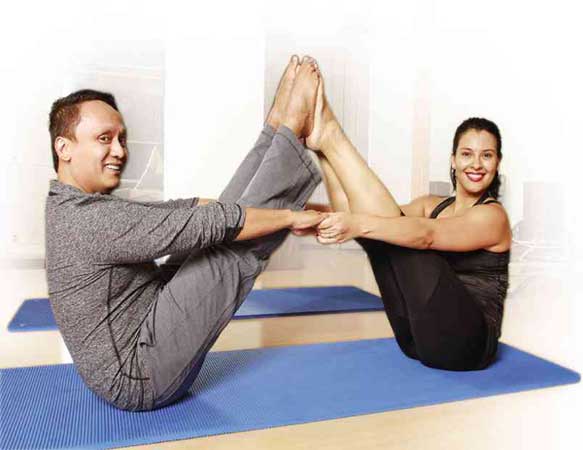 FITNESS guru Olé Eugenio and actress Giselle Töngi do the Pilates-inspired Teaser for the spine and abs.

Why Giselle Töngi loves her workouts

After exhaustive repetitions of lunges, bends, running, squat jumps and planks, actress Giselle Töngi is soaked in sweat, as if she came from a sauna. She doesn’t mind being photographed au naturelle, dripping with perspiration, because exercise is her beauty secret.

After a session of Core HIIT (high-intensity interval training) with fitness guru Florencio “Olé” Eugenio, founder and program director of Options Studio, she declares: “To say that Core HIIT is challenging is an understatement. Olé’s design is tough. After 10 minutes, my heart rate was racing.”

For people in a hurry who can spare only 20 minutes of exercise, HIIT has been scientifically proven to be more effective than your usual workouts. It packs in short stretches of very demanding exercises, combined with gentler movements.

For the average person, a safe routine consists of one minute of vigorous exertion, at about 90 percent of the individual’s maximum heart rate (deduct the age from 220), preceded by a minute of recovery.

The cycle of effort and recovery exercises is repeated at least 10 times, for a basic 20-minute program.

HIIT burns fat by as much as 50 percent more than the average exercise. The New York Times cites a study conducted by  the McMaster

Other studios and gyms offer HIIT or HIIT-based workouts that are sometimes performed mindlessly and result in injuries. Eugenio points out that Options studio focuses on safety and results.

“HIIT is a minute of fast, explosive movements, followed by complete rest or active rest. With Core HITT, we emphasize alignment and core control. The clients are mindful of everything that they do so that they execute them properly,” says Eugenio.

The basic Core HIIT explores all levels of movement—forward, backward, sideways and rotating.

“It involves plyometrics or lengthening the muscles slowly, followed by contractions or fast, shortening of the muscles. As you work against gravity and activate your muscles, you build power. HIIT produces 450 percent more human growth hormones,” says Eugenio. Thus more cellular proteins are generated to increase energy production and oxygen consumption.

“This will keep you young,” says Eugenio.

However, a study by Norwegian University of Science and Technology warns not to overdo any kind of HIIT. Daily sessions are not only strenuous, but the fatigue diminishes the effects of toning muscle and building endurance. Yet NYT quotes studies implying that a few HIIT sessions per week will produce results in less time than the normal time spent at the gym.

While other HIIT programs require the treadmill or bicycle, Core HIIT doesn’t need any equipment.

“If people are intimidated by going to a gym, they can come to the studio and we can modify the exercises. All you need is a mat and to be conscious of your alignment. We recommend Core HIIT for people who have taken up Pilates so they are aware of their body.”

Töngi works out daily, engaging in weight resistance, Zumba, yoga and body-weight exercises. She is motivated by the  energy of the group classes and enjoys the camaraderie.

“Coming here, they identity and articulate what is happening in your body as you do the exercise. As I’m in my mid-30s, I need to be aware of what I’m doing to my body. If not, I could get hurt,” she says. “Olé has put a system into the workout.”

Eugenio explains, “I focus on the deep core muscles, then I work on the superficial muscles that provide movement and support, then the long, strappy muscles for power.”

Töngi feels the high caloric burn even after the session. “It’s like I’m on the verge of passing out. Olé said you have to shock your body to see some changes. Because I work out a lot, my body has adopted to the workouts. I have to do something different to get results.”

When she’s not working out, Töngi is a writer and social media producer for Rappler’s theater and lifestyle beat.

“I wanted to use what I had learned, after graduating from UCLA in New Media Communications, minor in Film and Theater,” she says.

Töngi is also artistic director for Upstart Productions, which was founded by actor Joel Trinidad. She launched the Upstart Soundstage, a series of weekly dramatic theater readings at Century City Mall. While studying at the Lee Strasberg acting school in New York,  Töngi recalls the sessions, in which actors would read scripts by prominent playwrights at a high performance level. Her aim is to make such great literature more accessible to the public.

Meanwhile, her life revolves around her husband, Tim Walters, a cocktail engineer who builds cocktail lists for bars, and her children Sakura, 8, and Kanobi Benjamin, 6.

Asked how exercise helps her balance career and family life, she replies, “Working out is the one thing I do for myself. If not, I neglect myself. It’s my way of giving back to myself. My family understands that it’s nonnegotiable. Mom is going for yoga for 90 minutes,  so no phone calls. That’s her time. They are supportive of that. When I’m not able to work out, I get flustered. I always say that when the mom is happy, the family is happy.”