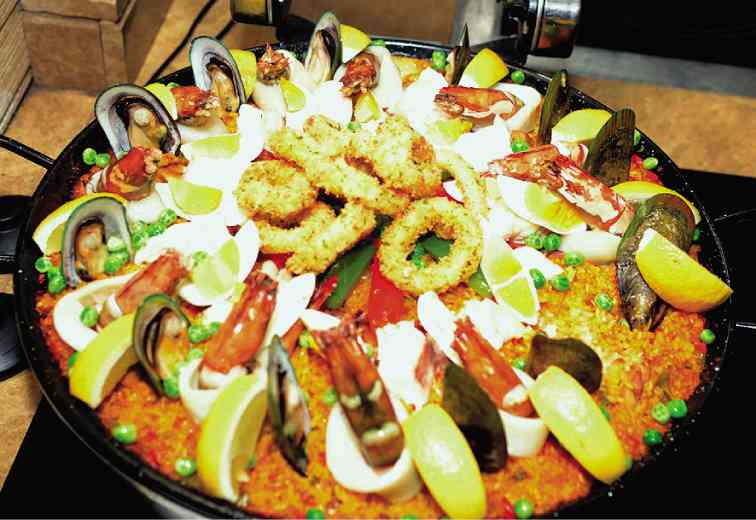 One bite of chef Ainer Ebue’s chicken roll and I was back in my Lola Carlota’s kitchen. In Sta. Cruz, Manila. In 1978.

I could hear her feisty voice, now muffled by time and distance, bellowing orders as my right toe recalled the pleading tongue of her favorite mongrel that lay under the table.

Scientists have proven that the whiff of perfume can trigger vivid memories in people. Food does the same thing to me.

Truth was, I was seated with fellow journalists at Café Ilang Ilang of the Manila Hotel, sampling the Spanish buffet offered every Thursday.

The food critic across the table smiled as I voiced my recollection. “In another time and place, we called this chicken roll galantina,” she remarked.

Those 300 years-plus of Spanish rule played a dominant influence in the Filipino kitchen, and the buffet dubbed “A Taste of Spain” promises “a flavor-filled voyage of remembrance and discovery.”

Other nights, I was told, the buffet would have classic gazpacho de sandia to warm the stomach.

And the pulpo de gallega, or cold octopus salad with potatoes, would probably be interesting.

A wide selection of tapas was also at hand. There were the trusty old gambas al ajillo and empanadillas.

Some hesitated to try the morcilla, or blood sausage. Of course, it was nothing like the local dinuguan. It had a mild smoky taste. Nothing exotic about it, really. Still, the squeamish had to muster courage to try it.

A Spanish buffet would not be complete without paella. The choices were alla Valenciana and negra.

The herb-marinated roast lamb rack was juicy and tasty. The chicken roll that reminded me of my lola had asparagus and bell pepper strips with mushroom gravy on the side.

The callos and the creamy sea bass were also loaded with bell pepper.

There was also cordero asado a la Castellano (lamb) and txangguro, a Basque-style crab casserole.

The pleasant surprise was the langostinos al fino, or prawns in dry sherry and tomato cream sauce. It was both delicious and unpretentious.

Chef Ebue, a Young Chef in the Philippines awardee, had to leave to attend to a family emergency that night, but left word for us to try the olive oil chocolate ice cream with sea salt.

Yes, it still tastes like ice cream but one notices a subtle difference when compared to the run-of-the-mill chocolate variety.

To bolster the Spanish ambience, female wait staff don flamenco dresses and the maître d’ was dressed like a matador.