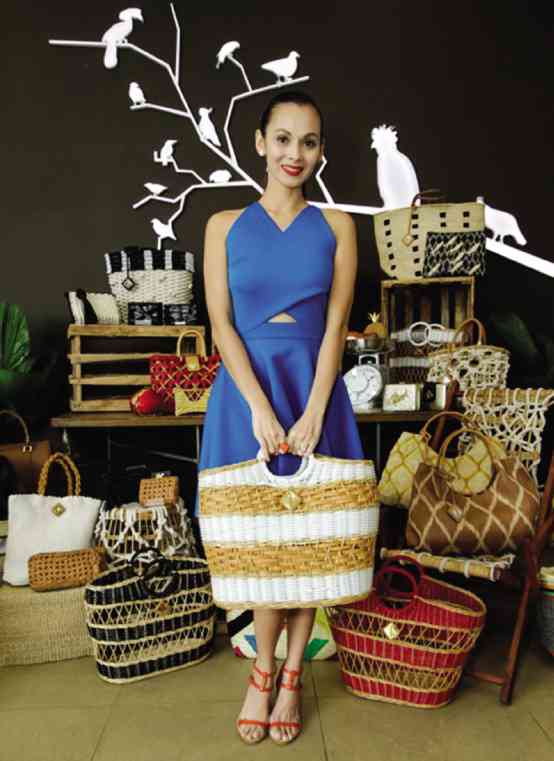 Dubbed “La Boqueria,” the name of a market in Barcelona, the collection teems with woven and artisanal elements such as rope, plastic cords and strips of rattan and leather.

Alunan also picked elements from typical items found in a Philippine market. The collection, which is decidedly ideal for downtime events, has its fair share of pieces inspired by such native fruits as coconuts, mangoes and pineapples.

Her coconut bag, for instance, is literally fashioned from bleached coconut shells and made to look chic by gold-plated hardware. The pineapple bag is made of carved wood, which mimics the fruit’s distinctive skin.

A number of boxy clutches are woven from strips of leather following the classic solihiya pattern. Each clutch is lined with Lucite and comes with a pair of clasps made of white quartz.

Even the tilapia has its special place of honor, as its likeness is embroidered and beaded on ikat fabrics in a number of the featured bags.

Owing to their inspiration, not a few of Alunan’s beach totes are reminiscent of market baskets, including the lowly kaing, or woven bamboo basket used to store mangoes. Since they’re all handmade, no two pieces are exactly alike.

Although the bags are teeming with rustic touches, Alunan managed to make them look chic by combining native materials with more mainstream components like leather, hardware and plastic.

“I’d say many of these bags, especially the totes, are more for weekends,” said Alunan. “But what I really like is how some women use these big bags to the office.”

While visiting London one winter, for example, Alunan was struck by what she saw: a stylish woman in a fur coat, but holding a colorful straw bag. That single element managed to light up an otherwise dreary scene, said Alunan.

“The bag wasn’t even an Aranaz,” she added. “But I love seeing women wear certain bags in the most unexpected places.”

The image also reminded her of a topic she wrote on her fashion column for Inquirer Lifestyle. By “wearing” a chic beach bag to work, you might end up feeling like you just went to the beach even if you were stuck the whole day in a cold air-conditioned office.

The collection will hit all Aranaz branches within the next two to three months before some of them become available to the rest of the world as part of the brand’s resort or cruise offering in January 2015.

Over the past year or so, Alunan and her collaborators have been quietly laying the groundwork for Aranaz bags to penetrate the global market. After joining Manila FAME and a number of product shows abroad, the efforts are starting to bear fruit.

“Before, going international was just a dream,” she said. “Last year, I really made a conscious effort that 2013 will be the start of us slowly going abroad. I made sure that I sat down and made time for it.”

To date, Aranaz is now carried by a number of online stores in the US such as Moda Operandi and Harper’s Bazaar (the American fashion glossy has an online store).

“The first time I received an e-mail from Moda Operandi asking us to send over samples for its online catalog, I had to scream,” Alunan recalled. “Imagine, I’ve been following it for the longest time, and then I was being asked to join.”

In Europe, Aranaz is now found on the shelves of such stores as Wolf & Badger (London) and A Bag With a Story (Belgium). Among the brand’s avid clients are several members of European royalty.

Aranaz bags now have considerable presence in the Middle East, particularly Kuwait, as well as Greece, Hong Kong and a number of five-star resort hotels. New York-based stores such as Latitude and Aha Life also carry the brand.

Of course, exporting bags to the world’s fashion capitals isn’t new to Alunan, who grew up being exposed to the business through the pioneering efforts of her mother. The family has been into women’s bags for 30 years now.

But whereas they used to simply manufacture classic-looking bags based on certain specs for various department stores abroad, this time Alunan is pushing her own brand, which comes with a specific set of stories and aesthetics.

“This time, we’re not being retagged,” said Alunan. “In fact, the stores that carry the brand even promote it. One store in the US describes Aranaz as an expression of ‘the exotic cool chic of Manila.’”

At the same time, Alunan is slowly transforming her Aranaz outlets in the Philippines into lifestyle stores. The main attraction would still be the bags, but in keeping with the cool island lifestyle they represent, other items such as furniture pieces, throw pillows, resort wear and ceramic products would soon become part of the mix.

In fact, the Aranaz store in Greenbelt is now a multibrand store featuring stuff made by various Filipino companies, which export their products abroad. Alunan met their owners while joining Manila FAME.

“Like my bags, everything is handcrafted,” she said. “We wanted a beach lifestyle boutique. We started it just last summer.”

Alunan hopes to eventually design and manufacture some of these products herself. She also wants to revive the family’s heritage of making beautiful ceramic pieces.

Her paternal grandfather, the late Antonio Aranaz, was a pioneer in the manufacture and export of ceramics, she said. The old man sold the company to his brother-in-law, who later renamed it Cardinal Ceramics.

“My dad has been telling me of his desire to buy an oven to do resin pieces,” said Alunan. “If we do it commercially, such pieces, like my bags, are going to be handcrafted, artisanal and very special.”