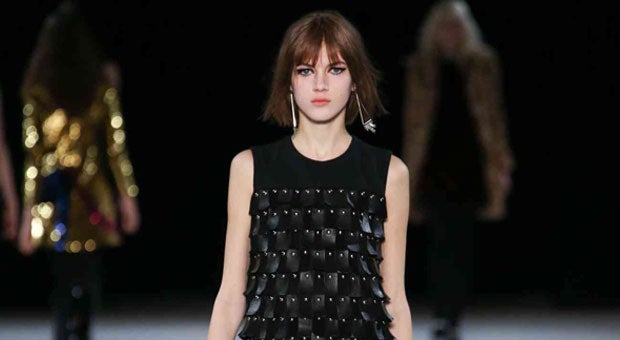 Music, silhouettes and pop emblems from the 1950s and ’60s were among Hedi Slimane’s main sources of inspiration for Saint Laurent’s Fall-Winter ready-to-wear collection for men and women.

Inquirer Lifestyle got to see some of the clothes and accessories up close, including Saint Laurent’s recently launched collection of travel monogram bags, in a recent preview at Saint Laurent’s regional office in Hong Kong.

Contrary to rumors, Slimane isn’t doing away with the iconic YSL logo on women’s bags. Since he became Saint Laurent’s creative director two years ago, the designer changed the name of its premium ready-to-wear line from Yves Saint Laurent to Saint Laurent Paris.

Also known as the Cassandre, the YSL logo resulted from a collaboration between Saint Laurent and the artist Cassandre in 1961.

While most of YSL’s new bags are already available in stores, the Fall-Winter ready-to-wear collection will hit selected boutiques in August.

The ’60s influence was evident in women’s pieces. Meant to be worn with black tights, for instance, short dresses made of such materials as velvet and jacquard have geometric elements and an iconic A-line silhouette reminiscent of the decade.

Aside from layering, Slimane resorted to a juxtaposition of materials and textures to keep the look fresh and exciting.

Subtlety took a backseat to bling, which was apparent in a number of sequined pieces that depicted the paintings of American artist John Baldessari. With a pair of black dresses as his canvas, the homage to Baldessari involved reinterpreting two of his older conceptual artworks. But instead of using paint, Slimane resorted to multicolor sequins and beads to form the artist’s various human figures.

The designer reportedly explored various techniques in beadwork to simulate as closely as possible the artist’s brushstrokes. Each of the two looks inspired by Baldessari is limited to 10 pieces.

In keeping with the “youthquake” theme, several dresses also follow the baby doll silhouette. Some pieces are said to be influenced by the earlier music of singer-songwriter Marianne Faithful. A number of looks are accentuated either with real fur or velvet trimmings.

These short dresses should go well with bright-color, low-heel and sparkly Mary Janes or black knee-high “go-go” boots embellished with studs and other newer forms of metallic accents that didn’t exist in the ’60s.

Slimane’s use of pop culture extended to gun-shaped shoulder bags, clutches and brooches. Skulls and heads of lions have also found their way to Saint Laurent’s men’s accessories, including a number of bracelets and rings.

In lieu of big, wide-brim hats that were everywhere in his debut collection, Slimane chose to scale down the size of his headgear this time around.

Instead, he chose to put more emphasis on his new shoulder bags such as the small and boxy Lulu Bunny, and the versatile and boho-inspired leather drawstring bucket dubbed Emmanuelle.

The Emmanuelle comes in many forms. The regional office, for instance, showcases two permutations: one with fringes and another one embellished with studs.

Slimane also immortalized a blurred version of the YSL logo on the brand’s travel monogram series. Made of printed and coated canvas with leather trims, the series offers globetrotting

As far as men are concerned, Slimane channeled elements from the ’50s to bring out their inner Elvis. He did this by using leather and various forms of tweed, which he fashioned into suits, trench coats and boxy jackets.

Again, he also made layering fun and interesting by using and combining materials in various weaves and makes.

And what’s a Slimane collection without the bling? A few key pieces, for instance, were made of silvery fur and animal prints.

A jacket embellished with green sequins and beads was easily one of the most head-turning looks in the entire collection. It’s definitely one piece the likes of Elton John or the late Liberace won’t have second thoughts about wearing on stage.

But Slimane also has plenty of classic options for more conservative dressers. His “permanent” collection of slim leather jackets, classic trench coats and “smoking” leather pants can be worn season after season.

A number of men’s totes and backpacks were made of red-and-black plaid flannel with leather trims or stamped cowhide leather made to look like exotic croc. Studs and rivets were recurring accents in a number of men’s bags and clutches.

To complete the look, the designer has come out with more than 30 different styles of creepers for men and women. Each pair of footwear is handcrafted and designed to look cool and edgy, thanks to an unlikely juxtaposition of colors, materials and textures.

Saint Laurent is exclusively distributed in the Philippines by Stores Specialists, Inc. Its first store in the country opened recently at G/F, Shangri-La Plaza East Wing.