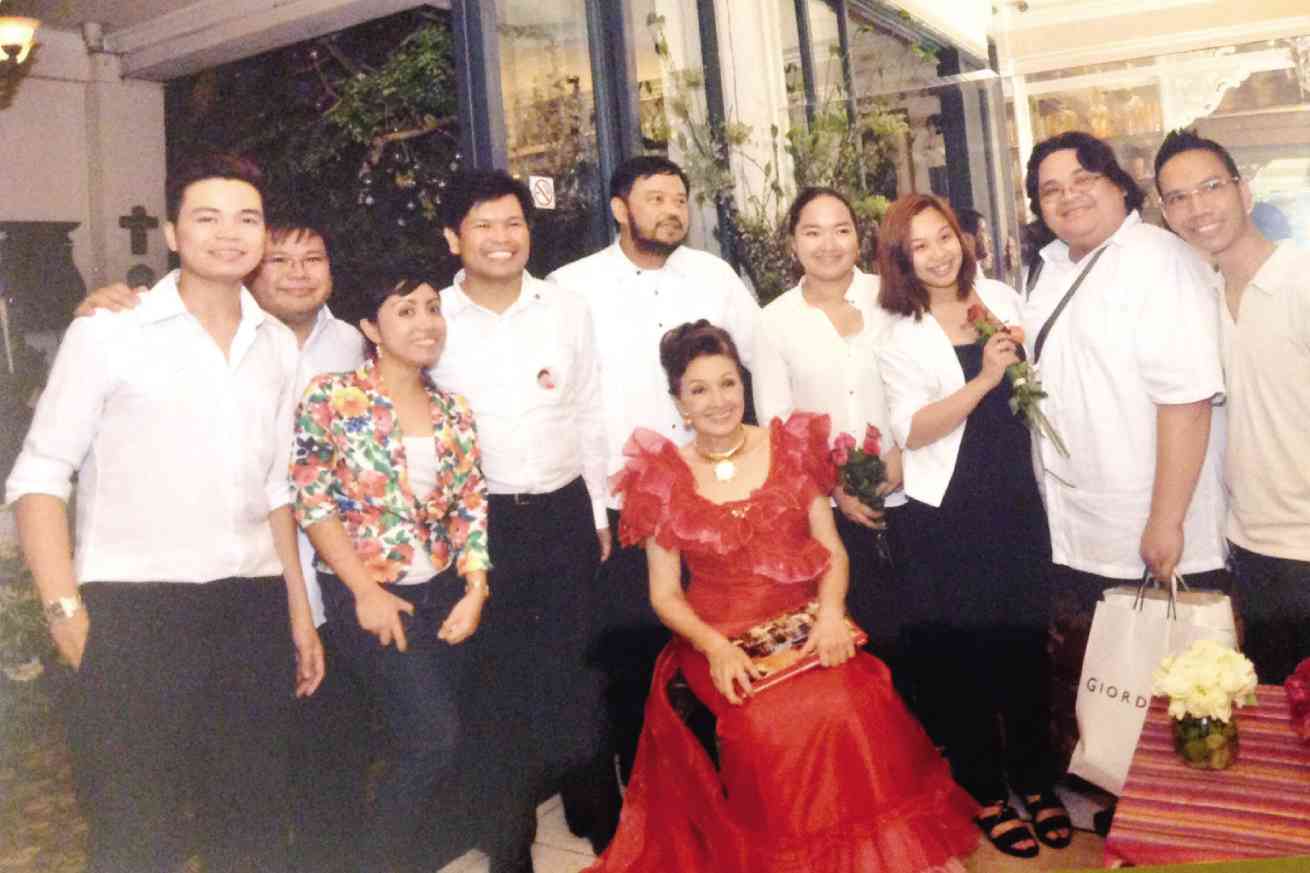 INGRID Sala Santamaria withmembers of theManila Symphony Orchestra at her concert on June 12 in Tondo, Manila

The winter of her career in classical music that Ingrid Sala Santamaria herself refers to has been a truly busy one; it’s been concentrated on preparations for an eternal Spring.

That Spring will mark an ultimate fruition. Even now, Ingrid has already preserved some of her life’s work in three CDs, a package of legacy which will be made available to the nation she has served well.

That by itself represents “the most difficult and challenging” endeavor ever attempted not by her alone, she says, but with conductor Arturo Molina and the Manila Symphony Orchestra. They all had to go through demands of recording made especially rigorous by its urgency.

At any rate, between Feb. 9 and June 12 this year, she has produced and launched all three CDs, packing six major Romantic piano concertos.

“It’s a lot easier to play the concertos live than to record them,” Ingrid says. “Recording has zero tolerance for errors. The venue is crucial, too.” She chose the auditorium of Faith Academy in Cainta, Rizal, where she has often performed. She rates it high for its “excellent acoustics,” indeed for its international standards.

Recently at breakfast with Ingrid at a favorite neighborhood shop, CNN China correspondent Jimmy Florcruz, a friend of Vergel’s, joined us. Told about the 50th anniversary of her musical career, Jimmy, probably curious about the incredibly lovely sight beside him, had to ask her age, prefacing his question with the apologetic “May I?”

Age is the least of her concerns now, except that it somehow explains the urgency with which she does things. To get everybody moving at her own pace, she implores them, “I’m racing against time, not to mention arthritis and dementia.”

But there’s not a hint of either in her live performances—two concertos in a performance where one is the standard. She has in fact 30 stored in her exceptional brain and muscle memory, waiting to be released at her bidding.

Her next performance is scheduled for July 25, starting at 6 p.m., at the Ayala Museum, a favorite venue of ours for the intimacy it offers, not to mention the easy-walking distance from home. The CDs will be available at the concert.

For all the levity and self-deprecation with which she takes it, Ingrid, who had her premier recital at 10 and at 17 had earned her Bachelor of Music degree and proceeded to take advanced studies at Juilliard School in New York, must feel some special burden for her musical genealogy: her own mother, her first piano teacher, Pilar Blanco Sala, was herself taught by Sister Baptista Battig, who came under the tutelage of Ludwig Von Deppe, himself a pupil of Frank Liszt!

Left with a void in her life when husband Joe passed relatively early, although with her four children grown enough, she decided to plunge herself into her art single-mindedly, chiefly with concerts here, there and everywhere, bringing her music to as many audiences as possible.

In her hometown, Cebu, she founded an orchestra development program through the Salvador and Pilar Sala Foundation, which granted scholarships for musicians and eventually produced the Cebu Youth Symphony Orchestra.

She has performed hundreds of educational concerts with professor Reynaldo Reyes for the benefit of the masses. In fact she launched her CD package—on June 12, Independence Day— in the heart of Tondo, in a newly inaugurated Ingrid Sala Santamaria Concert Hall dedicated by some philanthropist-aficionado.

She preserves her memorabilia in two small houses in a modest subdivision in Santa Rosa, Laguna. In one house she has her fairly widely spoken-about Christmas village collection of characters and situations around which Ingrid tells stories enthusiastically; the other house keeps two uprights and the overflow of musical memorabilia from her home in Magallanes—her concert ternos and other gowns, trophies, plaques and other awards.

The two houses make for a sort of legacy home, one especially arranged and cared for as a true lived-in home by a special homemaker. And her CDs complete the legacy.

It’s a beautiful way, indeed, of keeping such things alive and accessible for generations to come, with respect for her God-given talent and gratitude for the long, illustrious career it has inspired.

Now, to cap gratitude, it’s time to give back: The eternal Spring of Ingrid Santamaria is at hand.