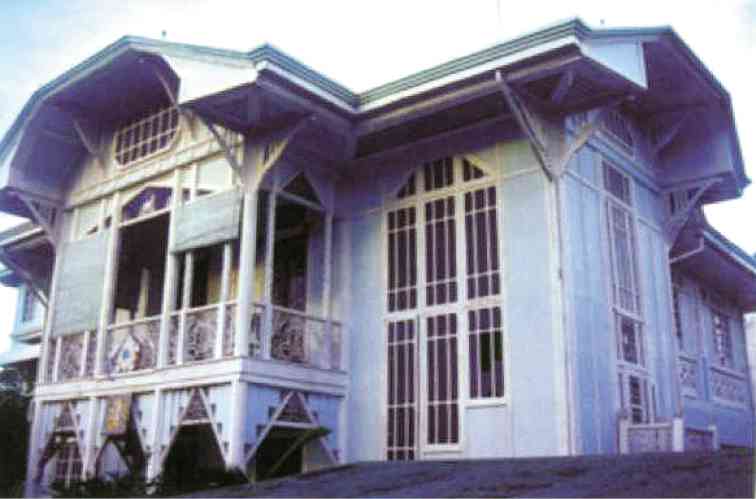 THE FAÇADE of the sky-blue Sabino Santos house is a prime example of American colonial architecture.

Amid climate change and unpredictable weather, one valuable lesson that old houses could teach Filipinos is how their ancestors adapted to situations bereft of creature comforts such as motor transport and electricity.

Whether a humble bahay kubo or a colonial mansion, these structures now lovingly referred to as heritage homes had huge windows designed for ventilation.

Spacious garages were more likely constructed with huge carrozas carrying religious icons in mind, instead of parking for two to three SUVs.

When present-day Pinoys learn to appreciate how these landmarks reflect Filipino culture, originality and resilience, they also begin to understand the persistent efforts of certain private groups who fight tooth-and-nail for the preservation and adaptive reuse of these homes.

By far, this is the first ever guidebook about historical domestic abodes to see print in the country.

While other tomes on Filipino ancient houses have also been released, this new book that will be launched on July 26 is the first that makes an effort to narrate their histories and give similarly minded enthusiasts directions on how to locate and study firsthand each structure.

Laya, whose earlier incarnations include education and culture minister and Central Bank governor, is highly regarded in pedigreed circles for his expertise as an art and antiquities collector and author of books on art, architecture and cultural treasures, among others.

Turalba is an urban and regional planner, environmentalist and professor in the College of Architecture of the University of the Philippines. A specialty scuba diver, she has also written books on Philippine architecture and planning and still finds time to educate local communities on the significance of urban-design skills.

Laya obliged Inquirer Lifestyle with a preview and the inside story on how their trailblazing book came about.

“Visiting old homes gives one an idea of our history and culture—the way of life, things considered useful and/or beautiful, how life might have been for our ancestors, how they adapted to conditions of the time (that is, without) electricity, motor vehicles, telephones, highways,” he said in an e-mail.

“Old houses also teach us how to adapt to our stormy/rainy, humid and earthquake-prone land, to follow a way of life that conserves energy and water and leaves a minimum carbon footprint, the importance of proportion and detail in designing buildings, and the other elements of good tropical architecture,” Laya explained.

He said he hopes the guidebook will encourage more people, especially children, “to visit and learn about Philippine architecture and tangible heritage in general, distinguish between the ugly and beautiful, learn about Filipino architectural achievement, and in the process learn more about our country and people and be prouder of being Filipino.”

Laya, a former chair of the National Commission on Culture and the Arts (NCCA), noted in his travels abroad that European towns, for example, have entire districts of old homes and buildings in admirable states of care and preservation.

“London, Paris, Seville, Amsterdam, etc. are atmospheric and beautiful because the buildings are so evocative of the past, include architectural masterpieces [and] give an idea of the life of olden times,” he said.

Sadly, the Philippines has not exerted the same level of effort in preserving its cultural gems.

People are more likely to hear of stories about unsuccessful attempts to preserve old buildings laden with history and nostalgia from the wrecking ball of unenlightened but moneyed developers who place more value on the real estate where a historical structure stands.

“We have so little of those (heritage buildings) here, little to tell us how learned and cultured our ancestors were, how accomplished craftsmen and artists were in those days, how much we have gained (or lost) since then, what we can be proud of in terms of what Filipinos did in the past and how far they have gone since then,” Laya noted.

He insisted that architecture, though loaded with mathematical formulae, “is an art—at par with music, dance, drama, painting and sculpture, literature, film.”

“We appreciate all the rest, but seem to pay less regard to architecture,” he pointed out.

“Preserving old houses is a step to appreciation of architecture as an art form and hopefully to improvement in our urban landscape [because there are] so many ugly buildings around us,” Laya added.

The NCCA gave a grant to cover photography and other expenditures in exchange for an electronic copy of the book, he said.

Laya pointed out that the Turalba Foundation also covered some costs while Anvil Publishing took care of printing and distribution.

The trio of Laya, Turalba and Tinio spent two years on the project that covers 20 heritage homes scattered throughout Luzon. Laya said there are plans to come out with several other guidebooks to cover similar architectural gems in the Visayas and Mindanao.

Laya and Turalba each selected the houses that they discussed in detail. Their exhaustive architectural descriptions make it easy for one’s imagination to step into these homes and wander about.

In one chapter, the reader could almost “feel” the knife marks on a solid wood table where servants chopped ingredients for meals.

Another portion, explaining how ventanillas of the house of a well-off owner allowed the cool air outside to pour in, felt accompanied by a gentle breeze.

Of course, there are also interesting vignettes (read: tsismis) about the houses’ long-gone residents.

In fact, these anecdotes (that Laya said Tinio provided many) that make the quiet, old houses come alive and steers the guidebook from becoming an impersonal architectural dissertation.

Two sisters who stayed at the Quema House, a bahay-na-bato in Ilocos Sur, caused jaws to drop when they gave away toothpicks made of gold to flabbergasted visitors during their weddings.

Known for ostentatious display during its prime, the Quema House is also known for a steep staircase “to allow the ladies to show off the fine embellishment on the train of their serpentinas (fitted gowns ending in a flare).”

A house in Bulacan features a painting on the ceiling created by Fernando Amorsolo, who did so as a patient showing his gratitude to the healing powers of home owner Dr. Sabino Santos, an EENT specialist.

Casa Candaba in Pampanga tells of the story of a long-suffering wife who discovered a gusi or large jar filled with gold and jewelry. After selling the contents, she gathered her children and left her husband.

Telltale holes dug all over the ground floor remind visitors of the husband’s attempts to look for more treasure.

Casa Jaen in Nueva Ecija still has bullet holes on the outside and inside walls, indicating the political violence that it witnessed back in the day.

Casa Hidalgo, constructed in Quiapo and transported piece by piece to Las Casas Filipinas de Acuzar in Bataan, once accommodated art students taught under its roof by Fabian de la Rosa, Amorsolo and Guillermo Tolentino before the UP School of Fine Arts moved to Padre Faura in Ermita, Manila.

Before the family that owned Casa sold it in the 1970s, rumor has it that it also became a venue for live sex shows.

Laya said Tinio had more juicy stories “but we could risk lawsuits if we included them.” Without mentioning specific houses, he told the story of a girl who died in one and whose ghost could sometimes be seen “suspended from the ceiling.”

Another story is that of an adulterous wife whose love child either died naturally or was strangled to death by her angry husband. “Anyway, the story handed down through generations was that the baby was buried under a staircase and a skeleton was found when they were doing some renovations,” Laya said.

Laya noted that heritage homes included in the guidebook are either open to the public or are accessible via prior arrangement.

While majority of the structures reflected the style of the Spanish colonial period, not all were owned by rich people.

The Apolinario Mabini bahay kubo now permanently settled inside the PUP compound in Sta. Mesa was once owned by a farmer, albeit a wealthy one.

“Not all of our ancestors were of the elite; many or most of them must have been farmers or fishermen, but regretfully the only house we could find of the type is the Apolinario Mabini house which is actually of a well-off farmer,” Laya noted.

“This is a gap that government or an NGO should fill—have house-museums that illustrate how the masses lived in the past, a nipa hut in the fields and a fisherman’s house by the seashore,” he added.

The Rizal Shrine in Calamba and the Aguinaldo Shrine in Kawit were not included since they are almost always in the regular visitor itineraries of tour groups.

“Both also have exhaustive guides prepared by the National Historical Commission of the Philippines, their guardian,” Laya said.

Meanwhile, the Nakpil house in Quiapo should have been included, “but it was not yet open to the public when we were writing the book,” he explained.

There was another old house not included because it was also not open to the public.  Laya surmised the structure “is probably gone by now.”

More than the structure, Laya was apparently touched more by the story behind the house owned by an old spinster who lived alone.

“Her parents refused to have her marry [a] boy [she loved] so he married someone else. She refused to marry the man selected by her parents and remained single,” Laya said. “When her parents died, she inherited a house that was directly across the home of her lost love. That’s where she was living, alone, when we visited,” he added in his e-mailed narration, putting the word “Sigh” at the end of the paragraph.

“Philippine Heritage Homes: A Guidebook” is available at National Bookstore.