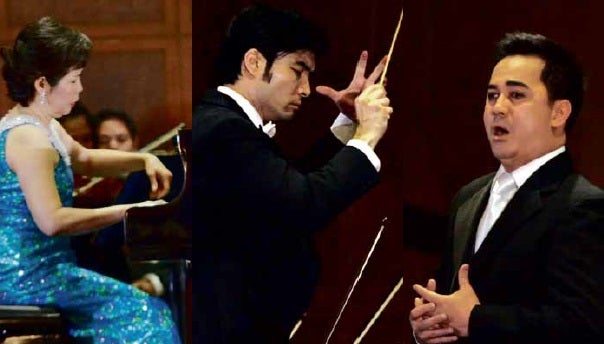 It featured Singapore’s Darrel Ang, who waived his professional fee for the benefit of the foundation and the Habitat for Humanity working for the rehabilitation of Super Typhoon “Yolanda” victims.

The concert was dedicated to the art patron, the late Juan Antonio Lanuza. Baltazar Endriga, chair of the MCOF, said in his message that  Lanuza supported the foundation’s efforts and helped a lot of Filipino artists gain exposure through his column. Endriga said the program included Lanuza’s favorites.

The hall was named after Lanuza following an MCOF resolution which was read by Antonio Marty, president of the Philippine Stock Condominium Corporation.

Espiritu, fresh from his European operatic stint, opened the program with a spirited rendition of “Misero! O Sogno, o Son Desto,” a challenging concert aria. He displayed the lyrical sheen of his voice which towered over the dryness of the hall.

His coloring was arresting. It was laced with convincing expressiveness of different moods of a man imploring the breeze to contact his lover.

There was solid rapport between him and the conductor. With the audience’s thunderous applause at the end of the long aria, Espiritu and Ang had set the mood for glorious listening.

In Beethoven’s “Eroica,” Ang wielded his baton with supreme authority. It sounded fresh and with a shimmering elegance, all expressed in buoyant tones.

The contrasting moods of the two themes of the first movement were strikingly drawn out, including the extended coda. The funeral march of the second movement brought to mind the devastation brought about by Yolanda, which was soon erased by the playfulness of the third movement.

The orchestra capped the  work with a splendid reading of the fourth movement, a rich set of variations that included an absorbing fugue that the orchestra played with meticulous attention to details.

Maestro Ang is for keeps. He should be watched more often in Manila!

In the succeeding piano concerto, the happy A Major K. 488, Coyiuto essayed an unhurried pace. She cut a confident and regal presence as she entered the stage and sat coolly on the piano.

As soon as the orchestra had done the introduction, she played her part with a striking brilliance. She had amply shown her caliber in the first movement, which  included a catchy cadenza.

She intoned a pensive aria in the second movement, and carried on an eloquent dialogue with the orchestra. She showed her mettle in the third movement with an exacting finger work that brought out Mozart’s essential verve.

Ang’s command of the orchestra secured a cordial tandem with Coyiuto. She played on a brilliant, brand-new Ed Seiler piano, courtesy of Lyric Piano and Organ Corporation, which is celebrating its golden anniversary this year.

More of Mozart’s zest was fired by tenor Espiritu, who capped the evening with an exhilarating rendition of “Se Voui Che Te Raccolgano,” an aria from the opera “Il Sogno di Sciopione.” Here the young tenor was more projected, dishing out florid passages and demanding trills as his vocal instrument ascended and descended the low and high registers.

The text drove home the point—Heaven does not reward indifference to other persons’ sufferings—which truly spelled out the humanitarian goal of the concert.