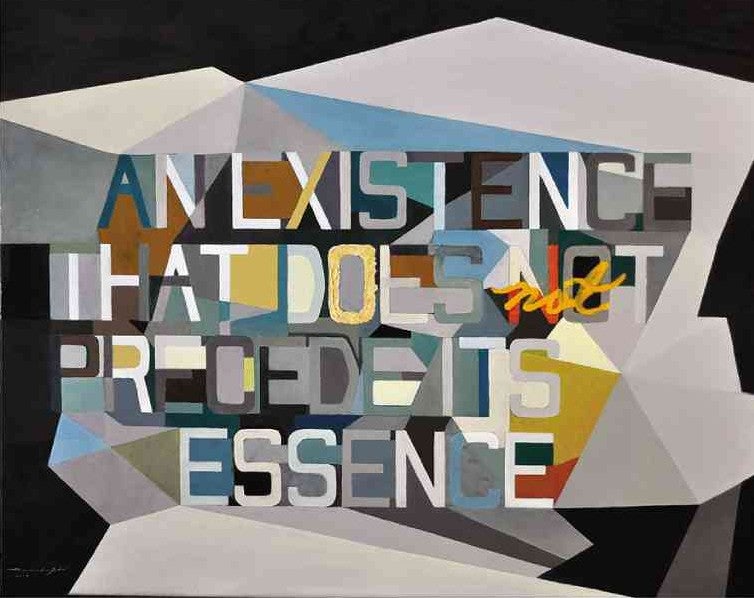 He possesses a quicksilver mind, grasping immediate thoughts that leap into other areas of concerns, by turns affirming and, while not denying, shading an idea with other previously unconceived ideas.

Determinedly an artist, he is as adept and sensitive to language whose poetry—imagine that!—impels the reader not only to read between the lines, but also between pauses and silences, where words are whipped into a veritable visual calligraphy.

The range of his ruminations can be delivered as a kind of self-interview, a confessional of unscripted dreams, desires and dilemmas that will find resolution when, after assuming their physical fulfillment, they are installed as memory, light, illusion.

When the late Roberto Chabet described his art as more properly the workings of the mind of an art critic, it spawned generations of young Filipino artists whose endeavors not only transcend, but even despise, easy pleasant-viewing aesthetics, the Muzak (an equivalent of elevator music) of contemporary artmaking.

One such progeny might be Marc Gaba, whose recent works are on view at Altro  Mondo Gallery. It is billed as “Click: Paintings,” certainly more emotionally composed and contained when viewed against a “retrospective” of Gaba’s works.

Still, the show, at least for this viewer, is enriched and enlightened by echoes of the artist’s past works that keep his present works in abiding focus and place them in a better perspective.

Gaba’s photographs of garbage in city streets, for instance, unreservedly compel us  to stand in the junction between what revulsion and seduction, as the images devour us even as they remind us of all the regurgitated matter which we have disgustedly consumed and now have expelled.

With a little effort, we can imbue the trash photographs with the dignity and nobility of a Morandi still life. A Magritte-like image in  “Bark (Dog Series)” is a collage painting of a desolate mountain scene illuminated from on high by a floating light bulb.

In “Back to Sender,” we are presented with a skull-shaped mass (in resin) pasted all over with vintage stamps of the world’s state leaders whose hands determine their fate on our lives. (The sender might have been Damien Hirst, whose diamond-encrusted skull sent the auction houses into stratospheric madness.)

In his artist’s statement, Gaba writes: “All my paintings are composed as poems. I have written poems as visual art; I make paintings as poems.”

Thus the “Page” works that incorporate words and statements, which are a configuration of shapes and forms that alter the neutrality of a painting. Placed in the center of the space, the words emerge like pentimenti disrupting a viewer’s pure visual approach to the painting while the words clamor for both space and meaning in our mind.

Much like the visual and mental conundrum in the works of Jasper Johns where the stenciled letters spelled “Red” is painted in blue. Or, for that matter, Magritte’s depiction of a pipe superimposed with the words (translated into English): This is not a pipe. What the eye sees is not what the mind grasps.

In the work emblazoned with the word “Manila,” the city is codified as either a series of alternating visuals and consonants that makes sense only as an utterance, or, as the word persists, entrenched, in the crevasses of the mind, spark images and emotions, depending on your level of affection or disgust for the city.

More disorienting is the work with the word “Applause,” inverted, further diminishing the recognizability of the word, indeed, reducing it to a mirage. While always intellectually engaging the viewer to ponder the riddle of Gaba’s  sphinx, stirring his curiosity, the works can be relished for their purely optical suavity.

Under the spell of American artists Agnes Martin and Frank Stella are Gaba’s own stripe paintings.

Martin is revered for her spare, square, uncluttered canvases composed of the ruthless horizontality of lines rendered in sheerest graphite. All are spiritually uplifting, for they are, in the artist’s own words, “not about what is seen. They are about what is forever in the mind.”

Stella startled the art scene in the ’60s, above the din and roar of Ab-Ex and Pop Art, with his princely “Black Stripe” paintings. Stella has since explored the shaped painting, which has also inspired Gaba, and, in later years, harnessed technology, the computer, into his works.

The “Pure Relation” paintings on paper are Gaba’s deliberate exploration of how a shape demands a particular color, and vice-versa. Not only do form and color counterpoint each other’s dictate, they also resolve what started as an internal conflict leading to each other’s obliteration, into a harmonious organic and geometric relationship.

He once destroyed a painting for the sheer purpose, and joy, of consigning it to memory.