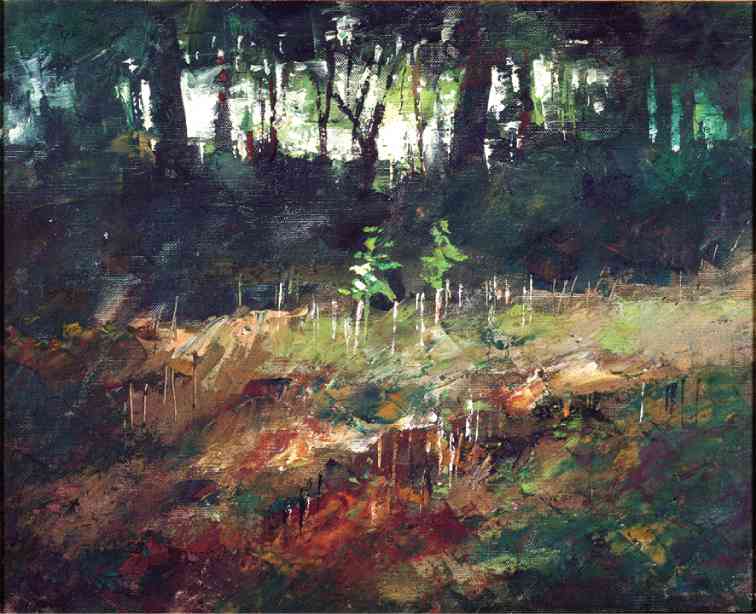 Today Romulo Olazo celebrates his 80th birthday. He is one more preeminent Filipino artist whose name has been floated for decades for selection of National Artist for the Visual Arts.

Many believe Olazo has long been ripe for the Order of National Artists, but the man just laughs off the rumors.

“I don’t go out often these days, so I never hear the rumors,” he says.

When told that his son Jonathan, a multimedia avant-gardist and the youngest to have received the Thirteen Artists Award from the Cultural Center of the Philippines, may yet be up for the next generation of National Artists after him—this he laughs off even more (though one can detect the pride and delight in that laughter that almost resembles a giggle).

On July 23, a coffee-table book on his life’s work will be launched on the ground-floor lobby of Ayala Museum at Makati Ave. cor. De la Rosa St., Greenbelt Park, Makati City.

With nearly 400 pages, it comprises 730 plates, more than half of which his signature “Diaphanous” abstraction and its variants, the rest graphic and figurative works; with essays by art critics Alice Guillermo and Cid Reyes, publisher John Valenzuela, CCP’s Ma. Victoria Herrera, wife Patricia and son Jonathan.

Published by Paseo Gallery, the book aims to “trace the development and achievements of Olazo over the past 40 years as well as define his place on the Philippine art scene, especially in the field of abstraction.” It reportedly took almost four years to produce.

About 15 artworks featured in the book, borrowed from corporate and individual collectors, will be exhibited at the museum’s ArtistSpace until Aug. 4.

Born in Balayan, Batangas, Olazo graduated from University of Santo Tomas, where he was mentored by National Artist Victorio Edades and Diosdado Lorenzo. National Artist Ang Kiukok was his classmate.

He belongs to the second generation of Filipino modernists. He started as a komiks illustrator, became known as a printmaker, until he found his niche in abstraction with the “Diaphanous” series of paintings.

On his first solo show, in 1974, he displayed his silkscreen process. That year, he also held his second solo show, of prints and “Diaphanous” paintings. Most recently, he exhibited the latest development of the “Diaphanous” series—in black and white, sometimes tinged with blue or brown.

This signature abstraction is often monochromatic and looks like overlapping images from a film negative. Its two most recognizable figures are the anthurium and the kasuy in X-ray form.

The layering of forms and repetition of lines are of such delicacy and subtlety one can only describe it as ethereal—a visual quality resembling National Artist Vicente Manansala’s transparent cubism and Fernando Zobel’s “Saeta” series.

Olazo had had a pacemaker implanted and a heart-bypass operation some years ago, but he says he’s still working almost every day, at 2-5 pm, “if I’m not sick.” He has finished about 20 pieces, enough for a new exhibit.

Doesn’t the fume of paint pose any danger to his heart condition?

At this venerable age, he is still working on his “Diaphanous” and “Permutation” series, in varying scales, color tonalities, or a combination of both, like a musician working on variations on the same theme.