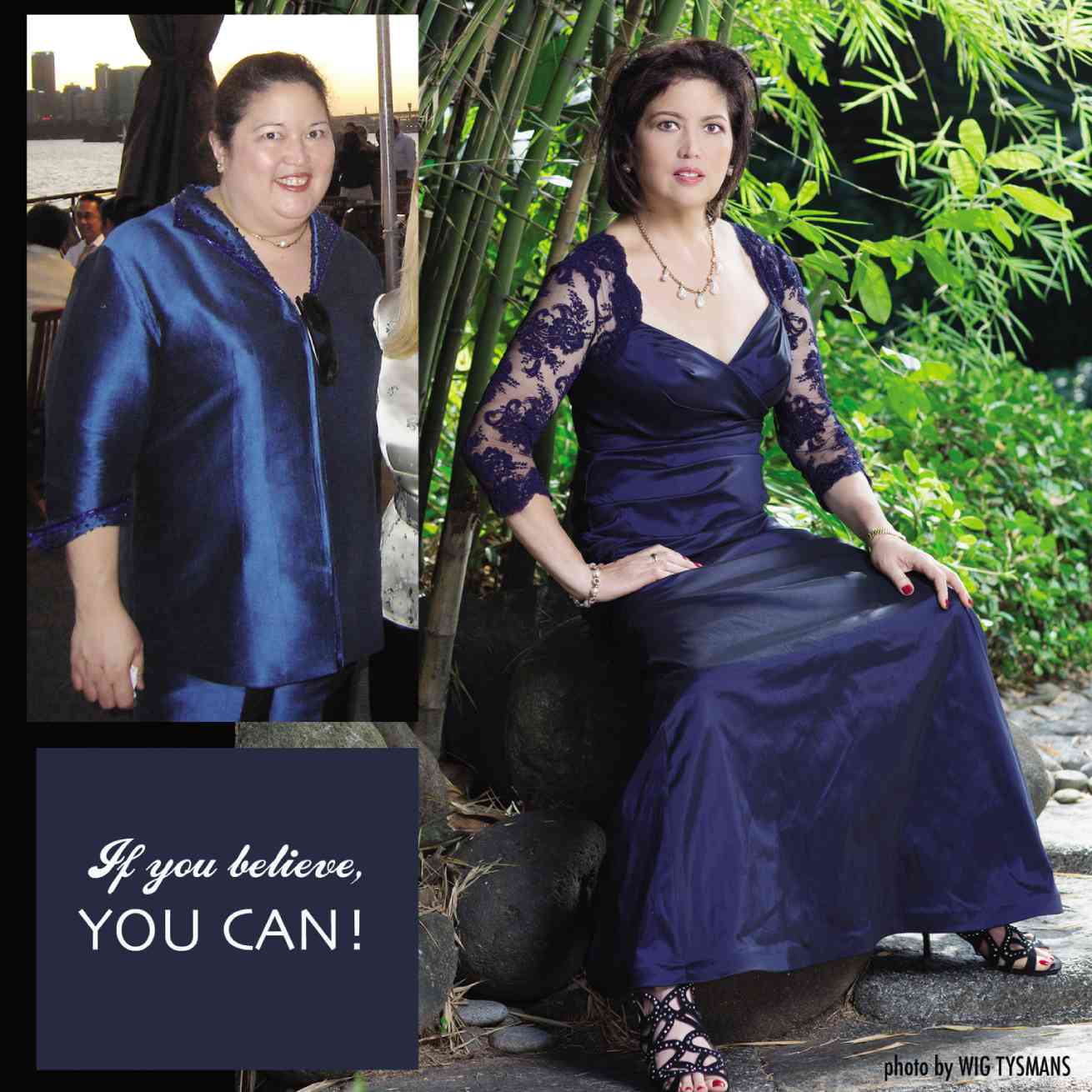 LITA Puyat . photos taken in 2007 and after. losing 90 lbs last year have inspired.netizens

For Lita Puyat, happiness is losing 85 lb–and dancing the salsa

Lita Puyat made a name in the 1990s as one of the country’s top photographers. After living in Australia to pursue a culinary career and undergoing a lifestyle change, she has to reintroduce herself to people. After losing 85 lb, she is unrecognizable to most.

The 53-year-old has struggled with eating disorders for most of her life. At her heaviest, the photographer-turned-chef, who is 5’7”, weighed 235 lb. After trying other diets and exercises, she successfully dropped her weight to 148 lb with the Cohen plan in Sydney. This is a customized and stringent eating program that recommends foods based on the client’s blood profile.

“What I’m eating is boring,” she said. The fillet was cooked in an air fryer. She explained that instead of drenching the fish in calorific hot oil, this gadget circulated extremely hot air so that the food was fried quickly to a crisp. To make it look appetizing, the low-calorie fish fillets were set on a bed of lettuce and drizzled with olive oil and balsamic vinegar.

“I’ve never been happier in my whole life!” she exclaimed. “I want to go out, get dressed and do everything. It’s not just about losing weight, looking good and feeling great. It’s knowing that you can accomplish something which you thought was impossible. It opens you up to other possibilities. That’s the greatest lesson that I’ve  learned, rather than just knowing what to eat and going to the gym.”

The journey was not easy, however. Puyat admitted that her life was characterized by binges, denial and low self-esteem. As a child, she depended on her internal signs of appetite and satiety, eating what she pleased.

“I hadn’t even finished what I was eating but I wanted more because it was so good,” she said.

Although her mother restricted her food intake, Puyat found ways to go around it. She paid the price in high school when she would be left out in the corner during parties while the attractive girls socialized with the boys.

“When things are painful, you pretend it’s okay. Finally you look at yourself in the picture and you can’t deny it,” she said.

Well-meaning relatives and friends urged her to lose weight. But their efforts were in vain.

Meanwhile, Puyat joined a film workshop under director Mike de Leon, then went to study at San Francisco State University and New York University. Coming home, she worked in the film industry and then put up her own photography studio.

Puyat gained a reputation for the high quality of her work. “When I do something, I pour my entire self into it,” she said. With her earnings, she would reward herself with travels.

Despite the recognition from her peers and the publishing world, Puyat felt empty.

While visiting a cousin in Sydney, she came across Le Cordon Bleu International. Puyat had been cooking and experimenting with recipes for a while. She decided to take the risk of pursuing her passion. Photographer Neal Oshima, who originally encouraged her to get into photography, gave his blessing. “Change is good. There’s never been a digital chef,” he said.

“I went to Australia in 2004. I was on a different thinking. Photography had become digital. I’m not taking potshots at new photographers, but you have to be in front of the laptop so much. You spend so much time in post production. Darkroom processing was different,” she said.

At Le Cordon Blue, Puyat pursued certifications in pastry and cuisine. As a student, she was allowed to legally work for 20 hours. Then in her 40s, she worked with 19-year-old chefs and assistants in some of Sydney’s top restaurants. “Working commercially was hard on the body, especially when you do double shifts. But I thought I could use the experience,” she said.

After getting a resident’s visa, Puyat started working from her house, making cakes and pastries.

In 2007, Puyat said she had a “bad personal experience” which prompted her to do something about herself.  Puyat entered Weight Watchers, a program with restricted food portions, coupled with a mentor and support group to help the individual. Her biggest fear was to stand on the scale.

“When I saw the weight, I didn’t want to go out. It was shameful. I returned every week to be weighed,” she said.

Puyat lost 40 lb but gained back 10 lb. “From 2008 to 2013, I was either in denial or slacked off with the success. I went to the gym to work with a personal trainer, which was not cheap, and took Zumba classes three times a week. But it was hard to accept that even if I was doing something, my body was not changing,” she said.

Her sister, who dramatically lost 35 lb with the Cohen diet, urged Puyat to try it.

When the Cohen Lifestyle Center opened near her house, Puyat saw it as a sign. “There’s no excuse. The Cohen diet allows you to eat certain proteins and vegetable and very little carbs. Its portions are based on your ideal weight, gender and height. The center monitors your blood profile to see how the foods affect your blood sugar, cholesterol, etc. Cohen helped me get rid of my cravings. People who failed in other diets are successful here. The hardest part was the transition, especially when you’re going out and socializing. You have to find ways to sustain your weight loss.”

Puyat was making pastries as a home business when she started on the Cohen plan. Instead of feeling miserable about the restrictions, she would plate her meals, take a photograph on her iPhone and post the recipes on Facebook under the account Cohen Meal Creations. She clarifies that the name merely acknowledges the program which the recipes are based on.

“I would pretend I was eating in a restaurant, and I would record the meals. Every time I ate, I would make a comment about it. The FB account was like my notebook, chronicling my journey by documenting what I ate. I don’t make money out of this. I just want to share my recipes,” she said.

After losing 90 lb, Puyat posted her portraits, which resulted in over 12,000 hits.

The diet has completely altered her taste buds. While dining in a Thai restaurant in Sydney, a companion observed that Puyat was so fussy. The lady asked if she had an eating disorder.

“Isn’t it ironic? I’ve had an eating disorder for 52 years which has recently been fixed. She saw that I was eating small amounts and I was too careful about the ingredients,” said Puyat. “When people ask me why the Cohen works where others have failed, I tell them it’s 100-percent do or die.”

To encourage people with the same dilemma, Puyat opened another FB community page, 100 Days of Weight Loss Motivation, which is filled with inspirational postings.

“I came across a magazine article in New Zealand on what incites a person to change. Although you have the desire, you may not have a plan. You think about losing weight, but you don’t set the wheels in motion. To accept something that is not working in life is already a hurdle. I took the next stage of finding a way to get there. I gathered information, committed to a plan and did it. You’ve got to decide and be determined to do it.”

As of this writing, Puyat is in the US to study the New York Salsa under Eddie Torres. After losing her job in a restaurant in Sydney, she came across a signage for a dance class. She studied the basic Latin ballroom then switched to salsa, Latin-based social dancing. Happiness was found in the salsa clubs and meeting people who shared the same love for the dance.

Puyat was also inspired by watching the Australian Salsa Open. One of the contestants was a plain, middle-age woman with basic dancing skills. Nonetheless, the audience rooted for her.

“You could get intimidated by watching all these beautiful bodies and their perfect technique. But when I saw the lady and how the community warmly responded, I found it encouraging. If she can do it, why can’t I?”