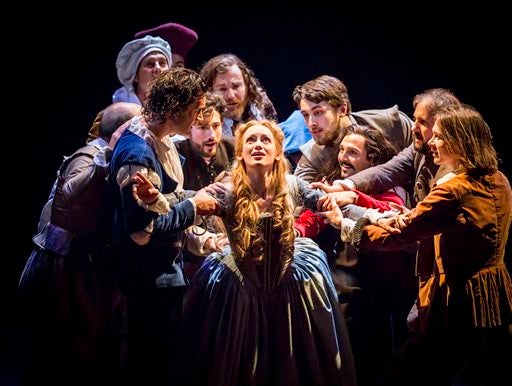 A June 2014 photo made available by Cornershop PR showing Lucy Briggs-Owen as Viola with members of the company. A hit. A very palpable hit. So says a character in the new West End production "Shakespeare in Love," quoting "Hamlet." AP

So says a character in the new West End production “Shakespeare in Love,” quoting “Hamlet.” And so say most London critics about the stage version of the Tudor-set rom-com that charmed its way to seven Academy Awards in 1998.

On Thursday critics showered the play with accolades that will make producers’ ad campaign a dream. The Evening Standard’s Henry Hitchings praised the play’s “fizzy, infectious exuberance,” while the Daily Telegraph’s Charles Spencer said it “generates a glow you could warm your hands by.” Paul Taylor in The Independent topped them all: “It makes you feel grateful to be alive.”

Adapted by Lee Hall — and co-produced by Disney, whose backing has helped fund a large-scale production with a 28-strong cast — the play sticks close to the film’s plot.

The burgeoning Bard (Tom Bateman) is young, broke, and has writer’s block — until he meets adventurous gentlewoman Viola de Lesseps (Lucy Briggs-Owen). She returns the playwright’s ardor, and also dreams of becoming an actor, then a forbidden goal for a woman. But she is betrothed to the boorish Lord Wessex. The course of true love never did run smooth.

While many movies have been adapted for the stage in recent years — from “The Bodyguard” to “Fatal Attraction” — in this case the idea is so obvious it’s amazing it took so long. At the heart of “Shakespeare in Love,” alongside the human romance, is a love affair with the theater.

“I kind of set out to write the play the film would be adapted from,” said Hall, whose work includes the stage musical “Billy Eliot” and a forthcoming movie biopic of Elton John. “The theater is the perfect place to do a show about theater. You can make all those gags that you can’t possibly make in the film.”

In the film, it was possible to see the cast of charmers, chancers, dreamers and moneymen swarming around London’s Elizabethan playhouses as stand-ins for Hollywood players. Here, the play’s the thing.

Shakespeare and his contemporaries struggle against lack of funds, state censorship, fickle audiences and creative constipation — and out of it all emerges art.

The movie was co-written by playwright Tom Stoppard, a master of brain-tickling banter. Hall said he kept “about 90 percent” of the movie’s lines, but added new material and chunks of Shakespeare’s own words.

“I saw it rather like a musical, but the numbers were the Shakespearean verse,” Hall said after Wednesday’s opening night at London’s Noel Coward Theatre.

The result is a play peppered with Shakespearean in-jokes, designed to make audience members who were paying attention in high-school English classes feel satisfyingly clever.

Bateman and Briggs-Owen are hugely appealing in the central roles, played onscreen by Joseph Fiennes and Gwyneth Paltrow. Briggs-Owen, in particular, has a loose-limbed charm reminiscent of the heroines of 1930s screwball comedies.

There’s sterling work from the whole cast under Declan Donnellan’s direction, including David Oakes as Shakespeare’s friend and rival Christopher Marlowe, Paul Chahidi as impresario Philip Henslowe and Colin Ryan as a creepy, violence-loving lad who may be the future of entertainment.

Live musicians and Elizabethan-y song and dance contribute to an entertaining evening that wears lightly its insights about the fine line between comedy and tragedy. In the play, Shakespeare sets out to write a crowd-pleaser titled “Romeo and Ethel the Pirate’s Daughter.” What audiences want, Henslowe tells him, is “love — and a bit with a dog.”

The work-in-progress becomes the tragedy “Romeo and Juliet,” and “Shakespeare in Love” ends on a bittersweet note of love and loss.

But there is a dog. He’s called Spot and he gets one of the biggest ovations of the night.