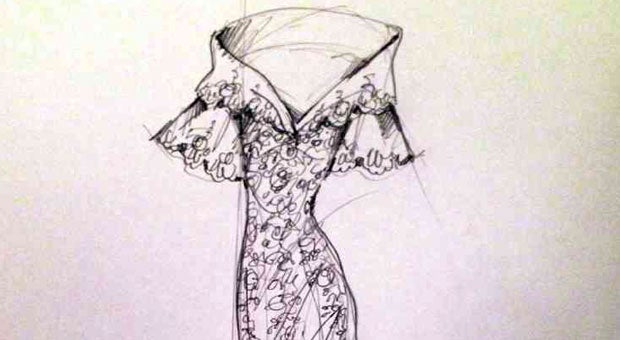 If you’re expecting a pomp-and-pageantry-less red carpet at the President’s State of the Nation Address (Sona) on Monday, owing to recent natural calamities and the country’s political climate, think again. As one fashion designer says, it’s just not the way Filipinos are.

This will be the first Sona after the Napoles scandal that dragged the names of many high-ranking officials in the muck, and the recent controversy on the Disbursement Acceleration Program (DAP). And while such ignominy isn’t unusual, it’s the designers themselves who are exercising their versions of austerity in their own designs this year.

Randy Ortiz—the go-to designer of Leyte Rep. Lucy Torres-Gomez, Sen. Nancy Binay-Angeles and senator’s wife Tootsie Angara—is making what he calls “simple gowns this time.” In the past, Ortiz has also made clothes for the sisters of President Aquino for the Sona, including TV host Kris Aquino.

“I just thought of doing simple dresses for them for so many obvious reasons,” Ortiz says with a knowing laugh. “I’m doing them that way without sacrificing my aesthetics. The way I see it, whatever calamity or scandal that befalls us, we shouldn’t feel so bad. Life goes on. Austerity, even on occasions such as this, is just not the way Filipinos are.”

Ortiz isn’t alone in this thinking. JC Buendia, who dressed up President Gloria Macapagal-Arroyo when she was in office and who made barong Tagalog for Mr. Aquino early in his term, says he’s making “unembellished” gowns for the spouses of some young and neophyte congressmen.

“As we have seen in the past, some attendees have a tendency to be rigodon-ish,” Buendia says, referring to over-the-top Filipiniana dresses.

“These young clients, they agreed to my new aesthetics, which are unembellished and more comfortable silhouettes of the Filipiniana, like the baro’t saya and patadyong.” Then he adds,

with a laugh, “I’m beginning to think I have some authority because they’re actually listening.”

Though another designer, Paul Cabral, supplies Mr. Aquino his barong Tagalog, Buendia continues to make some of the President’s everyday polo shirts.

“I also tell my clients that since it’s an afternoon affair, embellishment isn’t necessary,” Buendia says. “Otherwise, they’ll be the butt of jokes.”

Ortiz says Torres-Gomez will wear a vintage embroidered piña terno in nude champagne, while Sen. Binay will be in a white modernized Maria Clara.

Since he regularly makes clothes for both women, they leave it to Ortiz to decide on an appropriate look. What he’s making are his new takes on the national costume, including Balintawak-inspired cocktail wear, in simple silhouettes with his trademark embroidery.

“We’re circumspect, but fashion moves forward,” Ortiz says. “Calamity or not, at the end of the day, the Filipino is beautiful pa rin. And I think that’s the spirit of this whole thing.”

The TV host originally wanted to wear black, but “I think the President wanted his supporters to wear yellow, so I just added the black lace as an accent,” Santiago says.

“I always make it a point that the terno isn’t flashy,” says Ivarluski Aseron, who’s making a dress for Makati Rep. Abby Binay. “It should be dignified-looking for the wearer—not too trendy, not too much, not over the top. It should look decent. You can be experimental for fashion shows, but not for an event like the Sona.”

For Rep. Binay, Aseron is designing a piña terno with a black lining, which appears grayish under the natural color of the fabric. He’s adding some linear details on the upper part, with a punch of color.

Joey Samson, meanwhile, is set to make the dress of actress Heart Evangelista, who’s dating Sen. Francis Escudero. Of the four sketches coursed through her stylist, Kat Cruz-Villanueva, Samson, who at press time had yet to meet with the actress, says she chose a version of his famous cage terno, in white.

of pregnancy, also wore a dress by the same designer in last year’s Sona, though she bought it off-the-rack, at Myth in Greenbelt 5.

“I had to make some adjustments on the dress because she bought it at the last minute,” Crisostomo says. “This time, it was made to measure, in a shade of mint. She still has a very small belly, but she asked to (make the dress) feel light and easy to wear.”

Like his colleagues, Crisostomo believes in simplicity at the Sona: “Let’s not make it inappropriate. Clothes should be simple and realistic.”

Crisostomo is one designer who doesn’t feel the threat of clients making an exodus after hearing his pronouncements. “It actually works to my benefit because I make daywear, very seldom red-carpet dresses. It won’t hurt me,” he says.

His regular clients for business wear include Torres-Gomez, and he also makes suits for Sen. Aquino.

Perhaps more vocal about his distaste for pageantry in the Sona is Frederick Peralta, who has annotated the annual event’s red-carpet fashion for a TV news station.

“When I was doing that show, nakakatuwang tingnan, but some people took it too seriously,” Peralta says in hindsight. “May terno, may Muslim costume, may baro’t saya, parang fiesta! It’s funny because even the guests were competing for attention. It was a pageant for all. There’s a time for pageantry, and I think the Sona isn’t the time for that.”

This coming from a designer who also makes dresses for the Sona every year—this year being no different, with an order of a terno from Quezon Rep. Evie Escudero, the mother of Sen. Escudero, and a couple of other guests.

Peralta says he has mulled over his contribution to this annual parade: “It’s a living, I know, but why am I doing this? Am I right to follow their likes? If you think objectively, they’re just seated the entire time!”

He says he’s unafraid of the backlash, since “it’s true anyway. It’s a show of the artistic freedom of both the designer and the wearer, I know that. But it’s a serious political event, and that calls for a measure of credibility. Why don’t they come in work clothes, in business suits? Why make it into a national costume event? I don’t think wearing the terno in the Sona necessarily adds to the essence of the terno.”

One designer, however, has steered clear of the Sona altogether. Eddie Baddeo, whose name was embroiled in the Napoles scandal, says he’s “avoiding politicians and their wives because of PDAF (Priority Development Assistance Fund) and DAP, and the trauma with Napoles.”