‘Dani Girl’–see it with someone you love | Inquirer Lifestyle ❮ ❯ 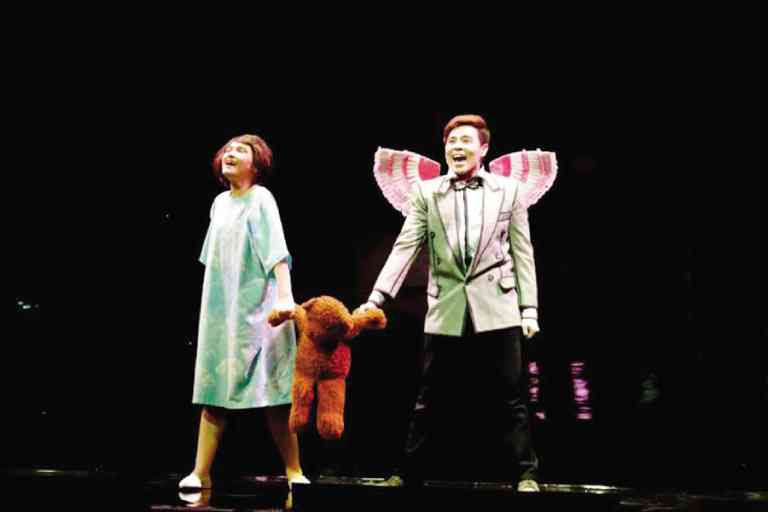 ‘Dani Girl’–see it with someone you love

One of the things one learns studying Literary Criticism is that objectivity in the classic sense is an impossibility. A theatrical review, for example, does not come out of nowhere, and is always deeply influenced by the values and life experience of the reviewer. The best he can do is be aware of his biases as he writes.

The practical upshot of this is that, sometimes, a reviewer will find himself reviewing a play that hits so close to home and that moves him so deeply that his analysis is a foregone conclusion. The show has simply pressed all his buttons.

With that in mind, it is my pleasure to introduce the Sandbox Collective, a new theater group, and its very first production, “Dani Girl,” directed by Toff de Venecia. If you have a heart in your chest and a brain in your head, you owe it to yourself to see this play, and to see it with someone you love.

Disclaimers: I lost a dear friend to cancer when we were in college; he and I were planning to go into a teaching career together. I delivered a eulogy for a friend who died at 24, far before her time. The director, my batchmate, lost his sister under absolutely tragic circumstances shortly after we graduated from high school.

I knew going in that there was no way these things would not affect my view of “Dani Girl,” a play about a child facing death far, far too young. Now I must post a content warning: This play will make you cry under any circumstances, but it will hit like a hammer if you have ever lost someone.

It was a brave, almost foolhardy decision for Sandbox to start its theatrical career with a play about cancer so soon after “The Fault in Our Stars” came out. The latter is, of course, a well-crafted movie based on an award-winning young adult novel, and it is also about young people dying from cancer.

I was frankly worried. How could “Dani Girl” avoid being overshadowed? Would it turn out to be a shallow touchy-feely greeting card of a play?

The play dispelled my worries by the second song. The play’s creators, Michael Kooman and Christopher Dimond, received the 2010 Jonathan Larson award, and it shows. It has an honesty and an emotional impact that make it feel like a softer, sweeter version of “Rent.”

“Dani Girl” is not like “The Fault in Our Stars.” There is no romantic subplot. The play insists on making its cancer-stricken protagonists look like they actually are about to die of cancer.

What it does share with the other work, though, is a willingness to explore difficult themes with total honesty. Many plays struggle to convey even one theme properly. “Dani Girl” has no less than five.

It is a buddy play with a delicious message about the awkwardness and joy of childhood friendships. It talks about what it means to be a hero, and does so in a way that is not preachy at all. It is a serious discussion about the value of escapism, and whether or not it can go too far. It features a flawed, imperfect mother who ultimately shows the power of a mother’s love. Most courageously, it is a story whose protagonists realize that faith does not give them all the answers.

The costumes are simple but perfectly suited to the characters and story. The stage is clever without being distracting, except for the one moment (you will know it when you see it) when the stage itself will bring tears to your eyes.

The songs are catchy and fun when they aren’t breaking your heart, and sometimes even when they are. For all its pathos, the play is funny; its geeky, innocent humor will resonate well with any audience, but especially those of us who grew up with “Star Wars” and “Back to the Future.”

I have one solitary complaint. In a play with realistic hospital beds and lovingly detailed lightsabers, the prop for the spaceship is minimalist. Sandbox, you awakened the child in me and then denied me a spaceship? For shame!

The chemistry between the actors is topnotch. Shiela Valderrama, in an understated, emotional performance, portrays a mother facing every mother’s worst fear. Lorenz Martinez brings energy and irony to a very difficult role. Reb Atadero is adorable—there is simply no other word for it. And, of course, Rebecca Coates brings it all together as the show’s titular Dani Girl.

Several of the performances feature a talkback with director Toff de Venecia and the actors, and some of the play’s proceeds will go to the Cancer Warriors Foundation. I could even give more examples of how this play goes above and beyond, but we’re out of time.

Set aside your plans for the weekend and see this play. You won’t regret it.