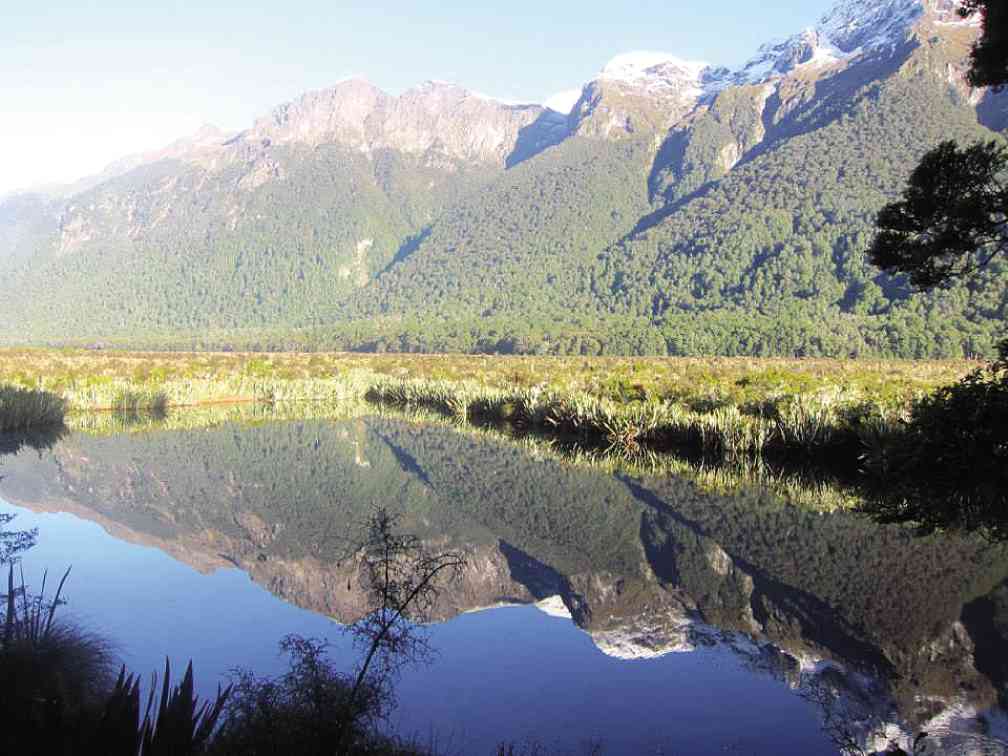 The Mirror Lakes are just one of the postcard-perfect vistas in New Zealand.

The cold and rainy weather failed to dampen this writer’s spirits a few weeks ago when we set foot in Hobbiton, the fictional village of the Hobbits set and shot among the rolling hills of Matamata in New Zealand.

While I had watched four of the five movies (the sixth has yet to be screened), I wasn’t a rabid fan who can watch the first three movies back-to-back and still have the energy to dissect the scenes one by one. I need not have worried. Apparently, a good number of tourists who book a coach or rent a vehicle to get to Hobbiton have never watched any of the movies.

“By the end of the tour, however, they have already made plans to watch them once they get home,” said our guide that afternoon.

True enough, quite a few members in our group of lifestyle media and travel agents hadn’t seen any of the movies. This didn’t stop them, however, from enjoying the lush green landscape and the charming little facades with their round doors painted crayon-bright colors.

When the filmmakers were scouting for locations on board a helicopter many years ago, they spotted a towering tree located by a pond and decided it would be a good place to build Hobbiton. Little did they know that the farmer who owned the land had been seriously considering cutting down the tree that is now known as the Party Tree.

I didn’t expect to be as charmed by Hobbiton as I was. Visiting a new place or one  \I had only heard of or seen in movies always has this effect on me.

What I particularly liked about Hobbiton is that it is a genuine living set, one where 95 percent is alive and growing. Our guide pointed out several new “homes” that have not yet been seen onscreen as they were constructed and shot in time for the sixth movie.

Here and there were baskets or wheelbarrows filled with freshly gathered fruits and vegetables. A bunch of laundry appeared to have been hung out to dry just seconds ago. It was as if the Hobbits had  stepped into their houses at the exact moment we arrived.

It’s difficult to believe that the one major thing that’s not real is the oak tree “growing” on the roof of the house of Bilbo Baggins. The metal tree is clad in silicone oak bark while over 43,000 oak leaves from Taiwan were attached to branches one by one resulting in a fake tree that looks 100 percent real.

This sense of wonderment stayed with me throughout the rest of our stay in the North and South Islands of New Zealand.

Since we had come from the heat and humidity of Manila, the wintry weather was a welcome respite. It also gave us a chance to take out from storage our heavy jackets, mufflers and leather boots.

Every morning, we were awakened at 6 or 6:30 and while I usually snuggle in for a few more blessed minutes of sleep, I would force myself to stand up and prepare for what the day held in store. Fortunately, it was always something good.

For dinner one evening, we were treated to Te Po, an evening of cultural and dining experience at Te Puia. The food served at the Te Po is cooked underground. This is called the hangi or traditional earth-cooked oven meal.

It’s a real family affair at Te Puia with the patriarch meeting us at the entrance, and his wife, and sundry relatives performing traditional Maori songs and dances with gusto. We later feasted on the selection of smoky and succulent pork, chicken and lamb as well as tasty seafood soup crammed with fish and crab meat.

The Maoris that we met during our week-long trip all showed a distinct pride of place, whether they were talking about their traditional garb, their wood carvings and their staple food, or singing songs that dealt with the universal themes of love and loss.

One afternoon, we visited the Waitomo Caves where glow worms light up the crevices and cave ceilings with their weak light. At one point, our female Maori guide told us to stand still since we were in the “cathedral,” the point where the cave ceiling is at its highest.

“We sometimes hold concerts here because the sound is so beautiful,” she said before asking us if we wanted to hear her sing a Maori song. Once she started singing, everyone fell silent, content simply to listen.

She then asked for a song in return so one of us began to sing, “Dahil Sa ’Yo.” Several members of the group joined in and although it might have been pitchy in parts, the effort—this exchange of songs—was much welcomed.

If you are so inclined, you will not run out of strenuous, sporty, maybe even harebrained things to do—like jump off a bridge—in New Zealand.

While the first modern bungee jumps were made in the UK in 1979, organized bungee jumping can be traced back to AJ Hackett, a New Zealander, who made his first jump from the Greenhithe Bridge in Auckland in 1986. Years later, he opened the world’s first permanent commercial bungee site, the Kawarau Gorge Suspension Bridge near Queenstown in New Zealand’s South Island that is still in operation.

Located along the shores of Lake Wakatipu, Queenstown is the island’s most popular resort town. When we arrived, the area was celebrating the last few days of the Winter Festival 2014 which includes concerts, fireworks and a crazy elimination game of dodge ball where participants dress up in costumes.

After dropping off our bags in the hotel, we were picked up by three 4WD for a fun and bumpy ride around Queenstown. Those who had been to Dubai likened the experience to dune bashing but that this was much bumpier. Nomad Safaris, the outfit that offers these and other trips, highlights spots where scenes from the Lord of the Rings films were shot.

In the 1800s, gold was discovered in the area so people from all over the world flocked to Queenstown. Very little gold is left in the rivers now but a demo on panning for gold is included during the pit stop for hot cocoa and cookies.

On our last full day in Queenstown, we boarded a Jet Boat for an adrenaline-pumping ride on the Shotover River. The boat that can speed and skim over very shallow water can seat 15. Prepare to shriek as the 30-minute ride is like a rollercoaster ride but with unparalleled views of the Shotover Canyon walls.

If I could take away only two memories from the trip, it would be the visit to Hobbiton and our cruise on the Milford Sound. The trip from Queenstown onboard the glass-ceilinged coach was long and tiring but we were rewarded with postcard perfect vistas everywhere we looked.

On that freezing afternoon, as the captain of the Milford Sovereign nudged our boat closer and closer to a towering waterfall, I leaned into the mist and hoped I’d remember every detail.

Pacific Destinationz has tour packages to New Zealand’s North, South or both islands.