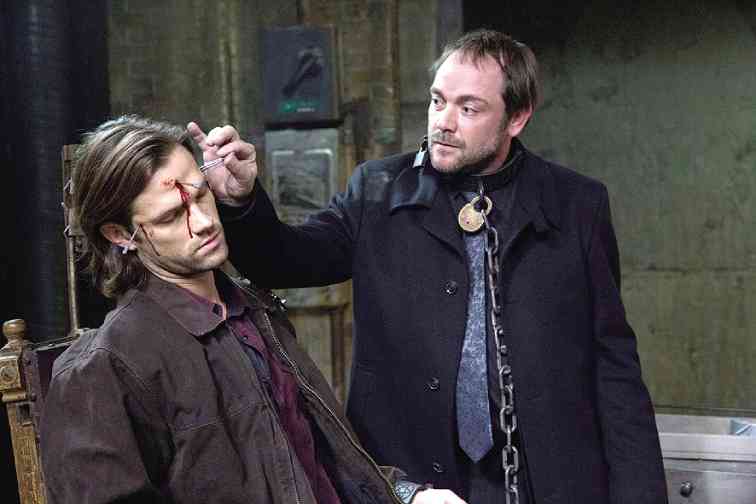 Calling Crowley: ‘There are scarier things in life’

For a fantasy or paranormal series to last 10 years on TV is no easy feat, and yet “Supernatural” makes it seem as easy as Dean Winchester’s favorite pie.

It’s not just because the Winchesters, played by Jared Padalecki and Jensen Ackles, are insanely hot (although that’s a huge part of the show’s appeal), but also because the writing and dialogue of the show are witty, hilarious and emotional without being cloying.

The bond between the two brothers draws you in, while characters such as Castiel, Crowley, Garth and Charlie will leave you glued to every episode to see if they’ll help the boys hunt down demons, ghosts, and other creepy-crawlies across small town USA.

Super had a phone interview this week with the King of Hell himself, Crowley, played by sci-fi show vet Mark Sheppard, who has had memorable roles in other cult shows like “The X-Files,” “Firefly,” “Medium, 24,” “Doctor Who” and “Battlestar Galactica.”

From a simple crossroads demon on “Supernatural” to Hell’s show runner, Sheppard’s role is now a series regular.

What will your character bring to the new season?

A whole new lease on humanity. We left season 8 with Sam trying to turn Crowley human, then deciding this wasn’t the path they needed to go down, that this was all a trick by Metatron. In season 9, we’re dealing with the aftereffects of that, and what happened to Crowley, and perhaps seeing more of his human side.

Jared Padalecki and Jensen Ackles are known to be huge pranksters; have you been on the receiving end of their pranks? How does this affect the atmosphere on set?

They are pranksters (laughs). We work very hard, so we play very hard as well. It’s quite intense, the amount of work that goes into making an episode of “Supernatural,” and when things go wrong it’s very funny, we’re very quick, everyone’s very smart on set. So there’s a tremendous sense of fun, especially when something goes wrong. They’ve been very kind to me over the years, they sort of left me alone, but Jared does have a habit of picking me up and shaking me at will. He just picks me up and goes, “Hey!” and just shakes me back and forth, which is kind of scary because he’s very, very strong. I think Jensen is more of a gentleman, although in the DVD of season 9 you’ll see a few of the gags on the gag reel. If you’ve ever watched any of the gag reels, that’s pretty much what our daily life is like.

Did you ever think that Crowley would become so popular after his first appearance as a crossroads demon?

I had no idea. I just knew that it was such a delicious character, that (writer/executive producer) Ben Edlund had created this character, and it was just a fun thing to play. I had known (director/executive producer) Kim Manners quite well  and he’d always tell me over the years, “You have to come do ‘Supernatural,’ you’ll love the boys.” And unfortunately he passed away, and the occasion had never come up that I’d do “Supernatural.” Not long after he passed away, the role of Crowley appeared and I just needed to go do that, and it’s been an amazing journey.

What do you love most about playing Crowley?

My favorite thing about the character is that the writers seem to have so much fun creating the dialogue and the scenarios for him. It’s so much fun to play with the language that they give me. It’s such a great character; he serves himself first, you always get the feeling that he’s always one step ahead of the rest of the situation so it’s a lot of fun to play that way.

What do you think has made “Supernatural” such a long-running success?

I think you’ve got to care about the Winchesters; if you’ don’t care about the boys, you wouldn’t be watching. They’re the linchpins of the show, and they’re great actors. The stories and the writing have gotten better and better, season after season. And the boys are even more fascinating than when they started, they’re just so good at what they do.

Based on Crowley’s ramblings in season 8, do you think he has the hots for Sam?

No. I don’t think so. I think he’s probably more into Dean than he is into Sam (laughs). It was a fascinating time. We shot those scenes in a church onstage in three days, and we shot them unusually in sequence, which is a rare thing to do in television. We were able to progress through Crowley’s breakdown in real time. It was so much fun. I think Jeremy (Carver, writer/producer) might have been drinking a little at 3 a.m. when he was writing the dialogue (laughs). It’s really, really funny. What a great finale that was, and a great episode to lead into season 9. The attempted humanization of Crowley will have a profound effect on him.

Crowley is a fan favorite; what makes his character such a hit?

I think it’s the snarkiness and the wit. He’s not really a bad guy in the true sense of a bad guy, I think he’s just as benevolent as he is malevolent, so he’s hard to read. Is he on the side of the Winchesters, or is he not? He’s an interesting act to watch because he’s not a traditional bad guy, it’s a fully fleshed out character which is really fun to play.

What kind of reaction do you get from fans who see you at Comic-Con or when you’re out in public?

I think that my profile has definitely increased as “Supernatural” has gone on, it’s a wonderful gift. It’s so humbling. To come up to an actor and tell him you love his work is the kindest thing you could ever tell him. I’ve been shown nothing but love with this character, I enjoy every minute of it and thank you to everybody that shows me that love.

There’s quite a lot of great episodes in season 9, but I love the finale. There’s also an episode that John Badham directed you should look out for, which is just fabulous and explores the relationship between two characters  I really enjoyed. I think my favorite episode thus far has been “The French Mistake” (season 6). It was just a fantastic episode. It was brilliant and so much fun to watch.

Oh, yeah. I spend all my free time running hell and murdering people, it’s just what I do (laughs). No! It’s about the realm of imagination, it’s what makes it wonderful. Hopefully, I don’t share character traits with Crowley, but he’s fascinating to play, he doesn’t follow rules, and that’s what makes him interesting.

Has anything from the series spooked you in real life?

My youngest son William was fascinated by hellhounds and he was on the phone with (former showrunner) Sera Gamble explaining to him how hellhounds worked, which I thought was fascinating, too. With explosions, creepy-crawlies, and crazy character actors, I don’t think they scare me so much as fascinate me. I think that’s the fun part of it. There are scarier things in real life, you know?