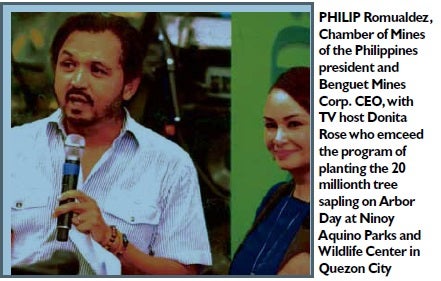 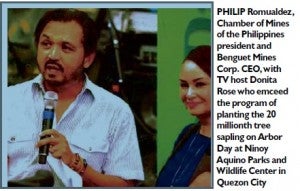 Arbor Day saw the ceremonial planting of the 20 millionth tree by miners led by Chamber of Mines of the Philippines president and Benguet Corp. CEO Philip Romualdez and Department of Environment and Natural Resources Undersecretary Marcial Amaro. The event was held at the Lungsod Kalikasan of  Ninoy Aquino Parks and Wildlife Center in Quezon City.

Romualdez told some 150 key officers and associates of large-scale mining companies, “Today’s auspicious milestone is the successful conclusion of navigating a common roadmap toward environmental protection and resource conservation.

“We are brothers-in-arms and, as members of the Philippine mining industry, we have been placed in a position where we can help our country—to rehabilitate our national forests and address public health through clean air; to provide communities with a natural protection against climate change; and to leave a place far greener than before we discovered it.”

Planted as the 20 millionth tree was the Philippine rosewood sapling.

“When this tree grows,” said Amaro, “it will overtop all forest trees here.” He explained that “the Toog (Philippine Rosewood) sapling, which is endemic to both mine sites and rice fields in Mindanao, is known for the hardness of its wood and the sheer height and girth of its trunk.”

The Philippine mining industry collectively planted 20 million trees in 2011-2013, according to DENR records. On average, these trees cover over 40,000 hectares, which is roughly two-thirds the size of Metro Manila. The same area is almost twice the size of Quezon City and Manila combined.

Romualdez and Amaro were joined by actress and commercial model Sam Pinto, whose mother, Ma. Theresa Pinto, was once a Benguet Corp. scholar. The program was hosted by US-based TV personality and former MTV VJ Donita Rose.

Pope Francis has appointed Archbishop Bernardito Auza, 55, the apostolic nuncio to Haiti, as permanent observer of the Holy See to the United Nations, according to The Varsitarian, the official student paper of the University of Santo Tomas (UST). He thus becomes the first Filipino nuncio to the UN.

“In this forum, the Holy See Mission communicates the centuries’ experience of the Catholic Church to humanity, and places this experience at the disposal of the United Nations to assist it in its realization of peace, justice, human dignity and humanitarian cooperation and assistance,” The Varsitarian reported, quoting the official website of the Permanent Observer of the Holy See to the UN.

Auza was appointed by Pope Benedict XVI as apostolic nuncio to Haiti on May 8, 2008. He was there during the 2010 massive earthquake which destroyed a huge part of western Haiti. Following the death of Archbishop Joseph Serge Miot as a result of the earthquake, Auza also became the apostolic administrator of the Archdiocese of Port-au-Prince for a year.

Born in Talibon, Bohol, Auza undertook seminary training at the UST Central Seminary, where he obtained his Licentiate in Philosophy in 1981 and Licentiate in Theology in 1986. He also finished his master’s degree in Education in 1986 at the UST Graduate School.

Auza then went to the Pontifical University of St. Thomas (Angelicum) in Rome, where he obtained a Licentiate in Canon Law in 1989 and a Doctorate in Sacred Theology in 1990. He went to Pontificia Accademia Ecclesiastica for his diplomatic and linguistic studies.

As parish priest Jun Castañeda waited at the foot of the altar to welcome Our Lady, the people felt her loving motherly presence as they stood looking up to her. The pilgrim image was brought all the way from Manaoag, Pangasinan. Like many Ilocanos, the people of Isabela are devoted to her.

The patroness of Palanan, Isabela, is St. Mary Magdalene. Bishop Joseph Nacua, OFM-Capuchin, visited the town on her feast on July 22.

The parish caters to the spiritual needs of other coastal towns: Dinapigue,  Divilacan and Maconacon. Parish priest is Fr. Bernard Agarpao, OFM.

On Aug. 2, Our Lady of Mercy Parish in Bahay Pare, Candaba, Pampanga, will celebrate the apparition of Our Lady of Mercy to St. Peter Nolasco, St. Raymund Peñafort and St. James of Aragon on Aug. 2, 1214, in Barcelona, Spain, with a procession at 6 a.m. and Holy Mass at 8 a.m. by Fr. Peter Sitchon, parish priest.

Nuestra Señora de la Merced gave the three men the white scapular to use it to protect captives of the Moors at the time. The Virgin Mary also told them to establish the Mercedarian order.

Dr. Alvin Balatbat, who saw a copy of the scapular in a religious store in St. Patrick Cathedral in New York in December 2001, asked the women in the correctional in Mandaluyong to make them. To ask for a white scapular for healing, please text 0917-5401524.

Try to catch Our Lady of Mercy when she arrives at the Radio Veritas chapel tomorrow for 12 noon Mass. She leaves Aug. 1, Friday.

Fr. Paul Inez, SDB, of the Don Bosco Mission in Calauan, Laguna, is appealing for help for 6,000 families that were affected by Typhoon “Glenda.” Emergency relief like canned goods are needed.