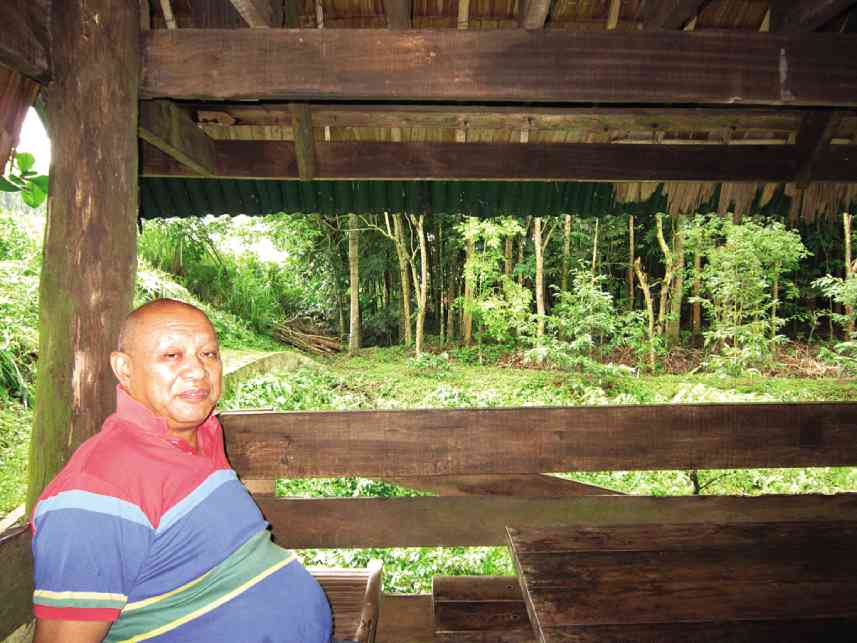 JOSELITO Llanes has created his version of Eden.

WHAT do you do if you’re a bachelor with property and quite a bit of money, and with no heirs to inherit your worldly goods?

Why, you create a forest wilderness inside a city, of course.

And that’s exactly what businessman Joselito Llanes did with 15 hectares of land in Lipa City that he inherited, together with his brothers and sisters from his father.

Lipa, with its wide avenues, schools, industries and tourist spots, is all about progress; so to enter a forest just by turning from a major thoroughfare is nothing less than astonishing.  No gradual transition from urban jungle to suburb, to open space and then to forest. None of that. You turn from a concrete road lined cheek-by-jowl with houses, stores, offices and gasoline stations into an unmarked, narrow entrance flanked by an ordinary house on the left and a hardware store on the right, then proceed some 20 feet and voila! Forest.

I recently visited this man-made creation with a friend, Susan Dimapilis, and in the space of five minutes found myself slightly disoriented at how quickly I had stepped from one kind of world into another. And, as we discovered later, the forest contained not just trees, but animals, too; fauna that inhabit the wild. No wonder Joselito kept urging us to visit.

The idea of creating a forest in the city did not quite come out of the blue. Love of the outdoors is in Joselito’s blood. His father owned properties in Makati and Quezon City, but his largest landholding consisted of a flourishing 400-hectare rice farm-cum-ranch in Mindoro.

Joselito’s father, Gaudencio, liked to hunt, and he would charter planes to bring his family, complete with maids and drivers, for forays into the wilderness of Mindoro.

The hunting expeditions stopped when the Mindoro farm fell under land reform. What was left to  Llanes family, in addition to the Metro Manila properties, was 15 hectares within Lipa city limits that were planted to coconuts.

One day the young Joselito suggested to his father that they plant the Lipa property to Philippine mahogany that could be harvested for lumber after 20 years. Gaudencio, a lawyer with the heart and the head of a businessman, agreed.

Still, the old man was not all that hard-nosed, because when the mahogany reached the height of a man, he said, “Ang ganda naman nito, huwag na natin putulin.” And Joselito replied that he had been thinking exactly the same thing— “Gawin na lang nating gubat, parang Mindoro.”

After his father passed away, he bought out his six brothers and sisters to become sole owner of the property. Over a period of 20 years, he transformed an unremarkable, flat, low-lying piece of land into rolling terrain with dense growths of trees and bushes that provide a habitat for birds and animals.

Of the original trees of the undeveloped property, only one remains—an awe-inspiring, 150-year old quinine tree, whose girth requires three men to encircle it. However, it stands in solitary magnificence because, to Joselito’s bemusement, the seeds it produces have failed to sprout.

Since then, the forest has been planted to a variety of trees, both native and foreign. There are trees we are familiar with—Philippine mahogany, guijo, almaciga, kamuning, and mulawin.  A less-know one, the palomaria, originates from Batanes. It is a nut-bearing tree and, in times past, were pressed by Ivatans to produce oil for lamps. There is also an unusual, black-stalked bamboo variety.

And, unexpectedly, there’s one Canadian and one American maple, though barely beyond the infancy stage.

There are fruiting trees too, the usual culprits—mangoes, mangosteen, durian, duhat, cacao. But you’ve probably never heard of ciid, which Joselito sourced from Batanes, and whose fruit, he swears, is better than the Chinese lychee.

Together with these native varieties are others like the longan, the Chinese lychee and the macadamia. Despite all those chocolate-covered macadamias from Hawaii, the nuts are actually native to Australia. Therefore, the DNA of this particular tree has taken a long, circuitous route, crossing the Pacific Ocean twice, before finding its destiny in Lipa.

And then there are the spices—cinnamon and cloves—and the new wonder plant sweetener, stevia. A mysterious, nameless, wild shrub has also made a home in the forest. The red fruit, about the size of a duhat, has the unusual power of altering your taste buds for an hour after eating it, so that any sour fruit eaten right after tastes sweet.

In fact, I tried sucking calamansi right after eating the fruit, and true enough, the sourness had been neutralized. It was now slightly sweet, but not overpoweringly so.

But how did Joselito acquire this mystery plant? He shrugs his shoulders: “Birds.”

The forest cover has indeed attracted an avian population:  tikling, quail, orioles, pulangan-tubig, and the supposedly extinct tiktiko have been sighted. Bats have also taken up residence under anahaw leaves; the forest is home to probably the smallest bat in the world—only an inch in length.

The feathered population has not only filled the air with birdsong; their droppings have brought new plants into the forest—some of which Joselito has not been able to identify yet. Some of them bear fruit; and Joselito tests whether they are edible or toxic by brushing them against his lower lip. If his lip goes numb, it’s toxic. He explains that it isn’t safe to simply observe whether birds eat these plants or not; birds can eat some plants that are toxic to humans.

Creating the forest, however, requires not just trees but water. Joselito is careful to point out that the forest is a “secondary” one, in which trees are planted rather closely to each other. In a primary forest, he says, the trees are farther apart, about 20 meters—a ratio that allows each tree not just growing space but a good share of water from rainfall.

A primary forest can survive on rainfall, but a secondary forest has to be watered. The mangosteen tree, in particular, requires watering.

In May, the hottest month of the year, the forest is watered from an underground river, or at least an aquifer pumped to the surface. “But this is usually only for one month,” he hastens to add.

The property in the beginning had no surface water. The discovery of an underwater source is tied up with the construction of his runway (Joselito flies light planes). His first application to build a runway with the Civil Aeronautics Administration of the Philippines (CAAP) was denied; the property was too low.

He then “brought three mountains.” A developer was leveling hills in nearby Plaridel to make a subdivision, and Joselito promptly bought the soil to raise the ground level for the runway which, incidentally, almost exactly faces the sunrise of the summer solstice.

Constructing the runway took 80 trucks and 400 truckloads of soil. At one point the trucks needed to be washed, but there was no surface water available to do the job. According to him, some water pipes were lying around, and he decided to drive some into the ground for a well. Lo and behold, it took just one 20-foot length of pipe to bring water bubbling up to the surface.

Further excavation led to the discovery of the underground river, which apparently is fed by springs on Mount Banahaw, and in turn feeds the man-made lagoon and wells in the forest. The lagoon is Joselito’s gauge of the weather in Mount Banahaw.  If the water in the lagoon rises, that means it has rained on Banahaw.

The underground river is not the only discovery unearthed by excavation. While constructing a pool, workers uncovered seven stones arranged in a semi-circle, with an eighth stone serving as a backrest for one stone. The arrangement was clearly man-made by prehistoric inhabitants of the area.

According to Joselito, an anthropologist was so fascinated by the arrangement that he wanted to chip off a sample of the stone. Joselito demurred, however, and kept the semi-circular seating as part of a pool.

A night spent in the forest (there are three small houses at various locations) rewards one with the sight of fireflies and the chirping of cicadas. A musang (civet cat) might just decide to drop by.

On the other hand, daytime brings not just the twitter of birds, but also the roar of bulldozers and graders.  Just outside of the forest is what Joselito calls the “economic world” that cannot wholly be ignored.  Its most immediate manifestation is the development of a subdivision on the adjacent property.

In a way, though, the subdivision development added to the forest fauna. Joselito narrates how he stood at the fence of the forest one day and watched while the area was being prepared. “Nagbantay ako sa bakod. Wangggg! Pinuputol and mga puno. Nakita ko ang exodus ng mga bayawak, tikling, pugo, mga ahas, pasukan lahat dito. Kasi ginawa ang subdivision.”

A few baboy damo are penned, for food purposes. Joselito also has deer, not native to the place, but given by their former owner. So impressed was he by what Joselito had created with the forest that he refused payment for the deer.

Joselito has lost track of how much he has spent over 20 years to create his own private paradise. It is his refuge, where he can savor peace and contentment and where he is happiest. When in his forest, he does not miss the outside world—”well, except maybe for hot showers and massages.”

Modern life is, for him, almost literally a rat race. The fast-paced tempo of life abroad, he feels, will be replicated in the Philippines. He asked if I have ever been to New York, where people rush, rush, rush, all the time, and then disappear into buildings, “parang mga daga tumatakbo sa loob ng lungga.” He wants none of that.

His major concern now is how to ensure that his forest continues to exist even after he is gone. He is considering setting up a foundation to be called “Pugad” after his parents Purita and Gaudencio.

When asked why he decided to make a forest, his answer is simple: “To show that it can be done. My purpose is to jumpstart nature, and once nature has been jumpstarted, then it can survive. It may take another 20 years, and by that time I’ll be gone. But all nature wants is to be left alone.”