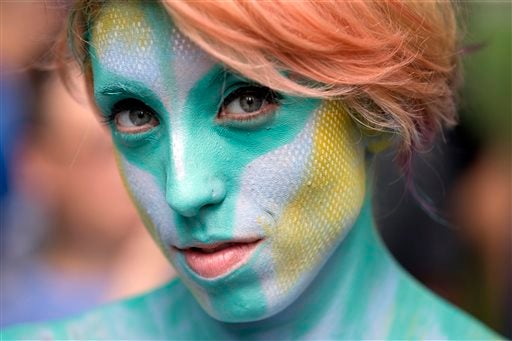 Desiree Urban is painted at Columbus Circle as body-painting artists gathered to decorate nude models as part of an event featuring artist Andy Golub, Saturday, July 26, 2014, in New York. Golub says New York was the only city in the country that would allow his inaugural Bodypainting Day. AP

NEW YORK  — Artists in New York City have painted the bodies of 40 nude models and turned an entrance to Central Park into a celebration of the human form.

Artist Andy Golub says New York was the only city in the country that would allow his inaugural Bodypainting Day. And he says that only happened after a legal battle.

Golub and a model were arrested in 2011 during a body-painting project in Times Square. The city paid model Zoe West a $15,000 settlement after she sued over the arrest.

Public nudity is legal in the city if it’s part of a performance, exhibition or show.

Golub’s event Saturday included a post-painting march down Broadway and a return to Times Square for a photo shoot.